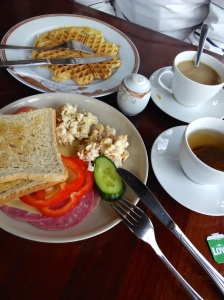 [Here is the photostream of Iceland 2014, for those who prefer pictures to tell a story. 🙂]

Today was a nua-ing day for us, having spent the previous night in the cold trying to chase the northern light without much success.

We had a late but wonderful breakfast at the hotel and after booking bus tours with Gray Line Iceland for northern lights tonight and the Golden Circle for tomorrow, it was almost 11.30am by the time we left the hotel.

We popped by a supermarket 10-11 (something like our 7-11, just bigger) and were horrified by the food prices. A small bottle of water cost around S$4! 😮 There was a Thai supermarket nearby, and the cheapest thing there was probably instant noodles at around S$0.60 per pack. Cup noodles about S$2.

We continued walking and chanced upon some tourist information centre… And the minute we stepped in, we overheard a conversation on how many people saw really beautiful northern lights last night! Green and pink, green and blue… *sobz* We were unlucky, I guess?

Anyway, the staff here was really nice and spent some time explaining about the various tour options to us. We decided to book the Beautiful South Coast tour through her. After getting directions to the Hallgrímskirkja Church and to the famous hotdog stall Bæjarins Beztu Pylsur (literally translated: The best hotdog in town), we continued our walk to the church. 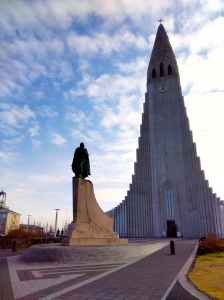 Hallgrímskirkja Church (Church of Hallgrímur) is a Lutheran parish church and at 73m, it is the largest church in Iceland. State Architect Guðjón Samúelsson’s design of the church was commissioned in 1937. He is said to have designed it to resemble the basalt lava flows of Iceland’s landscape and it took 38 years to build the church. Situated in the centre of Reykjavík, it is one of the city’s best-known landmarks and is visible throughout the city.

The church looked impressive from the outside! Looked like a spaceship from certain angles… Haha! The interior was simple but elegant, and we spent some time inside listening to the organ music and hiding from the cold… 😛 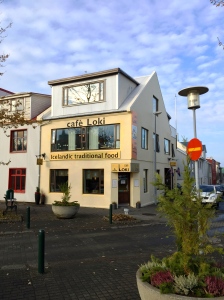 We had a late lunch at Kaffi Loki opposite the church, and decided to try the Icelandic meat soup with flat rye bread and smoked lamb (ISK 2,100). We could also choose either a coffee or tea, so I chose the Loki tea (usually ISK 420) while hubby decided to try the cafe latte (ISK 490). 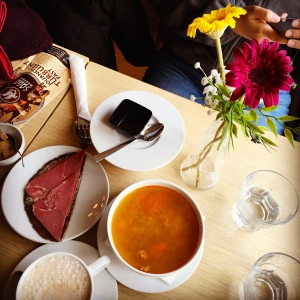 The Loki tea was pretty much a herbal tea, while the cafe latte was much more milky and gentle as compared to the one we tried in London.

The soup reminded me of the pork rib soup back home, with potato and carrot bits, and lamb instead of pork. It was slightly spicy and very delicious! The lamb did not really have a gamey taste, so I was quite happy with it.

The rye bread is sweet and dense, and was quite flavourful. It tasted good by itself and the smoked lamb ham complemented well with it too!

We had seats by the window, and not only had great view of the church, but could also hear the music from the church. A lovely place to spend the afternoon 🙂 And yes, free WiFi that actually worked was a bonus too 🙂 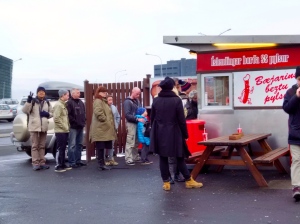 Not a very long queue today! 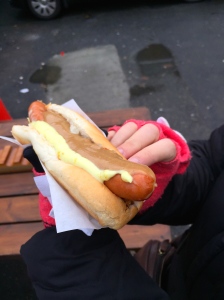 We continued our way in search of “The best hotdog in town”, and found it based on the queue that we saw… The queue wasn’t very long (a couple of groups in front of us, and a few more behind us), but we hardly saw so many people at one place here!

This flagship stand (there are 3 more in the city) has been in continuous operation since 1937 and more than 70% of the 300, 000 population have eaten at this stall! The stall also appeared in the first season of Anthony Bourdain’s travel program No Reservations and even Bill Clinton has eaten here before (although he only had his with mustard)!

We ordered a hotdog bun (ISK 380) with all in (ketchup, sweet mustard, fried onion, raw onion and remoulade, a mayonnaise-based sauce that contains sweet relish). The hotdog, made mostly from Icelandic lamb, along with a bit of pork and beef, was deliciously hot, and the fried onion bits were very addictive! 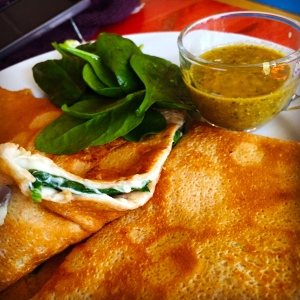 Crepe with spinach and cheese

Happy with our meal, we then just roamed around the streets, entering shops whenever we felt cold (which was every 5 minutes or so), and eventually went for crepes at Eldur. Had a yummy crepe with spinach and cheese (ISK 1,100)!

Checked out more supermarkets and found that Bonus had more reasonable prices… A small bottle of water for around S$2. There is an outlet near our hotel, so we decided to go back to check it out and also rest a bit before our bus tour later.

We slowly made our way back to the bus station and caught the 4:28pm Bus 15 back to our hotel.

Rested a bit in the room before going down to wait for the Gray Line Iceland shuttle. It looked cloudy so we weren’t sure if we would be disappointed again…

Transport picked us up and dropped us at the main office, where we paid ISK 12,800 for the tour. We were on Bus No 3, and set off slightly after 8pm. Our tour guide tried her best to keep us entertained, by pointing out the various landmark in the city centre, and sharing stories of northern lights. She had a great display last night, and had wished that every northern light tour could have been so magical! We also learnt stuff like you could get a diploma in elves after studying for 3 semesters, the 2 different legends on the origins of elves, the most favourite sport here was soccer, followed by golf, as she pointed out the illuminated coke can in the 18-hole golf course; apparently there were 65 golf courses in Iceland! 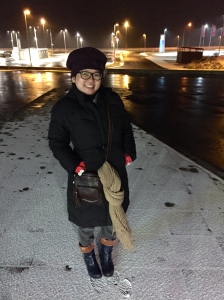 We travelled to the west for more than an hour, and the guide said that we would be skipping the first stop because of the cloudy skies and heavy snowfall, and also because the earlier bus had stopped but saw nothing, so off we went to our toilet break at a nearby N1. Plenty of clean toilets and we shared a roast beef sandwich and hot chocolate for dinner. There was still time when we were done, so we went out to play with the falling snow! Haha!

Back into the bus, we continued on our hunt for the elusive northern lights. Our guide was trying to keep our hopes up and manage our expectations at the same time, assuring us that if we did not get to see any “legal” northern lights tonight, our tickets will be valid for the next 2 years to join back the tour for free. We had driven around 100km to the west, and it really didn’t seem too hopeful as she then announced that we would be making a stop by the nearby hot spring, so that this trip would not be wasted. 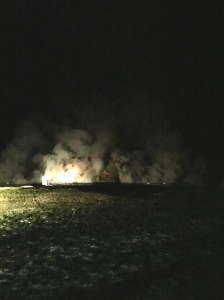 Oh wow! The gusts of “white smoke” ballooning from the hot spring was all over! There were 2 buses that stopped here, and the buses kept their lights shining at the hot spring so that we all could get a good view.

We then began our way back to Reykjavik when suddenly our guide exclaimed that she saw the northern lights and the driver was trying to look for a place to park. That got everyone awake and excited! By the time we reached the parking location, there were already 3 other buses. We quickly got off and were in time to see the lovely display! It wasn’t that crowded with 4 buses of people and everyone went “oOohHhH” and mostly forgot about the cold when the lights started to dance…

We stayed for around 25 minutes before leaving, and the guide announced that that was considered a “legal” northern lights sighting. Wasn’t as pretty as what the guide had mentioned about the previous night though, since it was mostly white to the naked eye.

We were the first to be dropped off, and reached our hotel at 1am, tired but happy!