Half day trip to Johor

The past 2 years have been hard on everyone due to the COVID-19 pandemic. Not only there was no travelling, there was even a Circuit Breaker (aka lock down) in Singapore from Apr 2020 to Jun 2020 where we were only able to go out of our house for essential stuff. This global pandemic has changed the way we work, the way we live and everything… It has been pretty hard for everyone, but light is now finally visible at the end of the tunnel…

After more than 2 years of non-travelling, border restrictions have finally relaxed and we decided to test water and visited our neighbouring country! The exchange rate we gotten from Lucky Plaza was S$1 to RM3.12.

We set off at 6:30am and cleared customs in Woodlands around 7am with hardly any other cars seen. A smooth 40-min drive later, we reached Skudai!

END_OF_DOCUMENT_TOKEN_TO_BE_REPLACED

This is the last day of our trip, but still so many foods to try! We decided to try another 鱼饺面 at Restaurant Wong Soh Siew but again, there was no fish dumpling that we were used to seeing in Singapore… by now, we were beginning to think that there were some definition differences, haha!

We ordered the dry version with a mixture of yellow noodles and kway tiao, simple but good! We enjoyed the fish balls too 🙂 [Total expense RM5]

A quick Google, and found this explanation here: 鱼饺 (yu2 jiao3) is actually 鱼鲛 (also yu2 jiao3), which meant fish paste, hence, 鱼饺面 is typically a noodles dish served with fish balls and fish cakes, as both items were made of fish paste. Mystery solved 😀

We started our day with dim sum breakfast recommended by Dr. K. The dim sum were steamed in a huge bamboo steamer before being pushed to the various tables via a trolley. Food was pretty good! [Total expense RM35.80]

We went to the nearby Kedai Kopi & Makanan Oriental Cafe 东方茶餐室 for breakfast and tried 鱼胶面 Fish Dumpling Noodles (RM5) and 薄饼 Poh Piah (RM3). The noodles in the light broth was nice and the fishballs were bouncy and yummy! however, there was no fish dumpling….

Not too far away was 香薄饼食家 Poh Piah Lwee where we had Poh Piah (RM3) and Laksa with mix of noodles and bee hoon (RM5). Both were satisfying too 🙂 This place seemed to be popular for Nyonya rice dumplings too, but we were too full to try.

We thought the dim sum tasted quite different from the ones we usually have. In general, they were more meaty with barely a hint of the vegetables. We prefer this dim sum place to the one that we tried previously. In particular, we enjoyed the ChaoZhou Mai and Chives Beancurd Skin.

This was the cafe that we wanted to check out during our previous trip, but it was full house when we were there. This time, we went there at 9am, and it was already more than half-full! 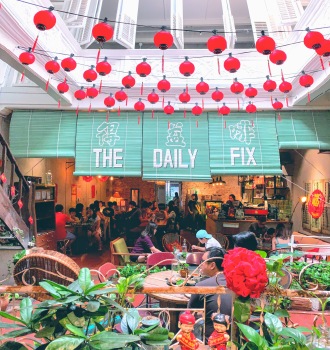 Since we already had breakfast, we only tried the Local Pandan Pancakes (RM13 + 6% Service Tax), which was pretty good! For drinks, we had a double shot Cafe Latte (RM10+) and Matcha Latte (RM11+). Both were not bad.

This was our first stop for the day after clearing customs 🙂 Originally a stall inside a coffee shop, this place has since then expanded to own a full shop front next door. We randomly ordered a few items such as 大肠头，大肠，卤蛋，猪血，三层肉，瘦肉，as well as two bowls of kway tiao 粿条。 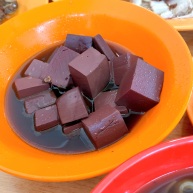 The herbal broth was quite light, making the silky kway tiao an easy slurp. The pig’s blood was more like beancurd with a strong herbal taste. The intestines were very clean and even Ms. K was willing to try some!

And what really impressed us was the freshly deep fried shallots, which made everything so much more addictive! 油葱炸得好香!

Posted on 4 September 2018 by lendeliz

We went on a day trip to Johore again!

And first up was this popular roti canai (or roti prata in Singapore) near the JB custom.

Despite being quite near customs, it took us a little while to find the correct route to this little corner. And it didn’t help that it was raining heavily.

We reached around 10.30am, and split up the work; one went to queue and order, while the rest of us try to secure a table.

We ordered Roti Canai Kosong (RM1 each), and by 10.45am, all roti canai was sold out. We were one of the last few customers, lucky sia!

END_OF_DOCUMENT_TOKEN_TO_BE_REPLACED

Our last morning in Melaka, and we were on our way to check out some cafe when we past by 榮茂茶室 Low Yong Moh Dim Sum Restaurant, and there was no queue 😮 Well, considering we did not have a really good experience with dim sum the previous day, and this was the place where we visited during our first trip to Melaka, we decided that we should not have any dim sum regrets. Yes, we got side-tracked again 😛

The place was just as we remembered how it was, fairly bustling and crowded. Service was prompt and rather friendly. Once we settled down and ordered our Pu-Er tea (RM 1.10 per pax), staff came by with trays of assorted dim sum and we just pointed to whatever we fancied. The prices of the dim sum that we ordered ranged from RM1.70 to RM3, and could go up to RM5. Erm, the menu was not very helpful in determining prices, so just order what you fancy 🙂

While the food was not fancy, it was definitely better than yesterday 😛 We particularly enjoyed the juicy and tender chicken wrapped in aluminium foil. Hubby, as usual, enjoyed his fishballs 😛 And despite the bustle and hustle, time seemed to just slow down while we take in the sights and enjoy our food in this little old-school joint 🙂

We were en-route to our dim sum breakfast, when we walked past this rather popular Bak Kut Teh restaurant seemingly in the middle of nowhere, and so… we postponed dim sum to lunch *LOL*

Service was efficient; basically we were ushered to a table, asked a few questions and viola, our food was served rather quickly… all without seeing the menu 😛