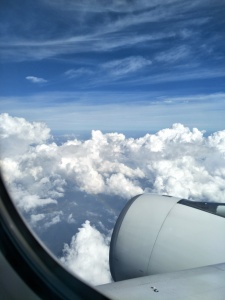 This trip occurred because the promotion for Krisflyer miles 15% discount was ending, and we wanted to use up our miles 😛 It was also our longest trip together ever, for we started our planning with great ambition to cover lots of places, before practicality set in, and we decided that we needed a relaxing trip instead, and decided to focus on Kyushu instead 🙂
END_OF_DOCUMENT_TOKEN_TO_BE_REPLACED 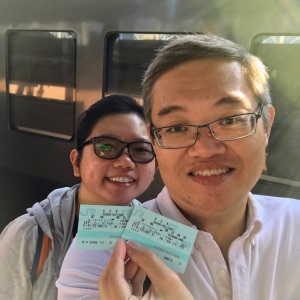 Generally, traveling in Japan can be quite a hassle-free experience if you do your homework beforehand 🙂 Because of their strict compliance to punctuality, all transport options depart and arrive on the dot and it becomes quite seamless to plan connections from one place to another.

And with websites such as hyperdia.com, you can get the train schedules for any day and can plan ahead with a few backup plans thrown in 🙂 Bus schedules are also easily obtainable from the operators’ websites or a simple Google.

There are quite a few transport passes available in Kyushu, and depending on your itinerary (and planning), they could prove to be money savers 🙂
END_OF_DOCUMENT_TOKEN_TO_BE_REPLACED

The coffees that we tried in Fukuoka were in general good!

END_OF_DOCUMENT_TOKEN_TO_BE_REPLACED

With the warning of upcoming typhoon, we ended up at the Canal City Hakata again. We were walking around for lunch inspiration and we were attracted by the huge anago!

Deep frying everything a la order and by hand

The huge anago was awesomely delicious! We also liked that they were not overly generous with the sauce 🙂 For the tempura set meal, each tempura was freshly deep fried in front of us, and served piece by piece as we ate, ensuring that each piece was fresh and hot. The batter was also quite light without being overly oily.

We were really glad that we came here for lunch 🙂

We can’t come to Hakata without visiting 屋台 Yatai! We still recalled the very enjoyable yatai experience from many years ago, but we were unable to find the same stall during this visit. Nonetheless, we had read about a couple of very popular stalls, and decided to check out 屋台小金ちゃん Yatai Kokinchan. We arrived around 6pm, and there was already a queue! 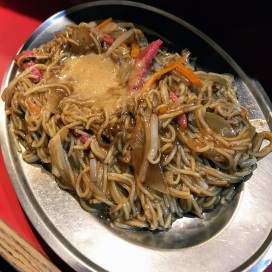 We managed to try quite a few items, including:

The food felt rather homely, and we really enjoy the experience of just hanging around the yatai 🙂 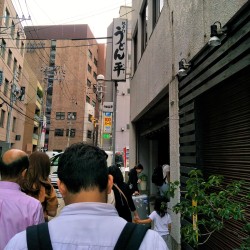 Hubby said that we absolutely gotta go queue for this famous udon!

Since we were staying quite near the place, we figured we would be rather early… NOT 😛

We arrived just before 11.30am, to find a long queue outside, and we did not manage to get in the first seating. However, being a fuss-free place, customers did not linger and after 20 minutes, we were in!

END_OF_DOCUMENT_TOKEN_TO_BE_REPLACED

After watching the impressive laser light fountain show at Canal City Hakata, we decided to look for food within the huge shopping mall itself.

There were a few options, and 平四郎 キャナルシティ店 廻転寿司 Heishirou conveyor belt sushi restaurant looked rather popular. Price ranged from ¥100 to ¥500 per plate (excluding tax), and we spent ¥3024 in total for 8 plates of sushi. 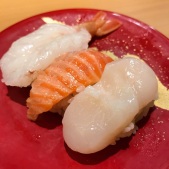 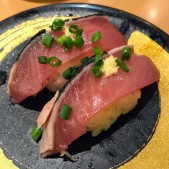 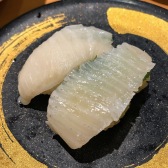 We gotta say that the fish were fresh, but a pity about the sushi rice… 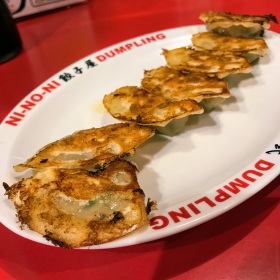 We had the 焼餃子 Pan-fried Gyoza (half price at ¥125 for 7 pieces), as well as the 水餃子 Steamed Gyoza (¥300 for 6). Boy, we were glad that we made this pit stop! The gyozas were very juicy and the skin was rather thin. We really enjoyed this snack food 😀

After a long train ride from Kumamoto to Hakata, and dropping our luggage at our hotel, we went in search for lunch.

We still recalled the very nice もつ鍋 Motsu Nabe which we had tried at a yatai stall in Fukuoka years ago. So when we saw this restaurant specialising in Motsu Nabe, we went in without hesitation.

We ordered the Motsu Nabe Set Meal for 2 pax (¥2560), where we could opt for either rice or Champon noodles. The set also included sides such as Hakata Spicy Cod Roe (raw), Okyuto (seaweed jelly), and pickles (citron radish).

We enjoyed the side dishes, but the Motsu Nabe was quite a disappointment with very little offals… There was probably much more tofu than anything else 😦 The soup and noodles were not bad though.

Note: Menu was available in English, Korean, and Chinese, so it was fairly easy to order.