This was the much anticipated trip of the year! 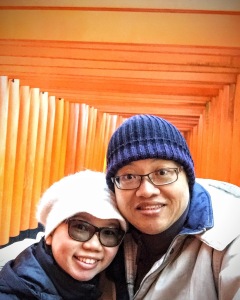 We started planning for this trip very long ago, with the purchase of SQ Super Sweet Deals tickets. Planning went on and on and it was a pity that hubby was down with sore throat right on the day we were departing. Packed a number of medicine to bring with us and the next 2 weeks turned out to be medicine-full days…

But we were very lucky to be able to see 富士山 Mt Fuji from the plane!

Hubby noticed it first (before the pilots, haha!) and quickly whip out his iPhone to take a picture. Ms V and I unfortunately went to the toilet and missed the first sighting. When we came back, the pilot was announcing that passengers seated on the left could see the magnificent mountain, and we spared no time to get back to our seats and shoot! 🙂

The rest of the journey went on well, and I think it’s partly due to the sighting of 富士山 Mt Fuji!

END_OF_DOCUMENT_TOKEN_TO_BE_REPLACED

Posted on 2 December 2015 by lendeliz

This was our first time staying in an Airbnb apartment ever! Hubby was initially quite wary, as he has read some not-so-good and scary Airbnb reports previously. However, we were having a really hard time finding affordable and conveniently-located hotel stays in Tokyo for 3 persons, so eventually, we decided to look for an entire apartment to rent… We figured that Japan should be quite safe 😛

After browsing many apartments, we finally found one with 2 real rooms located near Shinagawa Station with availability that suited our travel plans. Many apartments that said ‘sleep 3’ actually meant that someone had to sleep on sofa bed, or in the living-room that could be converted to sleeping quarters by shifting the furniture, or having 3 people to share a bedroom.

END_OF_DOCUMENT_TOKEN_TO_BE_REPLACED

Posted on 1 December 2015 by lendeliz 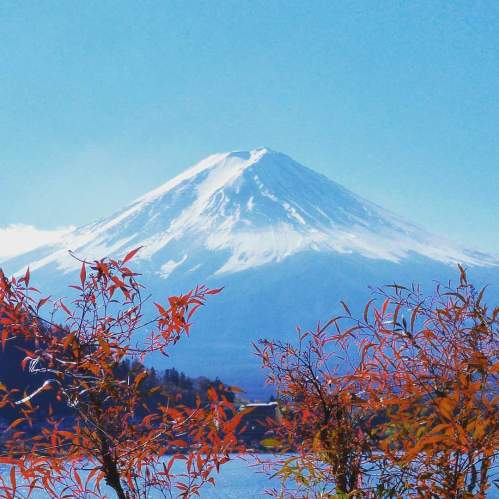 We had initially planned (with flexibility) to go 河口湖 Kawaguchiko (to admire 富士山 Mt Fuji from afar) by bus either on Monday (1 Dec) or Tuesday (2 Dec). We were more keen to go on Monday, as we needed to get up early on Wednesday to catch the early 新幹線 Shinkansen to 京都 Kyoto.

As we got nearer to the dates, the weather forecast for Monday was cloudy, and sunny for Tuesday… Which kind of determined that we would go on Tuesday, because there’s no way to get a clear view of 富士山 Mt Fuji on a cloudy day.

END_OF_DOCUMENT_TOKEN_TO_BE_REPLACED

We had initially wanted to check out イーヨ横丁 Iiyo Yokocho, but somehow ended up 黒塀横丁 Kurobei Yokocho (black-fence alley). However, it looked like a tourist trap with very few customers, and none of the restaurants were appealing to us. We were almost going to settle for one of the nearby restaurant, when hubby recalled that Mr J had mentioned a very famous つけ麺 tsukemen place at Tokyo Ramen Street in Tokyo Station.

Without further ado, we located Tokyo Ramen Street within the massive Tokyo Station, and before I could look for the name of the shop, we spotted the queue 😮 It’s amazing that there were 8 ramen shops here but only one has a snaking queue!

END_OF_DOCUMENT_TOKEN_TO_BE_REPLACED 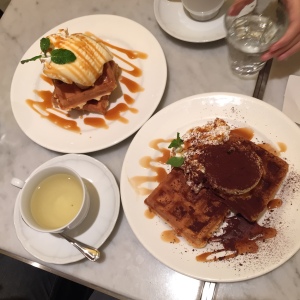 We were looking for a place to rest, and Ms V read about this cafe with excellent, fluffy waffles that tasted like “It was like biting into a crispy cloud“, so that was where we went!

There were 2 branches of NOA CAFE with another one in Harajuku, and apparently this is a popular joint for breakfast among Japanese, and for coffee/dessert break after shopping along the Ginza strip. There are quite a lot to offer on the menu, from waffles to sandwiches, to desserts and mains for breakfast/lunch and coffee/tea/soft drinks/alcohol, and the dining areas are thoughtfully separated into smoking and non-smoking areas.

The waffles were crispy enough and the tiramisu soft and moist with enough rum. We enjoyed our little escape from the cold as we used the free wifi to plan for our dinner!! 🙂 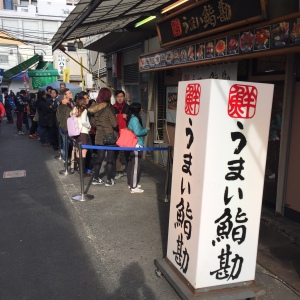 We did not think that we could wake up in time for the tuna auction, so we did the next best thing, which was to aim for breakfast at 築地市場 Tsukiji Fish Market 😛

We reached the market close to 9am in the morning, and just followed the crowd into the fish market. We had initially wanted to visit the wholesale market first, but our attention were diverted when we spotted the snaking queues at the most popular sushi places (like Sushi Dai, Sushi Daiwa and Sushi Bun) 😮

We saw a more manageable queue at うまい鮨勘 Umai Sushikan, and had previously read online that it was also quite value-for-money, so we decided to join in the queue.

While queuing, I could not help but notice the steaming hot omelette stick that the person in front of us was having, so I bought one to share from a stall in the previous aisle. It felt great to have hot food in the cold!

END_OF_DOCUMENT_TOKEN_TO_BE_REPLACED

After our sumptuous lunch at the Farmer’s Market, we took a train to Asakusa and visited the 浅草文化観光センター Asakusa Culture Tourist Information Center observation deck first. 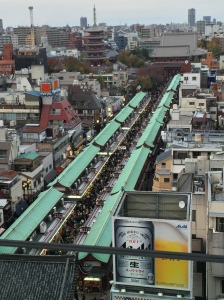 From here we could get a bird’s eye view of the 仲見世通り Nakamise Shopping Street which is a lead-up to 浅草寺 Senso-ji Temple.

Asakusa is a nice area to visit, with an impressive 雷門 Kaminarimon Gate leading to a street of cute, traditional Japanese fares and wares, right up to an equally impressive 浅草寺 Senso-ji Temple which is the oldest temple in Tokyo and one of its most significant.

END_OF_DOCUMENT_TOKEN_TO_BE_REPLACED

For this trip, we were searching for special events in Tokyo and found that there was a regular weekend farmer’s market at United Nations University.

Hubby was very excited about this, and so we planned to go there for lunch. We had initially thought that we would be snacking there, but it turned out that there was actually an entire section devoted to food, with food trucks, proper tables and seats 😀

We were pleasantly surprised by the good quality of the food here! Hope that we will have a chance to re-visit next time to try out the other food trucks 🙂 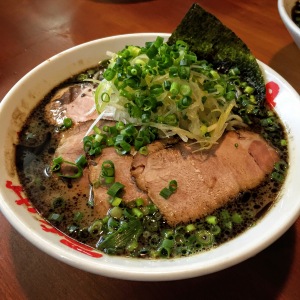 We finally made our last trip of 2015 to the Land of the Rising Sun! And this time we started from Tokyo!

Our first real meal in Tokyo was at Shinagawa. We met JL, who recently started working in Tokyo. Funny that we always meet up when we are out of Singapore… 😛

Anyway, she used the powerful Google Maps to navigate our way to the Shinatatsu Ramen Street 品川駅前「麺達七人衆 品達」. This is an area below the railway tracks of JR Shinagawa Station 品川駅 which has a collection of 7 ramen shops. And Nantsuttei is the first one as you walked into the area (and incidentally one of the only two that were still operating, the others were closed for renovations because of some construction going on at the railway tracks).

Nantsuttei started from Kanagawa and has now quite a number of branches in Tokyo, Thailand and Singapore too (Orchard Central). There is quite a following for its celebrity founder Ichirô Furuya, and judging from the queue that we were seeing at the Shinatatsu branch, this was the ramen for us!