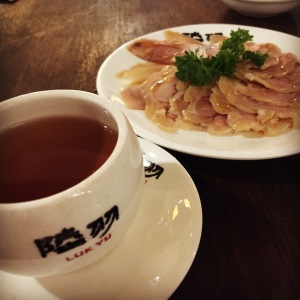 They brand their own cutlery

At the area for a Saturday morning meeting and decided to reward myself with some dim sum!

Being a rather hot day, we decided to try Luk Yu Teahouse & Restaurant at Chinatown Point, which is air-conditioned.

We have tried the Luk Yu Teahouse & Restaurant in Hong Kong but this is apparently not affiliated whatsoever with them. This one in Singapore is under the Swatow Seafood Group of restaurants (there’s another branch in ION).

The deco is distinctively oriental with waiters and waitresses wearing oriental uniforms. They were also quite upmarket with their own set of cutlery down to the sauce dispenser.

We were kind of hungry so we ordered quite a bit. 🙂 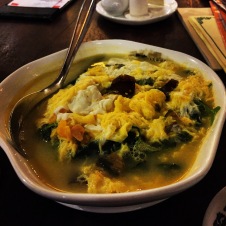 Just a note that only 菊花 and 水仙 (which tasted abit like 铁观音) are $2 per pax, its $9 per pot for 普洱! Luckily the waitress told us the price while confirming our orders…

Note that there is an additional 10% service charge and 7% GST. There is an ongoing daily promotion now, with 30% off all dim sum items from 3pm to 5pm.