Posted on 2 December 2015 by lendeliz

During our 1 day stopover in Kyoto, we had originally planned to go for the night illumination at 清水寺 Kiyomizu-dera. However, it had been a rather hectic itinerary for us so far, and 清水寺 Kiyomizu-dera seemed rather far away.

Instead, after hearing great reviews from a colleague, and also read many good things, we decided to go for the nearer 高台寺 Kodai-ji Temple instead, as we wanted to be nearer to the 祇園 Gion area.

We literally dashed straight from 東福寺 Tofuku-ji Temple to 高台寺 Kodai-ji Temple, and made it just in time for the opening of the night illumination, which, according to its website, started at “sunset”. We actually stopped just outside the temple, wanting to find the entrance and some information, when a staff appeared and invited everyone to go in. The queue was quite orderly and manageable, and we were able to get our tickets (¥600) within 5 minutes of queuing. 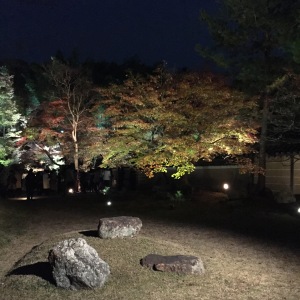 It was our first time here, and we were glad we decided to come here, as there was a wide variety of things to see. Lights were strategically placed for us to enjoy the autumn colours. In particular, the reflections of the autumn foliage was so beautiful!

There was also a free kimono exhibition, and after which, we followed the path to view this awesome laser show! Hubby did not follow us to the kimono exhibition, as he did not want to remove his shoes and kimono was not his cup of tea, but he did manage to catch the laser show from a corner… Perks of being tall, huh? We girls had to take the front seats to get the full view 😛 We also walked through the bamboo groves, which was quite lovely at night.

We enjoyed this night illumination much more than the one at 嵐山 Arashiyama back in 2011, as this was a more compact compound with plenty to see, and it was not as cold as walking in the streets, and definitely not as crowded, thus we could enjoy our relaxed strolls better.