Posted on 3 December 2015 by lendeliz

It was quite a last minute decision to visit 神戸 Kobe, as I had mistakenly thought that the 神戸ルミナリエ Kobe Luminarie 2015 (annual lighting festival in Kobe which started in 1995 in memory of the victims of the Great Hanshin Earthquake of 1995) had started today (3 Dec), which the staff at 姫路駅 Himeji Station had pointed out that it was starting tomorrow (4 Dec), but assured us that we could still see beautiful Christmas lighting at 神戸 Kobe.

Our first stop at 神戸駅 JR Kobe Station was to visit the Tourist Information Centre for some recommendations of 神戸牛 Kobe beef and Christmas illumination. Unfortunately, the recommended places to try Kobe beef were either very expensive for full courses, or had pretty poor online reviews recently. Also, we were too full for a full meal and only wanted to try for fun.

We did a bit more Googling with the free wifi at the centre, and decided to check out 南京町 Nankinmachi which is Kobe Chinatown area (in 元町 Motomachi), as we had read about cheaper alternatives there.

We took a short train ride from 神戸駅 JR Kobe Station to 元町駅 JR Motomachi Station, and once we arrived at 南京町 Nankin-machi (after a short 3min walk from 元町駅 JR Motomachi Station), we were attracted by the light up of the central “lantern” and the loud crackers, and oversized dolls! Apparently today was the opening of the Christmas lightup here in Chinatown! 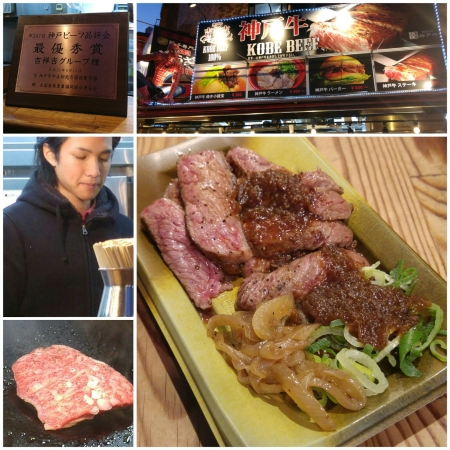 We walked around the central plaza area of Chinatown and soaked ourselves in the cold festive atmosphere. There were some pork bun stall which had attracted quite a long queue but we were here for Kobe beef!

We ended up with 神戸牛吉祥吉南京町店 Kobe Beef Kisshokichi Nankin-machi Ten, where there were standing area available for eating, and ordered the ¥1500 version of Kobe beef steak.

The beef was succulent, juicy and seasoned very well. But we were not too certain this was the REAL Kobe beef. Nevertheless we had lots of fun nibbling and just enjoying the festive atmosphere. 🙂

We then made our way back to 神戸駅 JR Kobe Station and took a slow stroll to 神戸ハーバーランド Kobe Harborland, a shopping district along the waterfront of Kobe’s port area, offering many cafes, restaurants, shops and other amusements.

We managed to make our way from the shopping mall to the surface and just walked along the road to enjoy the lighted-up trees to the harbour front. There were also special Christmas light-up galleries along the way and we saw a music-themed light-up park, and some cartoon lights too!

It was a relaxing night albeit a very hectic day of travelling on trains from 京都 Kyoto to 岡山 Okayama, back to 姫路 Himeji, to 神戸 Kobe and now we are on our way back to 岡山 Okayama! 🙂