Posted on 8 December 2015 by lendeliz

Mr J recommended this place to us, and warned us about the long queues at the Kyoto Station outlet, so we were pretty excited when we found the main shop near our hotel! There was a little entrance next to Lipton cafe, and opposite Jeugia, a guitar shop, and we had to walk through a small alley before reaching the restaurant.

We were comparing the English and Japanese menus, and discovered that for the English version, the main pork dishes all come in sets (additional ¥300 for unlimited servings of barley rice), but since we wanted to minimise our carbohydrates intake, we ordered via the Japanese menu instead: 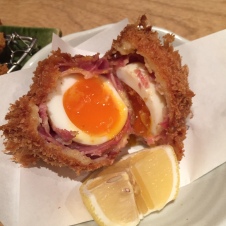 There was unlimited servings of cabbage for both pork dishes, but we only had to top up the cabbage once. The cabbage was cold and crunchy, making this meal feel even healthier 😛

Despite being a chain restaurant, the food was totally worth risking worsening of our sore throats 😛 We tried to drink more fruit and vegetable juice after the meal to boost our immune system, haha!