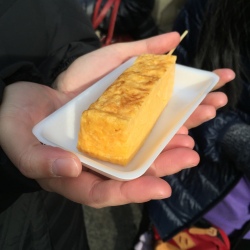 We did not think that we could wake up in time for the tuna auction, so we did the next best thing, which was to aim for breakfast at 築地市場 Tsukiji Fish Market 😛

We reached the market close to 9am in the morning, and just followed the crowd into the fish market. We had initially wanted to visit the wholesale market first, but our attention were diverted when we spotted the snaking queues at the most popular sushi places (like Sushi Dai, Sushi Daiwa and Sushi Bun) 😮

We saw a more manageable queue at うまい鮨勘 Umai Sushikan, and had previously read online that it was also quite value-for-money, so we decided to join in the queue.

While queuing, I could not help but notice the steaming hot omelette stick that the person in front of us was having, so I bought one to share from a stall in the previous aisle. It felt great to have hot food in the cold!