Shifen is our first destination

This was an exciting morning! We woke up at very early at 5:45am to check out of hotel and to go queue for Bus #1061 (stops at 瑞芳 Ruifang) or Bus #1062 (continues to 九份 Jiufen and 金瓜石 Jinguashi after 瑞芳 Ruifang) because we saw a very long queue yesterday afternoon. The first bus on Sunday was at 7:10am and was empty! There were also very few people waiting for the bus early in the morning. So we got up, set alarm for 8:15am, thinking that the ride would be around 90min, and promptly went to nap. Luckily hubby was a light sleeper! I woke up briefly just before 8am and decided to continue to nap a bit more and hubby woke me up just 1min later and pointed to the display screen: next stop Ruifang! Wah seh! 50min ride (NT61? with EasyCard) was way shorter than expected, which meant that we would be able to grab breakfast before the 8.45am train ride! The bus stop was near the police station, about 5min walk away from Ruifang train station. After you get off the bus, turn right and walk straight all the way till you reach a big junction. The train station is on the right side.

The first thing we did was to buy the 平溪線一日週遊券 (Pingxi Railway One Day Pass – NT52) from the ticket counter, which allowed for unlimited train rides on the same day for any stations from 瑞芳 Ruifang to 菁桐 Jingtong. Next was to deposit our backpack so that we could travel lighter (NT17, deposit time from 8am to 8pm). Facing the station, luggage deposit is available outside the station, on the left side.

With all these settled, we made our way to a coffee shop on the same side of the train station because we saw a queue… so the food should be quite good? 😛

We ordered a takeaway for 香雞蛋餅 (Chicken Egg Roll). It was a jittery 10min wait as we watched the lady crack eggs and slap flour mixture onto the frying hot plate, sometimes frying bacon, sometimes frying ham, and sometimes just setting the cooked items aside (no one ordered them??) and no sight of any chicken. There didn’t seem to be any systematic work flow… and many people were waiting for their food.  Just when I thought that we were going to miss the train (it’s an hour to the next one!!), suddenly, she fished out a chicken patty from the fryer and expertly completed our order. We grabbed the egg roll and made a dash to the train platform. With only 5min to spare, we devoured the egg roll quickly… and the taste was delightful! You know, after watching the haphazard manner of cooking, we didn’t have high expectations of the food… but our eyes lit up when we sank our teeth into the slightly soft and chewy (but not mushy) egg/flour part, and then into the firm chicken patty. Savoury with a sweet sauce drizzled on it, we really enjoyed this little snack!

The train was approaching! We quickly queued up at the front and managed to get a seat! Try to queue at the front cabins… most people seemed to stand at back of the platform, but the train actually pulled up at the very front of the platform. Our main objective was to visit 十分瀑布 (Shifen Waterfall), so we got off at Shifen Station first, but most people appeared to want to travel to Pingxi/Jingtong first.

十分老街 (Shifen Old Street) was just next to the station and some of the shops had just opened when we arrived at 9:11am. We ignored the shops first and just followed the crowd to walk to the 十分遊客中心 (Shifen Tourist Center). When you reach a “Y” road with conflicting signs at both the roads on the left and right, telling you to take that road to the tourist center, take the one on the right. The sign at the road on the left is for cars; the one on the right is for those walking. It took us about 20min to reach the tourist center, where we asked for directions from the friendly staff, and refilled our bottles with ice-cold water from the free dispenser 😀

It was yet another 30min walk before we finally reached Shifen Waterfall (NT100 entrace fees, with NT30 discount if you wish to buy the pricey drinks from the cafe within the compound). The waterfall was located within a compound where there were other attractions such as mini animal farm and also areas for BBQ. You could also catch a glimpse of the 眼鏡洞瀑布 (Eyeglass Waterfall) from within the compound.

The sight of the Shifen Waterfall made all the walking very worth! It was breathtaking! At certain angles, you could see rainbows bouncing off the waterfall. We spent some time here, just taking in the view and listening to the gushing sounds of the water. So glad that we decided to make this our first stop 🙂

We then went to check out the Eyeglass Waterfall when the crowds started arriving. Erm, it was less spectacular after seeing the Shifen Waterfall 😛 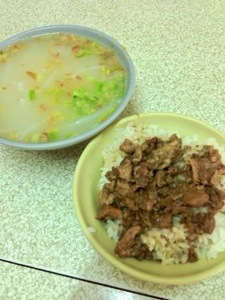 It was 11+am when we returned the Old Street, so we had an early lunch at 榕树下米粉漡 (Vermicelli/Beehoon Soup Under the Banyan Tree). We tried the 米粉漡 (Vermicelli/Beehoon Soup – NT25) and 魯肉飯 (Minced Meat Rice – NT25). The 魯肉飯 was alright; the meat was slightly tough and the rice slightly soggy. The soup was refreshingly sweet, but it was actually thick beehoon, which had a taste in-between thick beehoon and 老鼠粉 (Mee Tai Mak) that we had in Singapore.

Tummies filled, it was time to 放天燈 (Sky Lantern)! Prices are fixed: single colour costs NT200, 4-colours NT250 and 8-colours NT360. There was also a 2-colour one but we didn’t ask about the price. Not all shops carry all types of multi-colour sky lanterns, but anyway, we only wanted the single-colour green one (for health), and we chose the shop 阿媽の天燈 (Grandmother’s Sky Lantern) because the shop owner seemed to be quite helpful. The sky lantern was held upright by the clothes peg and we wrote our wishes on all 4 sides with the calligraphy brushes.

The owner was quite thoughtful and humorous! He offered to provide standard phrases if we didn’t know what to write. He reminded us to indicate our names on the sky lantern (and names of everyone else that we were making the wishes for) and not to dip the brushes into too much ink, otherwise, the ink would drip all over… which still occurred… 😛 He showed us how to hold the lantern and offered to helped us take photos and said that he would make me look slimmer in the photos (is that even possible?). He got me to stand on the right side of the sky lantern because the track was 10cm higher there, so I could appear taller 😛  And he was quite serious with photo-taking, making sure that we were in the ideal positions before snapping away. So snap, snap, snap, snap!

After posing with all 4 sides, it was time to light up the lantern! And that was when we started feeling rain drops 😮 He hastened his process and calmly assured us that our sky lantern will fly! Not to worry since we already managed to get it light up. Holding on to the sky lantern until there was sufficient heat (never thought that it would be so hot), he shouted for us to LET GO! Up, up and away our sky lantern flew! It happened really fast and hubby managed to get a short video of it flying when it was halfway in the sky. A pity it was very cloudy by then, but it was very fun! After cleaning up in the shop (you do get ink on your fingers), and advice from the owner to go Jingtong first (more things to see, and that we would definitely be able to squeeze into the train from Pingxi to Ruifang), then stroll to Pingxi (he claimed it was a 10 min walk), we rushed to catch the 12:13pm train to Jingtong.

Jingtong is a quaint little town, famous for 楊家雞捲 (Pork Roll of the Yangs – NT50). Though the Chinese character 雞 means “chicken”, there is no chicken in this snack at all. We think it might be the dialect. Anyway, it’s supposed to be made from minced meat mixed with yam, onion, etc and wrapped in beancurd skin, and then deep fried. Erm, freshly fried, it was crispy and oily, the fillings were quite crunchy, but just couldn’t taste any meat 😛 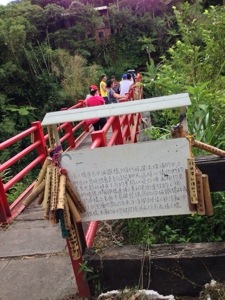 We walked around the area, taking in the sights of the many bamboo sticks hung everywhere, on which people wrote their wishes. Visited the 情人桥 (Lover’s Bridge – lovely view), and then returned back to the Old Street for 碳烤山猪肉 香腸 (Chinese sasuage – NT35), because one of the tourists was holding on to one and it smelt so heavenly. Savoury and sweet, it was yummy indeed!

We then decided to walk to 平溪 (Pingxi), having just missed the train, and wondering if it was indeed a 10 min walk… I think we took 30 min… haha! It would rain a little, then the hot sun returned, then rain again… 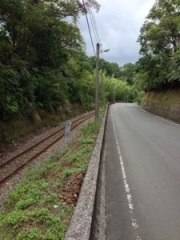 Long walk from Jingtong to Pingxi

We reached Pingxi at 2+pm, and just like Jingtong, it was filled with tourists. Saw a famous sausage stall with a snake-long queue under the rain, so we didn’t bother to try. Instead, we tried the delicious 烤肉哥山豬肉串  (Pork Skewer – NT35 ). Since Pingxi was our last stop, we decided to get some mini sky lanterns as souvenirs (price started from NT50, same as what we saw at Shifen and Jingtong). Happy with our purchases, we got up the 3:20pm train back to Ruifang. The train was quite crowded, but we managed to stand rather comfortably next to the train door on the right (the train door opened on the left most of the time), so we could take in the scenery as the train went along. There was this stretch that was rather scenic; reminded us of the scenic train ride we had when we went to Takayama 🙂

Back to Ruifang, we went to 瑞芳美食街 (Ruifang Food Street) just opposite the train station and got ourselves 阿霞龍鳳腿 (Ah Xia’s Dragon Phoenix Leg – NT10). This delicious snack is made of minced chicken and cabbage that is wrapped by 豬网油 (layer of pork lard which looked like spider web) and then deep fried. We thoroughly enjoyed this freshly fried snack under the rain!

With tummies warmed, we proceeded to the same bus stop that we alighted in the morning to take a bus to 九份 (Jiufen). There were quite a few buses; we just followed a local who told us to get up the bus 😀 First thing we did was to buy some 香脆猪肉紙 and 雞肉紙 (Crispy BBQ Pork and Chicken Sheets – NT100 each small pack) from 勇伯手信坊 (Uncle Yong’s Souvenir Shop) This was a special request from parents, though they didn’t specify the shop, the samples tasted quite good, so we just bought it from here 😀 Since this was our second time to Jiufen together, we decided to try some of the foods/stalls which we didn’t try the first time:

We then popped by 昇平戲院 (Shenping Theatre) before checking in at our Minsu 九份景棧 (Jiufen Jing Zhan). Enjoyed the night view from our room window for a while and we were completely knocked out by 7+ in the evening…