Slept in and went for late breakfast at 姜太太包子店 , this time getting a 韭菜肉包 (chives pork bun – loved the aroma of chives!) and 雪里红肉包 (pickled potherb mustard pork bun – the veggie was slightly bitter and crunchy), as well as the soya bean drink (slightly burnt taste today).

Took MRT to 捷運中山國中站 Zhongshan MRT Station, cross the road to take Bus #74 till terminal and walked less than 5min to reach 上引水產 (Addiction Aquatic Development). Actually we could have taken the bus from Zhongxiao Fuxing too but we didn’t know that till we checked out the bus route. Not much savings in time when comparing taking MRT for 2 stations and taking the bus directly (about 10 min bus ride between the 2 MRT stations).

上引水產 or 台北魚市 Taipei Fish Market is like a supermarket with an integrated dining concept. Within the market on the ground floor, there is a live seafood section, with food processing and cooking services provided. You can stand by the sushi counter and watch the chefs prepare food for you, eat at the seafood bar and or have wine at the bar counter nearby. On the second floor, there is a sit-down hot pot option. On the outside, there is an alfresco BBQ dining option, as well as standing areas with tables for people who choose to buy ready-to-eat foods from the place. The standing area is also near the fruit juice stand, so you can also grab a drink or some fruits while having your meal.

Now which one should I choose?

At 11am, the place was crowded! Many people were eating outside at the standing area. We went in and were wowed by the super big and fresh seafood! Impressive! We were fascinated by the fishes with BIG ROUND eyes. People were buying the live SUPER HUGE crabs home. There were also tons of people queuing for a spot at the sushi counter inside and even more people trying to select sashimi, sushi and cooked items to pack outside to eat.

We had fun exploring the live seafood area and then grabbed ourselves some salmon + tuna + snapper (I think) 3-types-in-1 Sashimi Pack, Beef Sashimi Salad and a Grilled Salmon Head. All these for NT730.

The sashimi were fantastically fresh! The best was the salmon sashimi which looked so lustrous and melted in our mouths… still drooling just thinking about it! The wagyu beef sashimi went very well with all the salad greens and the dressing.

By the time we were done with our bloated stomach, it was already 12+pm.

We decided to take Bus #74 all the way back to 捷運忠孝復興站Zhongxiao Fuxing MRT Station, and took Bus #1815 from the bus stop on the same side of Station Exit 2 just outside SOGO to go 野柳 (Yehliu). Managed to catch the 1:27pm bus (~70min ride, NT69?) and it was another 10-15min walk before we reached 野柳地質公園 (Yeliu Geopark). 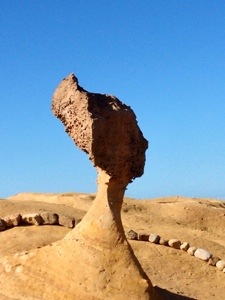 The icon of Yehliu, Queen’s Head

It was a bright and sunny day! Cloudless with the clear blue skies, the pictures we took looked so surreal 😀 But it was also super duper hot! Umbrellas and water are a must! Yeliu is a very scenic place and one can walk very close to the rock formations, but please do not touch them (man-made erosion), and please do not leave your leftover food and water containers in the grooves of the rock formations… saw a few plastic bags and bottles lying around 😦

We had fun trying to figure out the various shapes! Just like what the slightly exasperated tour guide that we passed by said to the people who couldn’t “see”, despite her explanation, 您要发挥一下您的想象力嘛 (you have to use your imagination abit)!!

Spent slightly more than 2 hours there before catching the 5pm Bus #1815 back to Taipei near 捷運忠孝敦化站 Zhongxiao Dunhua MRT Station (90min with traffic jam). Made our way to 咖啡弄 (Coffee Alley) where we had some yummy 草莓冰淇淋鬆餅 (Waffle with Fresh Strawberry and Strawberry Ice-Cream) and 黃金拿破崙千層派 (Golden Napolean Mille-Feuille).

The strawberries with cream was very addictive! The waffles were thick, quite crispy on the outside and not too dense on the inside. The crisp flaky pastry of the mille-feuille was super delicious, but the dessert as a whole was a tad too sweet for our liking. I also had a refreshing and colourful 茉香蜜桃冰茶 (Iced Peach Jasmine Tea) while hubby had the very aromatic 蓝山咖啡 (Blue Mountain Coffee). It was a very nice place to chill out but our hearts chilled slightly at the price of NT726! Gotta pay service charge and tax… NT4 cheaper than lunch at 上引水產! We felt that lunch was more worth it… *think of glistening sashimi*  haha! 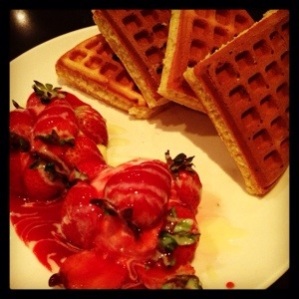 Next stop was to 公館夜市 (Gongguan Night Market) and we got confused by all the directions… and our misconception on night markets.

After we got off at 捷運公館站 Gongguan MRT Station, we went across the road to an optical shop so that I could get disposable some contact lens (35 pairs for NT1000). Actually, the staff told us that the night market was at the street just next to the shop, but when we walked there, we saw only 3 food stalls and the rest were like fixed shops… seemed like the usual shopping areas (we were expecting lots and lots of food stalls). It was relatively quiet and it was a Saturday! The directions which we got online also suggested that the night market was actually at another location opposite the main road. So we walked and walked and walked till we ended up at a rather deserted residential area, and when we finally found someone to ask for directions, we were re-directed to where we started out in the first place 😮 Total confusion!

So we returned, and by then, rather tired and getting a little hungry. Tried a G 肉捲 (Chicken Roll NT35), which was surprisingly delicious with substantial amount of chicken meat and crispy skin and shared a plate of fragrant 麻油凉面 (Chilled Noodles with Sesame Sauce NT50). Along the way, I also grabbed some cheap hair clips at 3 for NT100. 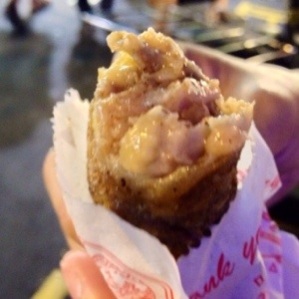 With our bellies filled, we ended the night and headed back to hotel to try to figure out the plans for the next day…