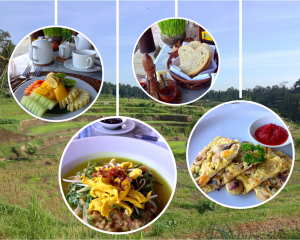 We got up at 7am today in anticipation of our half day tour 🙂 and it was quite lovely to have a outdoor shower in the cooling weather! We felt very refreshed 🙂

Breakfast was Bubur Ayam (Chicken Porridge) for me and Balinese Omelette with Herbs, Mushroom, Tomato and Sausage, with wholemeal bread by the side for hubby.  There was an raw egg hidden in the porridge that I was supposed to mix into the porridge, which I realised rather late 😛 But the porridge was yummy! Hubby thought the omelette was decent but not overly fantastic. We also tried the Balinese coffee and tea; the coffee tasted like our kopitiam coffee but I found the tea a bit too weak for my liking. I also enjoyed the fruit platter because of the jackfruit… hehe.

We had a leisurely breakfast, just taking our time with the food and also enjoying the view by the pool. The owner came by to say hello to the 2 couples having breakfast this morning, so we all got some tips from the owner on where to go for lunch (Kampung Cafe) and where to catch a lovely sunset (Pan Pacific – very far away!).

We started our tour around 9am and it was off to Kintamani for the magnificent view of Mount Batur from the view point, which we had to pay some kind of toll before we could get to the view point. Mount Batur is an active volcano, with Lake Batur which was formed in the crater… It was huge! We spent some time taking in the sights… But not too long, because the view point was just next to the stretch of road where some morning market was on-going… and the smell wasn’t very good 😛 Perhaps because it was rather cloudy, but we didn’t quite think the view was worth so much raving about, or perhaps we heard so much, we had really high expectations… 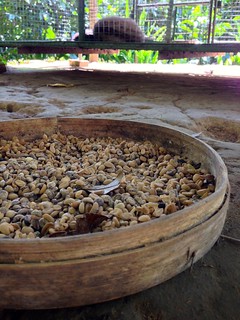 Next stop was to the coffee plantation which was along the way. As we made our way in, we passed by the civet cats in a cage and their poo 😛 Apparently those in the cage were for display purposes; they do allow the civet cats to roam around the plantation, as these very clever cats would pick the best coffee seeds to eat, and so the best stuff came out via their poo 😮

We had a short introduction on the coffee making process, where they repeatedly assured us that the coffee beans from the civet cat’s poo were washed many times and definitely clean, and I got to pound and fry some coffee beans… It was hard work! The beans were fried for an hour each time, and my arm was aching after 3 minutes 😮

We were then led to a sheltered area to sample 12 kinds of coffee and tea for free… Yes, it’s a coffee plantation that sells both coffee and tea apparently. We started from the tea: 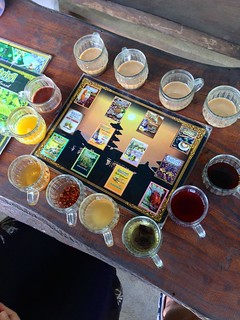 Can you tell which is which?

Then we also decided to pay Rp50,000 to try Kopi Luwak. Well, it was probably the cheapest Kopi Luwat that we will ever try 😛 The verdict? It was quite acidic for me! Hubby thought that it was so-so… Perhaps we had too high expectations? Now we gotta try that elephant coffee for comparison 😛 I got a small pack of Saffron tea for my next gathering with the gals 😀 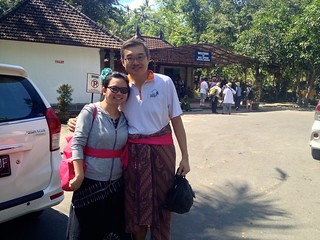 Next stop was the nearby Istana Tampak Siring (Holy Water Temple – Rp15,000 per entry for adults). Our driver had prepared sarong and sashes for us, and helped us to wear them properly. This is a beautiful Hindu temple that is famous for legendary pool that is said to have magical healing powers. Water gushes out from each of the stone carvings at one side of the pool, and we observed how the locals move from left to right, offering prayers and incense at each of the carvings. Some tourists came well prepared with extra clothing and also took part in the rituals. We took our time roaming within the temple grounds; some were off-limits, and there was this pond with really huge kois… I guess the tourists kept them really fat with all the feeding! 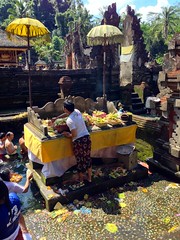 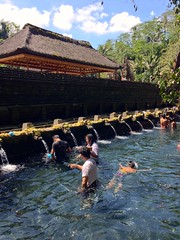 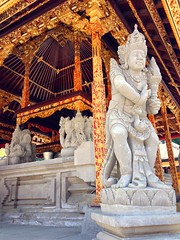 We had to walk through rows and rows of shops to exit, mostly selling similar souvenirs and the vendors were just shouting off prices randomly. For the same item, they would say 10 ringgit, followed by 10 renminbi, etc. That was a huge price difference! There were some interesting stuff being sold, but I left in a hurry after one of the vendors grabbed me… Too aggressive and scary for us! What a huge contrast from the very peaceful temple experience!

After a rather harrowing exit, lunch at Kampong Cafe at the Kampung Resort Ubud. We only realised that it was a resort when we spotted the infinity pool and made some inquiries. It looked like a lovely place to stay in too! I think there are 2 floors; we were seated at the higher floor but we saw the lower floor where people sat around on cushions on the floor with low tables. Looks like a great place to chill out and just take in the sights! We picked a table at a corner so that we could have a good view too 🙂  Gotta say that Jurg, owner of Villa Semana, really did gave us good recommendations. Since he said that everything he had tried here was delicious, we decided to randomly picked some items to try: 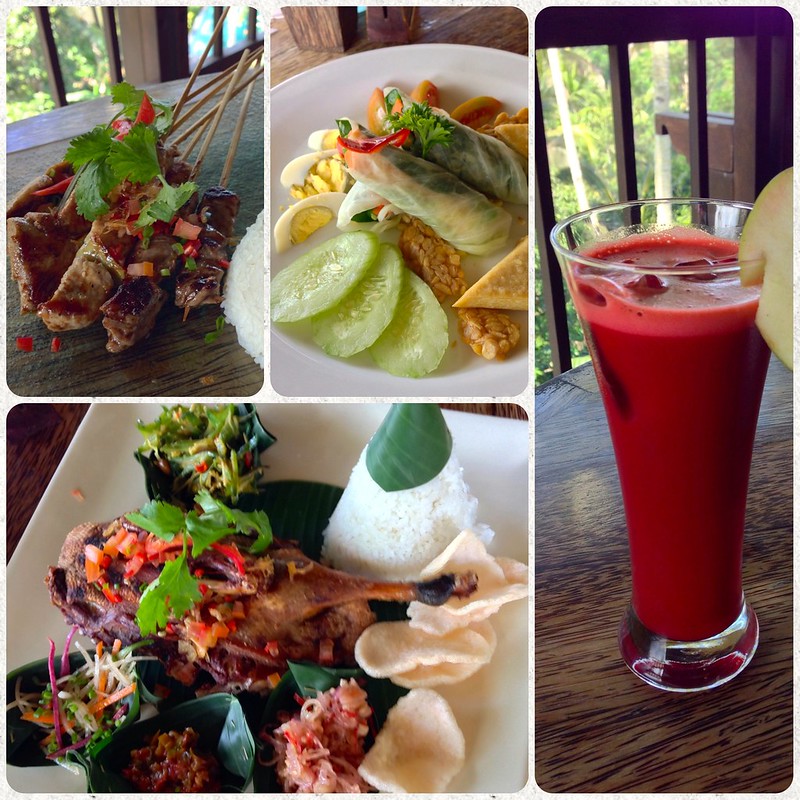 Good food, lovely view and great company – what more could we ask for? A totally enjoyable lunch 🙂

After lunch, our driver drove us along this very long stretch of souvenir shops, where we hopped off the car and walked around for a short while. I was trying to find this cute coconut tea strainer that we used during breakfast this morning, but alas, no luck here. We were unable to communicate well enough with the driver, so he did not understand what we were trying to find. We were here for probably about 45 minutes before deciding to call it a day.

Since we were back to the villa rather early, we booked the signature spa – the 2 hour Semana Harmony, available only after 5pm each evening. It was supposed to be a 10-min foot bath, followed by the 80-min Semana Massage, an a 10-min Lavender Body Wash, followed by the Flora Bath. Today’s massage was more painful than yesterday’s for me, but still quite relaxing. What really wow-ed us today was the flora bath! It was dark but candles were lit up, with a couple of spot lights on. There were salad, fruits and little snacks laid upon 3 little “boats” that could float in the water while we ate. A bottle of chilled sparkling wine was also provided. All these while we relaxed in the pool of warm water, surrounded by the lotus pond, with little frogs hopping around. We felt really connected to the nature! It was really very lovely and romantic 🙂 In fact, probably the most romantic moment throughout the stay! The staff also put a “Do Not Disturb” sign at the spa area, so that no one would disturb us, and we had the entire place to ourselves, for as long as we like, and we definitely took our time 🙂 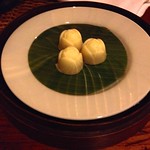 Too full for dinner, we carried the remaining sparkling wine back to our room to enjoy, and had an early night as we had to wake up very early the next morning to visit the morning market.

It was unfortunate that we woke up in the middle of the night to a very stuffy room; it seemed that there was a power outage and the lights and air-conditioning were out. Hubby was very concerned about safety, afterall, it was a very secluded villa, and made calls for the staff to come take a look. At 3am in the morning, the staff was calling up electricians for help, and had very briefly managed to get the power back before it went off again. He did bring along candles in pretty glass, and also showed us where the torchlight was. By the time the power came back the second time, it was almost 4am. By then, we were too tired to care whether there were further power outages and KO-ed till 6am…