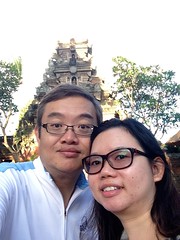 We woke up bright and early at 6am to prepare to go to the morning market! Hubby had French Toast with Ham and Egg, while I stuck to Bubur Ayam 😛

We were feeling quite tired because of the lack of quality sleep the night before due to the power trip. And this morning, we discovered that our safety deposit box in the room had malfunctioned (could be because of a weak battery) and we could not unlock it! 😮 Luckily, the staff was very prompt in action and managed to help us retrieve our stuff.

We were assured that the maintenance team would come by and ensure that everything was fine.

At 8am, we set off with the Chef and driver to the morning market but I think we were not early enough because apparently the market opens from 3am 😮 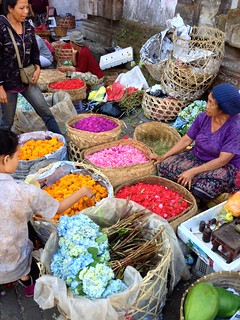 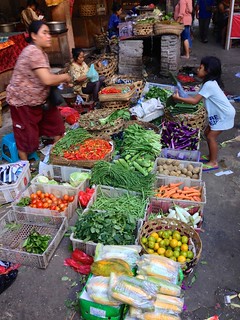 It was rather busy this morning, as it was the eve of a major holiday. Many ladies were seen weaving little holders for incense offerings.

Unfortunately, this little trip failed to live up to our expectations. Our chef did not speak much English and it was our driver who was doing most of the talking, but they had left the introduction of spices to the stall owner, who was more intent on selling us her “wide range of spices used in Bali-style cooking” than to explain what the spices were. Also, the resort had their groceries delivered by selected business partners, so we didn’t get to see any live action of bargaining. Oh well… 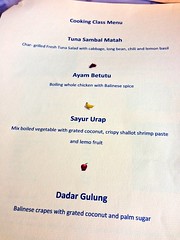 Menu of the Day

Back to the resort, we enjoyed some fresh orange juice while looking through the recipes for the day. Jurg was telling us to be more hardworking as we would be cooking our own lunch… And he shared some story about how a couple did not listen to the chef, ended up with burnt food and asked the chef to let the staff have the food instead -_-” 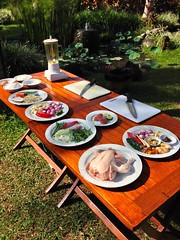 All set for action!

We didn’t think that we will end up that badly, afterall, we had the chef and another English-speaking staff with us the entire time. Chef did not speak too much English, so the other staff would do the more elaborate explanations when required.

He was also helping us to take photos and ensuring that we did not dehydrate by having chilled water on standby the entire time. Gotta say that the staff were all very dedicated to ensuring that their guests were well-taken care of! 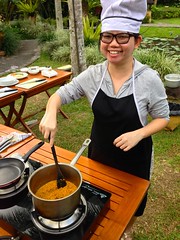 Frying the chopped and blended ingredients… 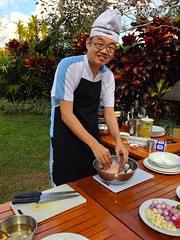 And then rub and stuff it onto the chicken!

First dish was Ayam Betutu… a whole chicken cooked for about an hour in a large pot with spices rubbed all over the skin and stuffed inside the chicken. We spent quite some time chopping and slicing, with Chef teaching us how to identify and slice  the ingredients…

While the chicken was cooking away, we also did preparations for the other dishes. 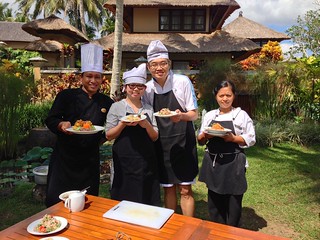 Second dish was Tuna Sambal Matah… The white tuna was pan-fried to medium rare and then cut into bite-sized chunks. All other raw ingredients were slicked and chopped and mixed together, and then the tuna was thrown in.

Third dish was Sayur Urap… frying the shallots was hard work! It took at least 5 minutes and my arm was aching by the time we were done… haha! The Balinese loved fried shallots apparently; frying shallots was something done on a daily basis!

Final dish was Dadar Gulung, a Balinese crepe for dessert 🙂 I totally sucked at trying to make a proper crepe, but hubby was doing really well!

Actually the dishes didn’t  exactly look very good after cooking, but after Chef plated everything, they all looked so delicious! More importantly, they did taste delicious too! 😀 Very happy that our fruits of labour turned out well 🙂 We had a chat with Jurg while eating. It seemed that power outages were quite common due to the huge fluctuation of the electricity, which could melt down the circuit breaker (something along this line). Anyway, by now, the maintenance team had completed maintenance and everything was fine. 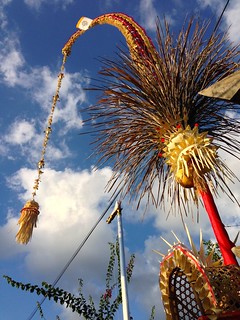 Its festival time at Ubud

We went back to our villa to continue to nua before deciding to venture out for the evening – gotta catch some cultural dance while in Ubud! It was easy to make a reservation for the shuttle bus; we just had to call for service 15 min in advance.

It was a 15-min ride to Ubud Center, and the drop-off/pick-up point was at Ubud Royal Palace, the place where we would be catching the show this evening.

As it was rather early, we decided to walk around before going in search for dinner. There was a very famous restaurant Warung Ibu Oka nearby, which is well-known for Babi Guling (roast pig) and was recommended by Anthony Bourdain in his ‘No Reservations’ show back in 2007. It was also highly recommended by Jurg, who strongly advised us not to behave like typical Singaporeans when we go there and just order the special set without wasting our time to go through the menu 😛

Unfortunately, Warung Ibu Oka was closed for the next 3 days due to the upcoming festival Kulungan on the very next day. Ah! What a disappointment! 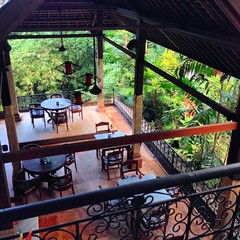 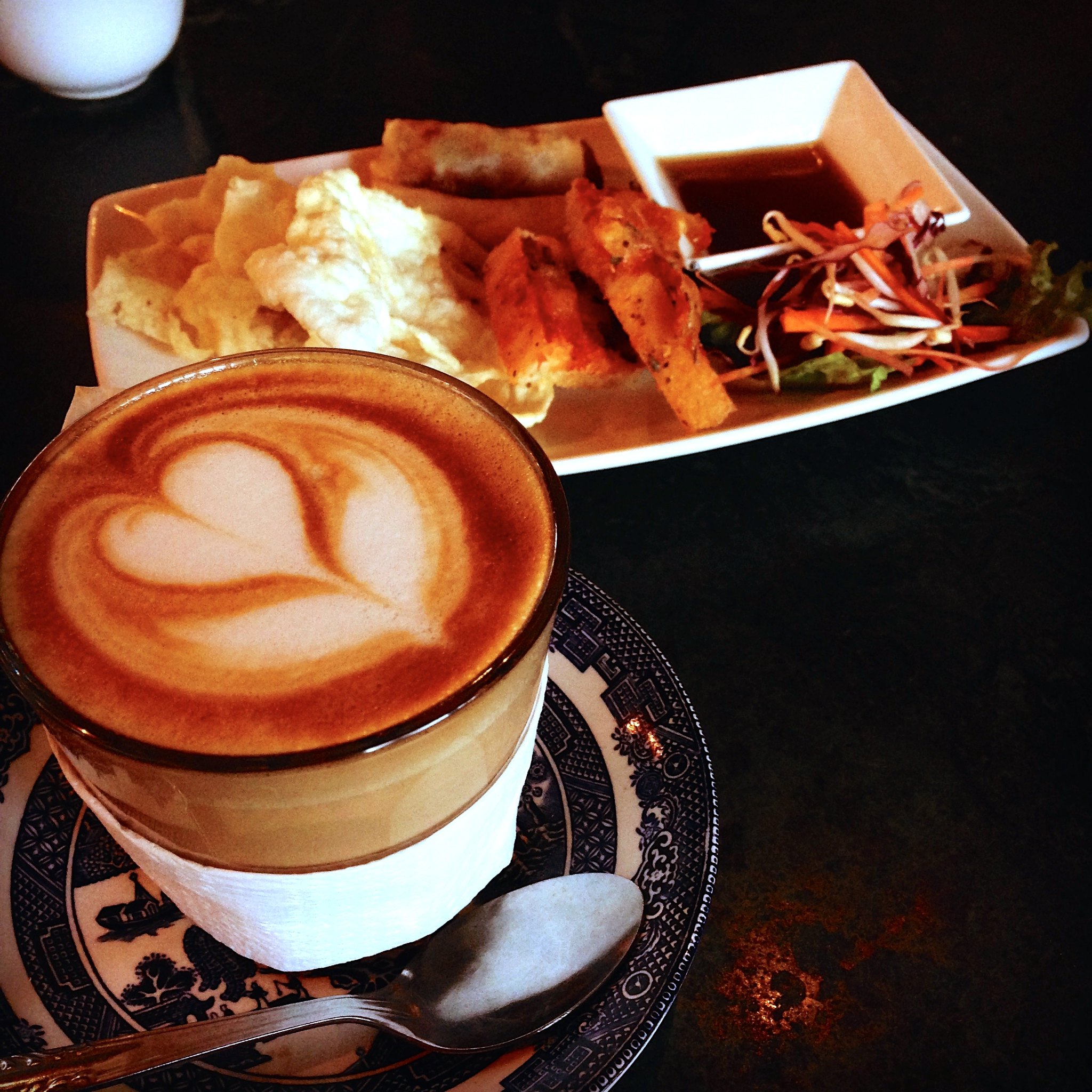 We continued to roam around until we reached Casa Luna Restaurant for an early dinner. We loved the ambience! Very nice place to chill 🙂 We ordered a Cafe Latte, a Banana Vanilla Nutmeg Lassi, Balinese-style Paella, and a Healthy Salad from the specials menu. There was an on-going promotion and we had free tapas 😀

The coffee and salad were excellent! The paella was alright and the lassi was totally overpowered by the banana 😦

After dinner, we continued our stroll. We saw a few groups of children performing the Barong dance. They would walk along the streets with their musical instruments and the barong (a lion-like creature and the king of the spirits, leader of the hosts of good, and enemy of Rangda, the demon queen and mother of all spirit guarders in the mythological traditions of Bali). The music was very catchy and the children looked like they were enjoying themselves very much!

At around  7.10pm,  we returned to Ubud Royal Palace to buy tickets for the Barong Dance at Rp80,000/pax. It was free seating, and  the best seats were already taken up by the time we arrived. We chose to sit at the back, on the raised platform, which was slightly blocked by the lighting but we could see most of the show quite well 🙂 A brochure explaining the performance came along with the ticket, which was very much appreciated, as we would not have understood the performance. 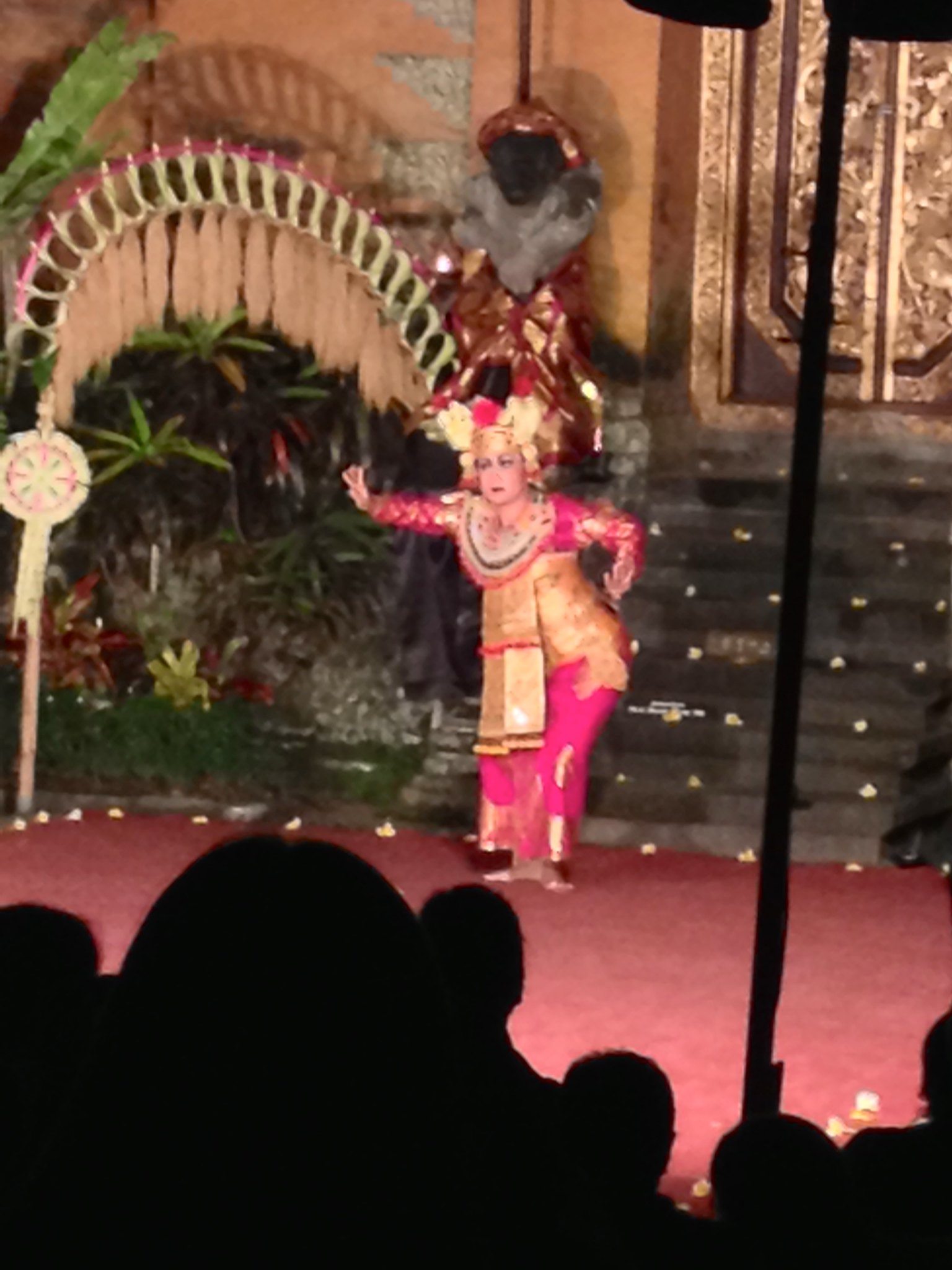 The prelude to Barong Dance 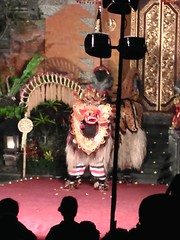 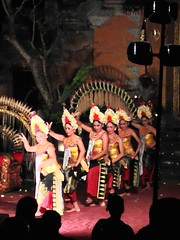 The show lasted 1.5 hours, and was enhanced by the beautiful backdrop of the palace. It was rather interesting initially, until the last 30 minutes or so, where bulk of the performance was spoken in Balinese and we had no idea what was happening. We left close to the end as we did not want to be late in catching the shuttle bus.

There was another couple taking the same shuttle back with us, and we had a little chat on our way back. Turned out that they were from Singapore too!

We returned to our villa under the sky with many stars shining brilliantly; it was such a lovely sight that we all spent some time just standing in the car park and enjoying the view!