Here for dinner after a stroll from office… I wanted to jog, but old le… 😦

We walked from Botanic Garden MRT along Bukit Timah Road and passed by our usual hunt in Cluny Court, and then a changed in sign made us looked up. This used to be Burger Shack, but has now revamped itself into Little Hiro, a Hawaiian-Japanese BBQ & Grill eatery. The owner is the son of the owner of Island Creamery, and Little Hiro was the result of his creative juices after attending a wedding in Hawaii which ended with a Hawaiian-style BBQ. Little Hiro is a tribute to the groom’s father and chef at the BBQ (whose name is Hiro). 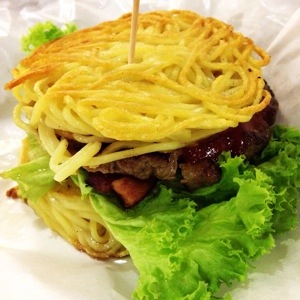 What caught our attention was the BBQ Bacon Bleu Ramen Burger ($11.90)… What is a ramen burger? Well, basically you get ramen instead of bun, much like the rice burger from Mos Burger.

It tasted a bit like hokkien fried noodles… Haha! Can’t say that we like the ramen very much. However, the very thick and juicy beef patty scored full marks! The texture was good, the patty was not dry, and the juice simply oozed out when you bite it, it’s definitely value-for-money!

We also tried the 12-hour BBQ Beef Brisket ($11.90) and Fried Calamari ($7.90). The beef was slightly chewy but was not too bad. But somehow we didn’t think it tasted like beef brisket…

The worst was the Freshly-Squeezed Lemonade (S3.50) which almost tasted like overpriced plain water…

I think we will stick to the burgers the next time we come here :p