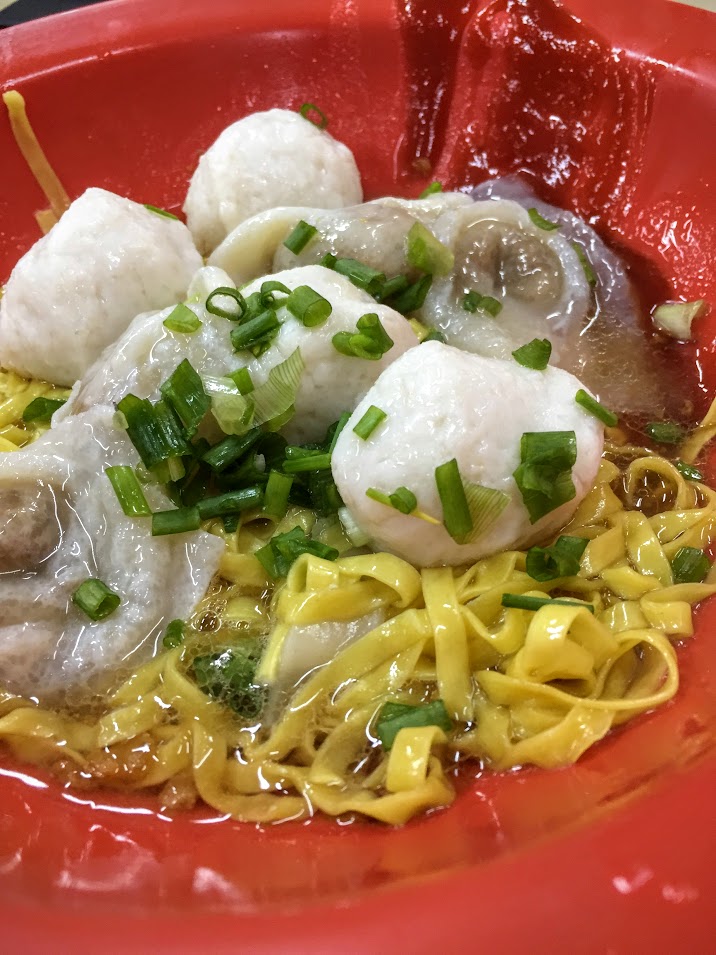 We finally managed to meet up with Ms J for supper at her favourite noodles stall, which was apparently very popular, and especially famous for hand-made fish dumpling “her giao” (鱼饺). When we arrived at the shop close to midnight, we were shocked at the crowd! The tables were sprawling to outside of the shop… and beyond 😮

We quickly made our orders (and were told that the estimated waiting time was around 45 minutes), take our queue number tag, before searching for a table. Cold drinks were self-service, and we just grabbed whatever we wanted from the fridge. Unfortunately, the drinks guy was too busy and though he promised to get us cups of ice later, he totally forgot about it 😦

The wait did not feel too long, especially when we have good company 🙂 Even better, if you enjoy the very retro 1940s-1960s Chinese music? I could imagine my parents singing along!

The meatballs were already sold out by the time they reached our orders, so we had fish balls and fish dumplings. The noodles were pretty standard, and the fish balls were definitely above average; they were very bouncy! However, the highlight of the meal was definitely the fish dumplings! Slightly slimy, the skin was very different from those that we had previously, as it was much more chewy. There was also a good amount of meat and the entire combination was great! We would queue for the fish dumplings again… 😀

Cash payment for both drinks and noodles are to be made when the noodles are served. The staff would calculate on the spot, then we just paid and enjoyed our food. This is not a place where one could linger on after eating, as there would be many pairs of hungry eyes eyeing your table… 😛