Tonight, we decided to check out a smaller night market, 遼寧夜市 Liaoning Night Market. It was only one stop away at 捷運南京復興站 Nanjing Fuxing Station from our hotel.

Upon reaching the station, in our excitement, we exited the nearest gate to find ourselves facing two exits, and nowhere to walk to Exit 2 😮 The station map indicated that it might be a long walk to the other end, so we sought help from the station control. The staff seemed to meet blur tourists like us all the time, and very calmly gave us a laminated card and guided us through the gate and sent us along the direction to the correct exit, located at the green line side. We then passed the card to the staff at the other counter and we were good to go!

Once we were out of Exit 2, we made a right turn to 遼寧街 Liaoning Street, away from the huge pedestrian crossing. We then walked though a somewhat curvy small road to reach 遼寧夜市 Liaoning Night Market. This is a rather local night market and there is no clustering of stalls or closure of roads. We tried out 2 of the more popular stalls. 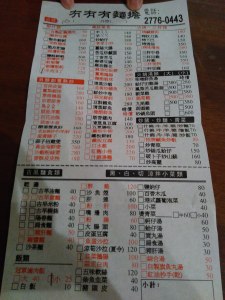 Actually, we do not know how to pronounce the Chinese name, but it’s cute! Start from 冇 and then one extra stroke per character until it became 有 😛 We found out later from the cashier that this is a Hokkien slang meaning ‘From none to many’. 😛

The menu was filled with red and black words, and very interesting dish names. We figured that those in red must be the chef recommendations, because the 滷肉飯 signature braised pork belly rice was in red, and so that was how we narrowed down our options.

We were seated at the second floor, so it was quite a nice and clean environment.

This is a stall with more than 40 years of history selling oden and 担仔麵 Shoulder Pole Noodle (originated from Tainan, it’s a simple noodle snack which was carried on should poles and hence the name).  We didn’t order the noodle because we didn’t want too much carbo. Instead we ordered:

To end our last night of this trip with a bang, we decided to go 饒河夜市 Raohe Night Market!

As we were already at the green line, it was a quick 7 minute MRT ride to 捷運松山站 MRT Songshan Station. The opening of this new line meant that Raohe is no longer a difficult night market to go to (we used to have to alight at 松山火車站 Songshan Train Station and walk a fair bit before reaching it). We took Exit 5 and started from one end of the night market.

Raohe Night Market was still as crowded and vibrant as compared to our 2009 trip! With many stalls selling food and permanent shop fronts selling items ranging from clothes to household items to accessories to IT gadgets, there were definitely many things to eat and shop for!

Since we were already rather full from the previous night market, and it was really very crowded here, we only tried the 雕魚皮 and 无骨鳳爪 Fish Skin and Chicken Feet (NT$200), and 炸鮮奶 Fried Milk Pudding (NT$20 per skewer of 3).

The fish skin was a jelly-like substance and was quite delicious! The chicken feet were very chewy and gave us a good exercise with our jaws. The fried milk pudding was something new to us. The owner would cut a whole slab of hardened milk pudding into cubes and skewer three to a stick and just dipped it into boiling oil. Due to the pressure from the frying, the cubes slowly turned into balls! They were quite chewy too but with very strong milk aroma, yummy!