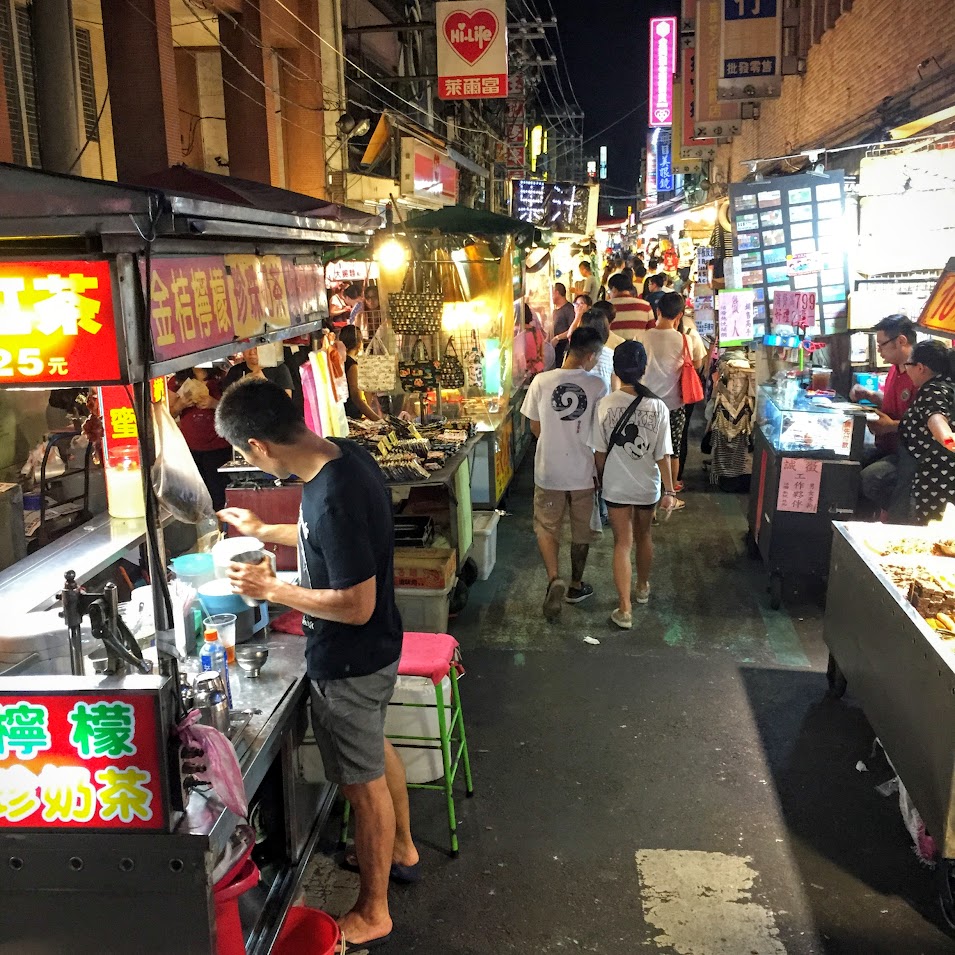 So after our walk at 永康街 Yongkang Street, we decided that we shall conquer a couple of night markets along the 中和新蘆線 Zhonghe Xinglu Line (Line 4) since last night we did the same along the 板南線 Bannan Line (Line 5).

We had initially planned to come here the day before (Thursday), but realized (only in the afternoon) that 輔大夜市 Fuda Night Market closes on Mondays and Thursdays! To think we had thought that all night markets in Taipei open daily, haha.

輔大花園觀光夜市
It was a direct 30-min or so MRT ride from 捷運東門站 MRT Dongmen Station (where 永康街 Yongkang Street is) to 捷運輔大站 MRT Fuda Station. We read that it was quite a walk from the station to the night market so we asked for information at the station control. To our surprise, we were told there is now a FREE shuttle mini bus that can take us directly to the night market!

So we got out of Exit 1 and turned left at the top of the escalator. There is a bus stop on the right, and an elevator on the left. We walked towards the elevator and waited around the area for the free shuttle mini bus. There were no visible sign boards, and we were super lucky because we saw 3 girls hanging around, and as we walked towards them, the shuttle service arrived! 😀 We later realized that this service is available from 6pm to midnight on Tuesdays and Fridays, and 5pm to midnight on weekends. Strangely, we actually caught the shuttle at 5+ on a Friday.

It was a fairly quiet evening for the night market, and some of the stalls were not opened because we were rather early (sky was still bright). There was also a good mix of food and game stalls.

First stall that caught our eyes was the Tou Tori 三星葱腿板燒. We tried the  盐燒雞腿肉 Salt-flavoured (NT 55) and the chicken was very juicy!

Next item we tried was the 臭豆腐香腸 Smelly Beancurd Sausage (NT 40). This stall serves 11 flavours of sausages, but we were very intrigued by this combination. We could taste chunks of pork and beancurd. Interestingly, the taste of smelly beancurd was definitely there, but the smell was not, so it was excellent! This stall also provides raw garlic and tissue paper for free.

Finally, we decided to try 麥格問 Taiwan Waffle (Taiwanwaffle.com). The cranberry version was NT 40, and the staff was kind enough to make a fresh one for hubby! The waffle was sweet with a slightly mochi texture, and there were bits of cranberries as we bit through the waffle, not bad at all 🙂 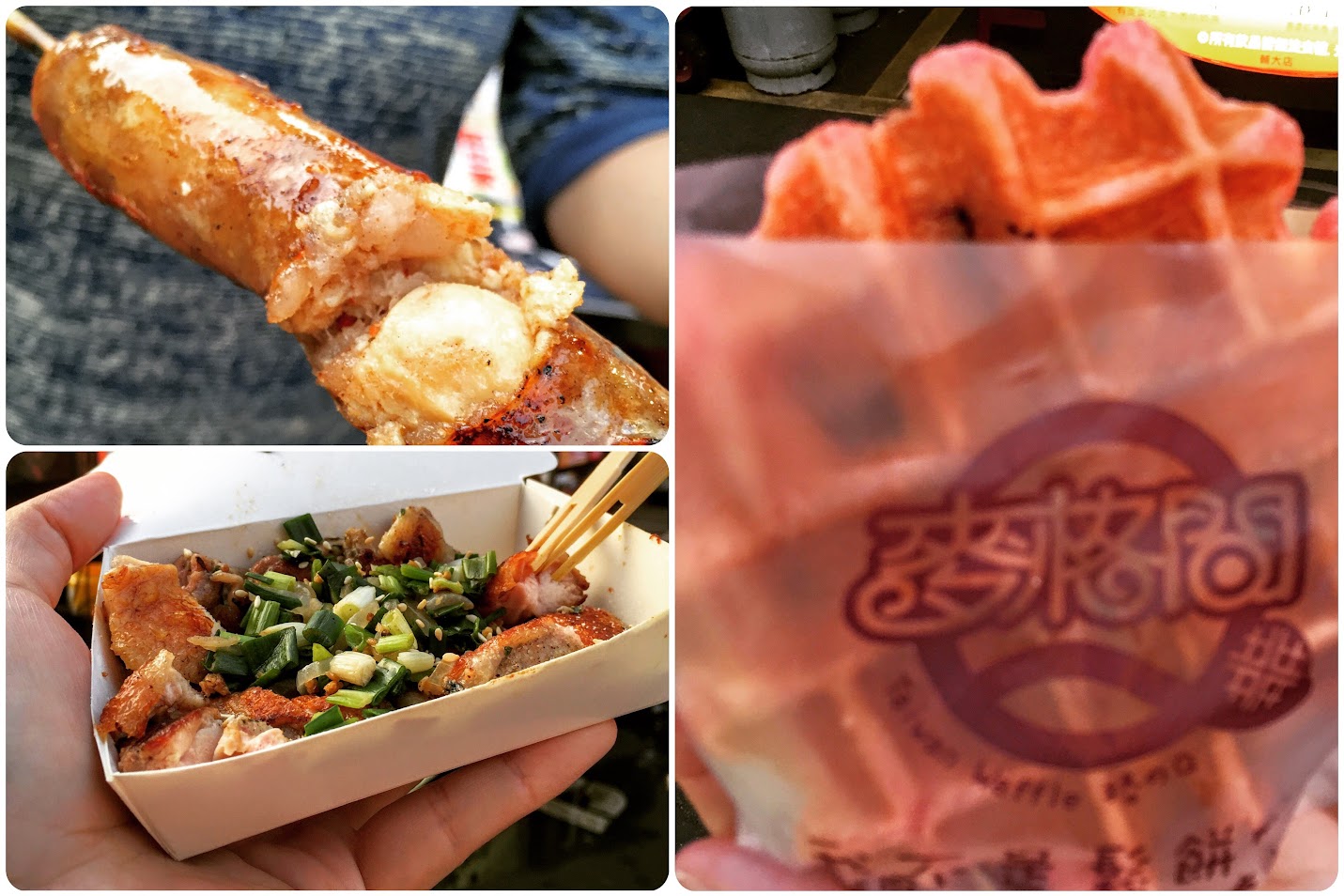 We also saw this very popular stall selling gigantic fried squid… But since I’m not supposed to eat squid for the time being, we will have to come back another time for it!

Feeling satisfied, we caught the shuttle and made our way back to the MRT station for our next destination, 捷運台北橋站 MRT Taipei Bridge Station on the same Orange line.

We reached the station in a short 15 mins time, and could follow the signs easily to 三和夜市 Sanhe Night Market. This is a local night market, as opposed to a tourist night market so the roads are narrower. Another block away is a smaller 文化北路夜市 Cultural Road North Night Market. 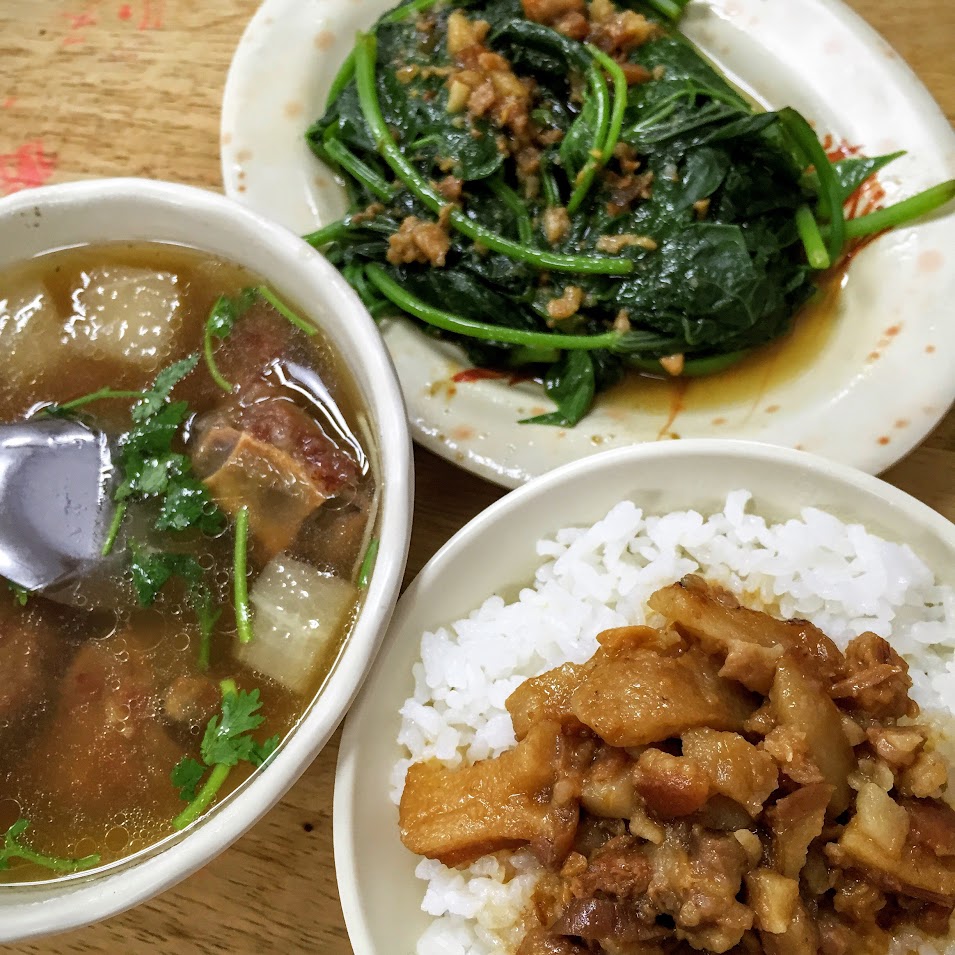 Night had already fallen and we fully soaked ourselves in this local atmosphere. Walked past a brightly-lit stall and we had to try their 魯肉飯 Braised Meat Rice (NT 25), 排骨酥湯 Fried Pork Rib Soup (NT 45) and 地瓜葉 Potato Leaves (NT 30). The braised meat was on the fatty side and hubby enjoyed it a lot. The potato leaves gave us some vegetable fibre to counter the oily pork ribs too.

As we walked along, something interesting caught hubby’s eyes: Cold Noodle!

He was craving for cold noodles since the planning stage of this trip but the famous one (that a famous DJ always goes to whenever he’s in Taipei) seems so far away so we had not really planned on going. So imagine his excitement when he saw the stall! 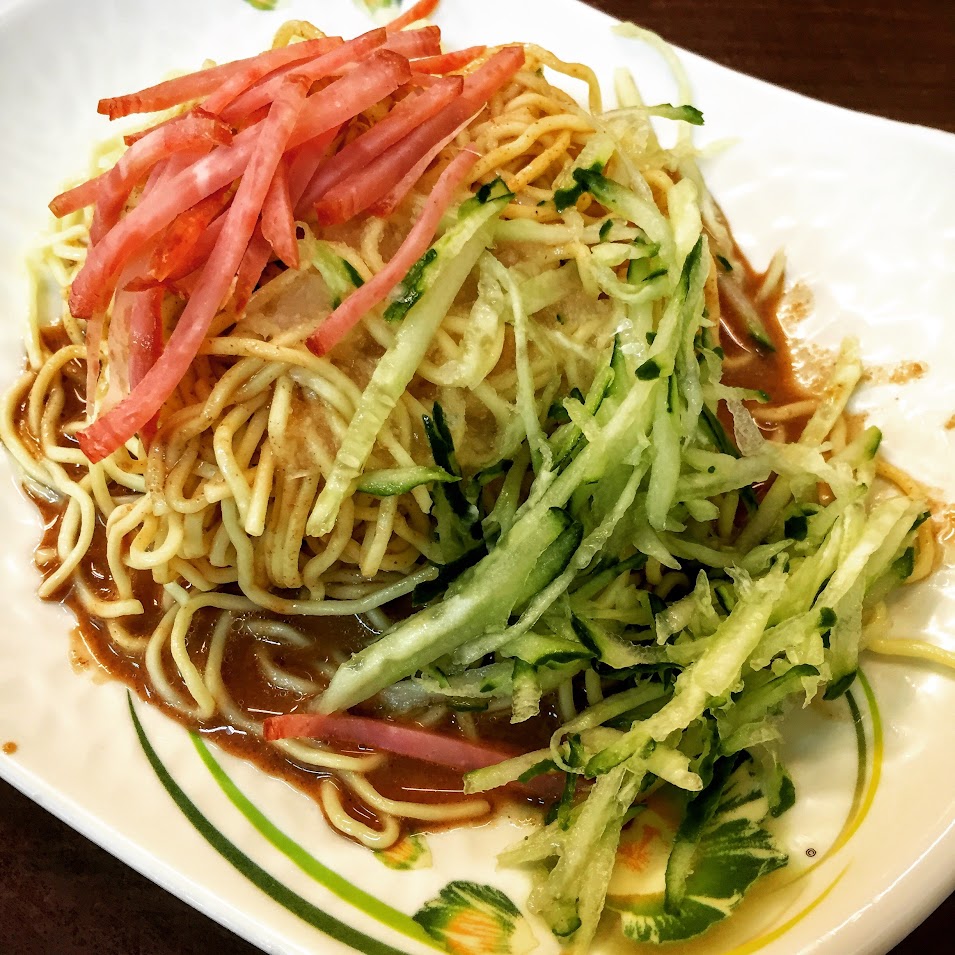 We share a 原味涼麵 Original Cold Noodle (NT 35) and hubby was over the moon with it!

The noodle was (of course) cold and bouncy, and coupled with the cucumber gave a very refreshing taste and crunchy texture to each mouthful. The sesame sauce that was poured over the noodles gave yet another level of shiokness to the otherwise bland noodle mixture. Very satisfying indeed!