Posted on 6 December 2015 by lendeliz 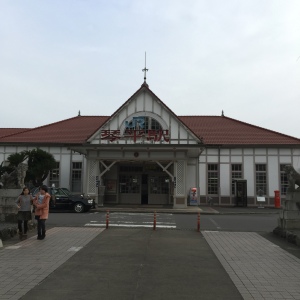 We had initially wanted to visit another island 直島 Naoshima Island today, but we realised that the ferry and bus timings were too few and not too compatible, and decided to give it a miss. After getting some suggestions from the Tourist Information Centre at 高松 Takamatsu, we decided to go to 琴平 Konpirasan (or sometimes spelt as Kompirasan), the location of the famous 金刀比羅宮 Kotohiragu Shrine, as there was plenty to shop, eat, see, and… Climb!  Oh yes, it was a good 785 steps one way to the main hall of the shrine 😛

We still had a valid JR Rail Pass, so it was free for us to travel there. We took the 8:25am train from 高松駅 JR Takamatsu Station, and arrived at 9am to a still sleepy 琴平駅 JR Kotohira Station… There was hardly anyone around. The train station building itself was quite different from others, as it had this European-style to it.

We first visited the 高灯篭 Tall Lantern, which was located just outside the train station, and used to be a landmark for 金毘羅 Konpira pilgrimages. Now, there were some lovely swings which us girls had fun playing with 😛

Following this, we made our way past the bridge, and reached the beginning of the shopping arcade lining the path to the shrine. As we were still quite early, most of the shops were not open yet. For the shops that were opened so early, the shop owners were all very friendly to us! Many offered us walking sticks for free; we just had to return them back to the shop on our way down. However, we declined the offer, as we felt quite fine walking along the gentle slopes, and walking in and out of the shops.

Along the way, we bought a せんべい Senbei (¥200) that was soy sauce flavoured… tasted kind of strangely sweet. We also bought a 灸まん Kyuman (¥75) to share, a local specialty sweet snack. The snack was placed outside the shop, and for visitors who wish to purchase one, all they need to do is to drop their coins in the red container next to the snacks, take the snack and go. Talk about trust! 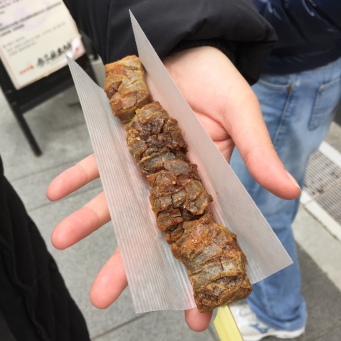 We were slightly confused by this sight, so we still asked the old lady in the shop to verify that we were doing the right thing. She assured us that we just need to drop our coins there, and invited us inside the shop to rest. There were some seats in the shop, and while we were nibbling the snack, she re-appeared with 3 cups of hot green tea for free. We were so touched by her gesture and the unexpected kindness. She also offered the walking sticks when she realised that we were making our way up to the shrine. This was sufficient for us to remember this shop, and when we were back from our shrine visit, we made it a point to return back here to purchase the snacks as souvenirs back home. 🙂 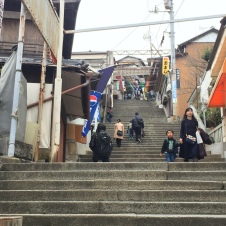 Once we were rested well enough, we continued our way on more small flights of stone steps, walking and stopping at shops to check out the souvenirs. As we walked, there were more and more flights of steps, and seemingly more steps each time. After a rather long stretch of steps, we saw what we thought was the shrine, and that spurred us on to continue to climb! We then discovered that it was just part of the shrine buildings, and we still had many more stone steps to go before reaching the main gate *sweat*

As we walked along, we got to see some beautiful autumn foliage, which took our minds off the climbing a bit 😛

Passing through the 大門 Dai-mon (or オーモン O-mon) Main Gate, we were greeted by 五人百姓 Gonin Byakusho, where there were 5 ladies each under a parasol, and each selling the same stuff! So we Googled, and it appeared that these people were the descendants of the five farmers who were originally granted permission to trade within the premises of the shrine, because of their contributions to the shrine. 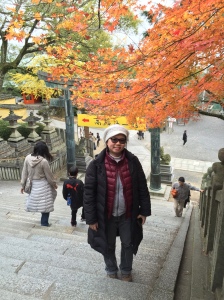 If you wish to visit the shrine, but is unable to climb so many steps, it is also possible to take a bus to the Main Gate, or hire a palanquin, which was not cheap. We saw a lady in it and she looked really crammed up inside.

We also saw the 神馬, or horses for the Gods, and various sculptures, before reaching the main hall, where we enjoyed a very good view of 琴平 Kotohira town.

After the 785 steps, we decided that we had to get the charms here for our parents, despite knowing that this shrine is dedicated to praying for seafaring, and that it was something like a mixture between shrine and temple (though it was officially declared to be a Shinto shrine). The charms were meant for happiness and health anyway, and we had sincerely climbed so many steps to reach it 🙂 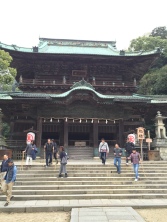 We also visited the Ema Hall and saw a mini submarine on display. At that area, there were some benches, so we rested while deciding where to go next. We read that it was another 583 steps to the inner shrine, so we decided to head back down instead 😛 There were actually other areas to visit within the shrine, including some that required entrance fees, but we were not particularly interested.

By now, most of the shops were opened, so we enjoyed a leisurely stroll back down, and picked one of the Sanuki Udon restaurants こんぴらうどん参道店 Konpira Udon Main Shop for lunch. Lunch sets with tempura ranged from ¥840 to ¥1010, and we tried both dry and soup udon. The udon here was very delicious too, and we preferred the chicken tempura to the prawn tempura, for it was very juicy and tender. 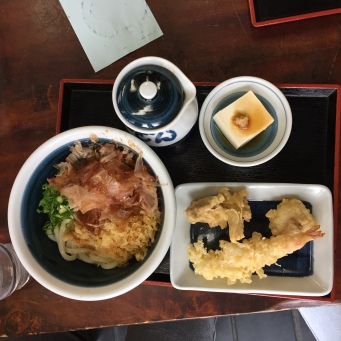 We were done by around 3pm, and made our way back to 高松 Takamatsu. This was a pretty fun day out, and definitely something different from our past trips 🙂

One thought on “Day trip to 琴平 Kotohira”