At first, we ended up at the 三井選品 Mitsui Supermarket across the street, but quickly found out that the actual restaurant was opposite 🙂

The restaurant was at 2 locations and the menu is the same, just that the decorations were different. We were led to the second site 上乘三井 a few shops away, as it appears that the first site 三井本館 required reservations.

三井 Mitsui started off as a small eatery 三井小吃店 in 1992, and expanded to seven restaurants with slightly different concepts but each still serving fresh seafood and delightful Japanese cuisine to customers. We also got to know that 上引水產 Addiction Aquatic Development (which we visited in 2013) is also managed under them.

We picked the 上乘精選料理 Mitsui Premium Set (NT2800, 7 dishes) and 季節特選料理 Seasonal Set (NT2200, 6 dishes). Shortly after, a staff came by to check on our food preference, and also offered to cook the similar items from both sets in different styles so that we could both try all the dishes. We were impressed by their service already!

生魚片 Sashimi Platter: The premium set came with a small 干貝 Abalone and 象拔蚌 Geoduck while the seasonal set came with 赤貝 Akagai. Both had thick cuts of tuna and a gigantic prawn! We felt that the sashimi slices, while being generous, were too thick for our liking.

前菜 Appetizer: The premium set was 魚肝 Fish Liver while the seasonal set was 白蝦 White Prawns. Again they were very generous on the livers and we had 2 big pieces of delectable livers. The white prawns were lightly seasoned and was very refreshing.

This was the first lobster that we got, and the meat was so so sweet and juicy! The abalone was slightly grilled but still retained its chewiness and sweet juice. The vegetables were also crunchy and well-balanced, with cabbage, raddish, corn and apple slices.

By now our stomachs were properly ‘warmed-up’ for what’s to come!

We must also say that we experienced consistently good service throughout. We were given a warm tower each at the start of the meal, and it was promptly replaced after a few dishes, especially when the dishes required us to use our hands. Our plates were also replaced constantly and our teas replenished. 🙂

魚類 Fish: The premium set came with half a tail of 紅喉鹽燒 Salt-grilled Rosy Seabass and the seasonal set was a piece of 銀鱈からすみ焼き Mullet Roe-grilled Cod Fish. The meat of the seabass was very soft and tender which flaked off easily for easy eating. 烏魚子 Mullet roe is a typical Taiwan produce and it’s in season now so it was coated on to the succulent and oily cod fish and grilled. The end result was a beautiful combination of fragrant oil of the fatty fish and saltiness of the mullet. Both dishes also came with a very refreshing 金桔 preserved kumquat.

鱈場蟹 Red King Crab: The main highlight of the sets has to be the red king crabs from Hokkaido. The premium set was 活鱈場蟹酢 Vinegar-boiled and the seasonal set was 活鱈場蟹塩烤 Salt-grilled. Both were sweet, tender and juicy and we had fun trying to extract the meat out of the shells! 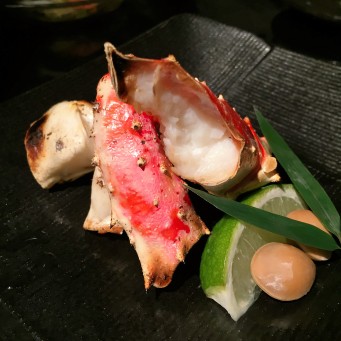 肉類 Meat: We chose a 牛肉きの子焼物 Beef and a 烤羊排 Lamb for the 2 sets so that we could get to try as many different dishes. 🙂 The beef was medium-rare and perfectly grilled. Wifey enjoyed in very much. The lamb was also rid of the usual gamey smell by a spread of mint sauce.

寿司 Sushi: This is only for the premium set, and we had 海胆寿司 Uni Sushi and ひらめがわ寿司 Flounder Sushi. The uni was fresh and creamy which instantly melted in wifey’s mouth. The flounder was slightly torched to force its oil out and that added much flavour to the otherwise plain sushi.

湯 Soup: The premium set was presented with みる貝薯蕷吸 Shell and Yam Soup and the seasonal set 車蝦南瓜汁 Prawn in Pumpkin Soup. The shell soup was a clear soup and our taste-buds were refreshed with the many spring onion shreds. The pumpkin soup was not too heavy even though it was a cream soup and the huge kuruma prawn provided the much needed crunch. 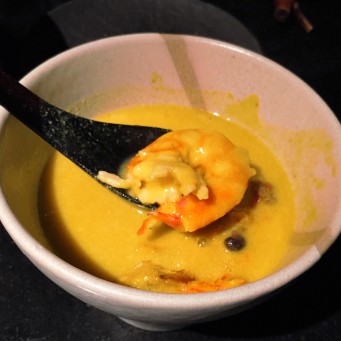 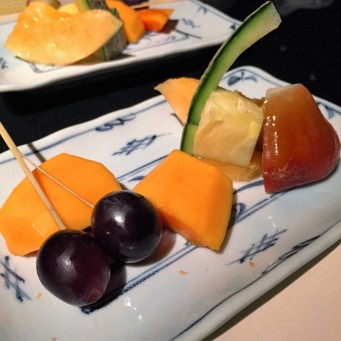 附贈 Complimentary: By now we were already bursting the seams of our jeans but they surprised us with 季節水果 Fresh Fruits and 味增芝士蛋糕 Savoury Miso Cheesecake. The very light cheesecake was topped with lightly-grilled miso and a sprinkle of bonito flakes which provided a much balanced end to a great meal!