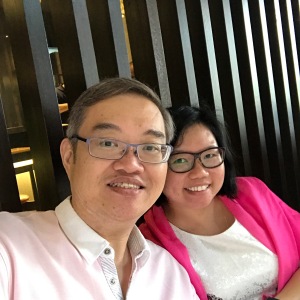 Our foodie journey today brought us to the world’s first Michelin-starred ramen eatery, Tsuta, which opened it’s first overseas outlet at Pacific Plaza (it has since opened another outlet at 18 Tai Seng).

We were here during late afternoon, and the queue was fairly manageable. Since we were still rather full, we did not mind the 20-minute wait, especially when there were seats available in the queue.

We thought that this place had a rather efficient system, where we could just place our orders and pay via the kiosk at the entrance of the restaurant, before the staff brought us to our seats, where we could watch the chefs in action.

Food was served rather quickly too, and we managed to finish our meal in a jiffy too.

We tried both Ajitama Shoyu Soba ($16.80 nett) and Ajitama Shio Soba ($16.80), which came with a flavoured egg, on top of the base soup with a slice of char siu and some bamboo shoots.

Handmade from 4 different types of whole wheat and whole grains flours, we felt that texture and thickness of the noodles was was just right; not overly thin, and with just enough bite. The flavoured eggs were runny and delicious too! The char siu was made from chilled Canadian pork collar, which was a tad too lean for our liking. We definitely preferred the earthy shoyu soup base, which really went well with the truffle taste, as the relatively lighter shio soup base was a tad too salty for us.