We have watched enough Korean dramas to know that visiting a 찜질방 (Jjimjilbang) 汗蒸幕, (aka Korean public bathhouse), should be part of our itinerary, and since we were scheduled to touch down at Incheon Airport around 22:15 local time (GMT+7), we figured that an overnight stay in a Jjimjilbang would be an unique experience, and a cheaper alternative to a hotel stay, especially since we wanted to leave for Busan the very next morning.

Initially, we wanted to take the overnight bus from the airport to Busan directly, but the online booking of the very popular tickets was too difficult, especially when we had to figure things out in Korean.

The next thing we did was to source for a suitable Jjimjilbang, and the 2 most readily available in English were Dragon Hill Spa, and Siloam Fire Pot Sauna. Eventually, we decided on Siloam (also spelt as Silloam), because it seemed less touristy and crowded.

While the last express train from Incheon Airport to Seoul Station departs at 21:50, the all-stop trains are still in service till 23:40. Since we managed to clear immigration and collected our luggages within the hour, we were able to top up our T-money transport card in time to catch the 23:20 all-stop train. Yippee! We did not have to wait for the late night bus service, which was also more expensive than the train.

The train service was definitely tourist-friendly, with announcements made in Korean, English, Mandarin, and Japanese. Well, some of the advertisements were in Chinese, so that spoke volumes about where the tourist money was coming from. 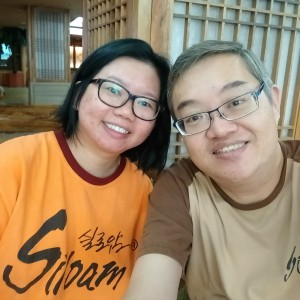 One hour later, we arrived at Seoul Station, and it was quite a fair bit of walk to Exit 1, after which we followed instructions found in this blog to Siloam. Despite reading up on what to expect prior to the visit, we still got a little confused 😛

Once we were there, we paid the entrance fees of ₩15,000 (~S$18) per adult, and bade farewell to hubby (the changing rooms and baths are separated by gender), after synchronising the time that we would meet at the Level 2 common area.

There were luggage rooms available at both genders’ locker rooms; once we changed out of our shoes,  we just brought the shoe locker key to the counter, and pointed at our large luggage bags. The counter staff then provided a tag each for the luggage bags, as well as the locker keys for our other smaller bags. For ladies, 2 small towels were given, for gentlemen, you would be able to find the towels after you are done with your bath.

I had enough time for a quick shower and to try out a couple of baths before meeting hubby. Soon enough, Ms V and Ms W joined us, and we decided that we should have some supper before sleeping. 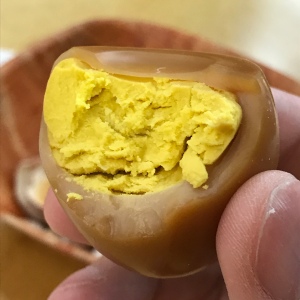 The eggs were not boiled in water but cooked on a stone-plate in the sauna for 3 hours. It’s eaten with some salt, and the egg white had a lovely toasted taste. The rice punch, made of water, malted barley flour, sugar and cooked rice, was extremely sweet, and we could not finish it. By now, it was already past 02:00, and it was time to find some place to sleep!

The sleeping rooms in Level 5, split by gender, felt too warm (which Ms V and Ms W ended up in eventually), but we were also feeling quite uncomfortable sleeping in the open halls (the better spots were already taken up). Hubby and I ended up sleeping in the Red Clay Cave, as we managed to find 2 spots side by side. We managed to get some sleep, in between loud snoring and phone ringing.

We woke up around 05:30 and went to check out the different fomentation rooms. Ah, gotta say that we were not too good with heat, for we could barely make it into the 50 degree Celsius rooms, and immediately closed the door to the 60 degree Celsius one. We didn’t even attempt to open the door to the hotter ones, but there were locals who could stay inside! The cooler rooms were fully occupied by guests who looked like they were sleeping really well.

We were back to the same restaurant for breakfast, and hubby and I shared a 사골떡만두국 (Sagol Tteok Mandu Guk) Short Beef Rib Soup with Rice Cakes and Dumplings 牛骨年糕餃子湯 (₩7,000). Nothing beats having something warm to drink in the morning! We particularly enjoyed the mandu, which was juicy and meaty. Gotta say that my first taste of rice cake in South Korea did not improve my impression of it, haha 😛 Ms W had 순두부 찌개 (Sundubu Jjigae ) Spicy Soft Tofu Stew 嫩豆腐鍋 (₩7,000),  which was way too spicy for us, while Ms V tried the 떡라면 (Tteok Ramyeon)Ramen with Rice Cake 年糕拉麵 (₩4,000), and who could resist ramen? The soup and ramen came with 2 side dishes, while the tofu stew came with 5 side dishes, which was pretty common for stew apparently. 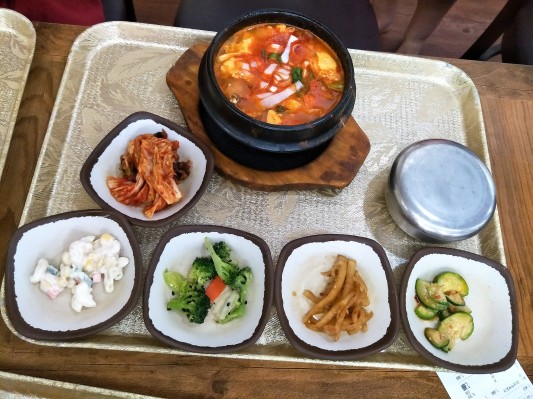 After our hearty breakfast, we went for showers and tried more baths, and we particularly enjoyed this waterfall bath that had a strong column of water splash down at our sore shoulders. I had initially wanted to try the cold bath, but when I had an accidental touch with the very cold water while another lady was splashing herself in the bath, I changed my mind immediately, haha! The 40 degree Celsius bath was way more comfortable. Also, I had more time and could finally try out the legendary scrub which I had heard so much about on TV shows!

I was attended to by a lady who could speak some Mandarin (and throughout the trip, we realised that more people understood Mandarin than English here). Her instructions were simple; I basically flipped and turned whenever she wanted me to. I took the most basic scrub for ₩20,000, but there were various add-ons available, such as washing of hair, massage, etc for an additional cost. I just kept repeating “just scrub” and shook my head at the add-ons whenever they asked. I think the scrub lasted a good 10 to 15 minutes, and it was not as painful as I had thought it might be. In fact, I felt that facial extraction was way more painful! The scrub ended with the lady soaping me all over, and said “finished” before almost sliding me off the plastic table, hehe. After a quick shower, I got changed and met the rest. Payment of the scrub was done at the reception counter when I exchanged my locker key for the shoe locker key.

We left the place around 09:30, and made our way back to Seoul KTX Station to exchange for our 2-day flexible pass voucher, as well as to book our KTX tickets to and fro Busan.

This was definitely an unique experience for us, and we were glad that we got to try it out 🙂