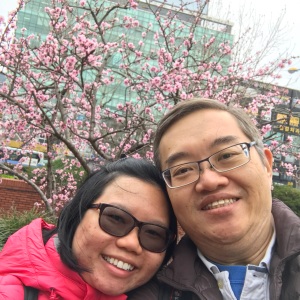 We were all very interested in seeing cherry blossoms, and while hubby had seen the beautiful blooms many years ago in Japan, the rest of us have only seen them online and on TV shows. Initially, we intended to fly into Japan first before travelling to South Korea (the flowers started blooming earlier in certain parts of Japan, and the variety of flowers were different), but the exorbitant air fares made us decide to go for a less ambitious trip 😛

We read about the largest cherry blossom festival in 진해 Jinhae 镇海, and decided that we would focus on 부산 Busan 釜山, and 서울 Seoul 首爾, while keeping things flexible in Busan so that we could go for a day trip to Jinhae, when the cherry trees were in full bloom.

Also, Ms. V and Ms. W had covered Seoul in their recent trip, so they would fly back to Singapore earlier, while hubby and I continued our exploration. Our itinerary were as followed: