It was quite confusing as to where the location of 봉추찜닭 Bongchu Jjimdak 鳳雛燉雞 was. We had searched for the location which indicated it was above Innisfree in 명동 Myeongdong 明洞, but when we reached, there was no such restaurant!

Thankfully, the staff at Innisfree directed us to another outlet 2 blocks away,  which was near the Korean Money Museum, and it was 2 blocks away.

Once we were seated, we were presented with the non-Korean menu (mainly English with some Chinese translation), making it easy for us to order.

The main menu was also simple enough; there was only 찜닭 (Jjimdak) Korean Braised Chicken 燉雞 in 3 different portions, and 3 different level of spiciness, and whether you would prefer boneless chicken or not. 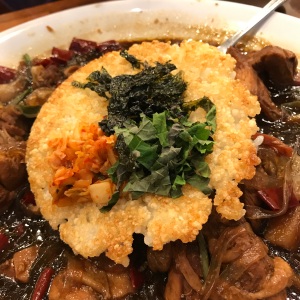 We opted for the medium (which was meant for 3 pax), and non-spicy (₩32,000) because I was already nursing a sore throat. Despite being the non-spicy version, it was actually a little spicy 😛

We further topped up an additional ₩2,500 for 누룽지 (Nurungji) Scorched Rice 鍋巴 halfway through our meal, for the gravy was super awesome, but felt a tad too salty without some rice.

The chicken was very tender and flavourful, and the potato noodles really soaked up all the goodness of the gravy. We were pretty full after wiping clean the food!

Note: There was a no-bones option, which was ₩2,000 more expensive, but we felt that the chicken would be more flavourful with bones in. Wi-Fi and water was available for free. We also met a tour group here, so it might be a good idea to come earlier 🙂