Posted on 2 September 2017 by lendeliz

お好み焼「美津の」Mizuno Okonomiyaki was opened in 1945, just after World War II, making it the oldest お好み焼き Okonomiyaki restaurant in 大阪 Osaka.

We were there just before 5pm, and there was already a queue.

The staff would offer the menu (Chinese and English menus available) to the customers and take their orders while still in the queue. You are not allowed to add orders once you enter the restaurant, so choose wisely 🙂

The wait was bearable, and the queue moved rather fast.

We took the set (¥2105) which consisted of mini 山芋焼 Yamaimoyaki, and モダン焼 Modanyaki, which were the two very popular items here.

When it was almost our turn, we were led in to wait within the restaurant, where there were some seats for customers to wait for the customers seated at the counter to finish their meals. The eye power definitely made one unlikely to linger over his/her meal here 😛 Larger groups would be sent upstairs instead. 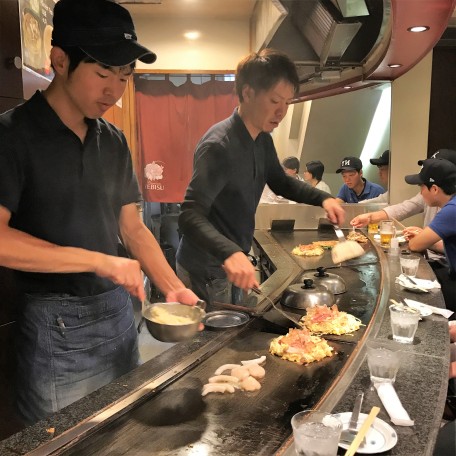 Cooking right in front of us! 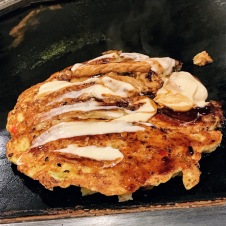 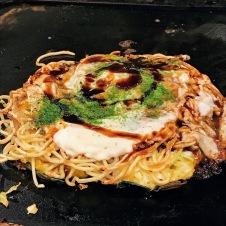 Unlike most Japanese pancake restaurants, where their pancakes are made of flour, Mizuno offers a yam version, 山芋焼 Yamaimoyaki, which had a much softer texture. We highly recommend trying this version! The sweet yam flavour went well with the savoury sauce and pork and vegetables. It also felt lighter and softer than the flour type, but there was still the crunch from the vegetables. We loved it!