Despite the relatively short trip, we managed to cover three night markets in 高雄 Kaohsiung 🙂

Since we were quite near 瑞豐夜市 Ruifeng Night Market, it naturally became our first night market to visit. 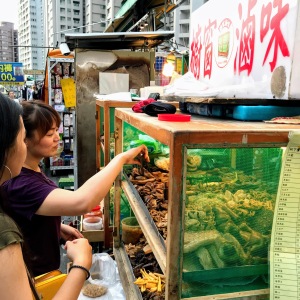 It has been many years since our last visit, and there were some changes to the variety of food available.

We sampled 厨窗卤味 where we ordered a variety of braised vegetables and meat items for NT195. The braised sauce was quite light and the items were not bad. 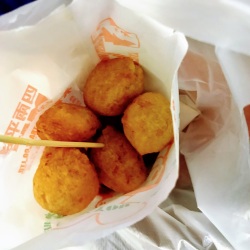 We also tried QQ蛋 Sweet Potato Balls (NT30). Deep fried till crispy on the outside while still soft on the inside, these balls were fragrant and sweet! Ms K also tried 白糖粿 (NT15) which was basically flour and sugar… erm, she said it was ok 😛

What we enjoyed the most was 老江, located a couple of streets away from the night market. Our favourite was 烧肉蛋餅 Egg Crepe with Grilled Pork (NT45). A thin layer of grilled pork and cucumber wrapped in crispy egg crepe, we thought this was delicious enough that we went on to try 肉鬆蛋餅 Egg Crepe with Floss Meat (NT40) and 花生麻薯 Muah Chee with Peanut (NT15). We preferred the grilled pork version due to the texture. Ms K thought the Muah Chee could do with a bit more peanut powder. We also shared the sweet and sour 洛神花茶 Roselle Tea (NT60 for large) and it was so refreshing!

Our final stop after dinner was 漢神巨蛋 Hanshin Arena Shopping Mall, as Ms K had to get a pair of more comfortable shoes. The reason why I’m blogging this is because we were super impressed by the extremely helpful and patient staff who really went the extra mile to find a suitable pair of shoes for Ms K. She was knowledgeable about the different cuts, and could offer appropriate advice. Ms K ended up with something that she really liked plus some comfy socks too!

A night market that is less touristy, there are many eateries and stalls selling mains and less of snacks. Also, cars and motorcycles could zoom by to order take-away, so do be careful!

We managed to try the 雞排 Chicken Cutlet (NT55) from 阿亮香雞排. The salt and pepper batter was yummy, and the meat was not too dry. We also checked out 南豐魯肉飯 Nan Feng Braised Meat Rice eatery and ordered 肉燥飯 Minced Meat Rice (NT30), 魯肉 Braised Meat (NT35 per piece), 油豆腐 Beancurd (NT5 per piece). The braised meat was very tasty! Though quite fatty, it went very well with the rice. The gravy was tasty too! However, we felt that the rice itself was a bit too wet, and the grains were of varying sizes.

Since it was the final night, we decided to check out a second night market 😛 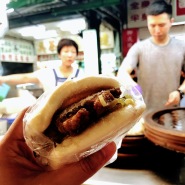 This was a tourist night market, and the roads were blocked off. We bought this ointment cream 一条根 here, which was supposed to be good for rheumatism and minor pains / bruises. Here, we tried 胡椒餅 Pepper Bun (NT40) which was just alright. We preferred 割包 Taiwanese Burger (NT40) here. The vegetables complemented the fatty piece of meat and the bun was quite sweet. We also tried 魚丸湯 Fish Ball Soup (NT35). The fish balls were dense but very QQ, and we could taste the freshness and sweetness of the fish. The shredded lettuce added a refreshing element to the soup. We all agreed that this was a good bowl of fish ball soup 🙂

One thought on “Night markets in 高雄 Kaohsiung, Taiwan”