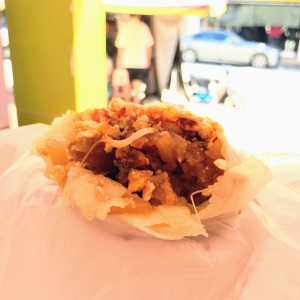 While waiting to check in our hotel, we went to the nearby Bunga Raya Popiah to get ourselves the Popiah that was famous for its generous amount of deep fried crispy pork lard. At RM5 per roll, it was not exactly cheap, but each popiah was quite huge compared to the usual ones. Each bite came with a good mix of lard and jicama (aka Yam Bean or Bang Kuang), however, the other ingredients were barely noticeable.

We felt that the standards had dropped quite a bit, compared to the very first time we tried it many years ago. Oh well, still worth trying if you have never tried it before. Two persons sharing one roll was just nice for us, as it got a bit gelat halfway eating as it was quite oily. But if you enjoy pork lard a lot, you could probably finish the entire roll on your own 🙂