[Here is the photostream of Bhutan 2013 Day 3, for those who prefer pictures to tell a story. 🙂]

Today’s breakfast was served as a set, so we chose to have muesli and scrambled eggs, with toast. Seems like tourists only get continental breakfast! Muesli was deliciously crunchy if you ate it quickly enough, and the scrambled eggs were so much, we wondered if they had given us 4 eggs each… Starting to get overdose of eggs! The toast came wrapped within a paper napkin, very cute, but very hard as usual. 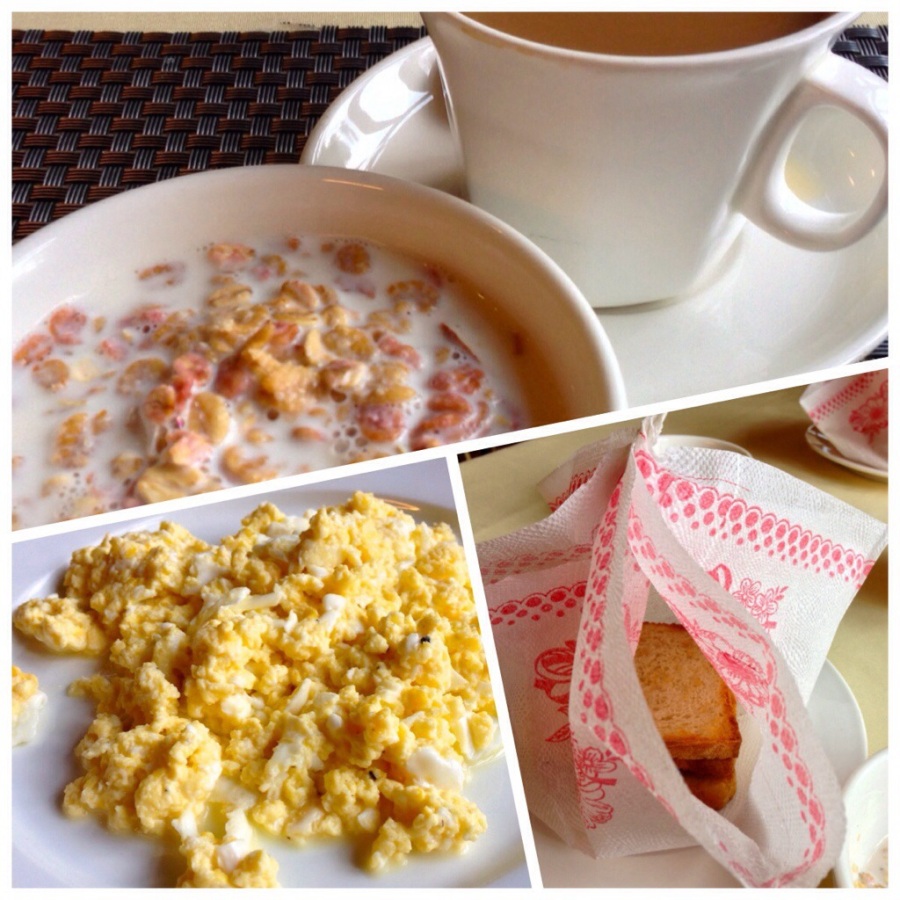 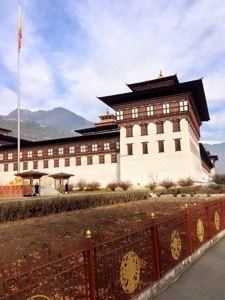 Checking out was a breeze and we hit the road around 8:30. We went to Thimphu Dzong first, since it is open to public from morning (unlike weekdays where public access is from 16:30 to 17:30 only). There were 2 entrances to the Dzong, and the first one was for officials, so we went in via the second entrance, where we had to be screened before entering. The locals had to be in their traditional formal costumes in order to enter the Dzong. The exterior of the temple was surrounded by beautiful prayer wheels, and symbols of longevity and blessings. There were also accommodations for the monks, but the monks only stay here for 6 months in the year when the weather is warm; in winter, they shift to Punakha Dzong, where the temperature was higher. 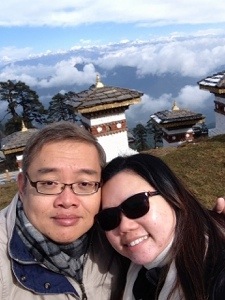 So happy to see the magnificent view!

After that, we made our way to Dochula Pass again, and this time, we were lucky enough to get a clear view of the Himalayan mountain range despite the clouds! Even Dorji said that we were lucky, since usually the clouds would have covered most of the mountains. We also went up to the 108 stupas, which were constructed as a memorial built by the then queen, Her Majesty Ashi Dorji Wangmo Wangchuk, to honor the victory of the Bhutanese army in the 2003 war of Southern Bhutan. The view there was even more beautiful 🙂 It was as though we were standing above the clouds! 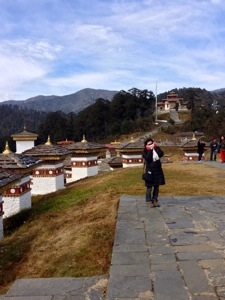 We had tea-break at the Dochula Cafeteria, where Dorji brought us up to the second floor to use the binoculars to get a better view of the mountains. So pretty!! But so cold :p So to warm us up, Dorji got us some soup with cheese to try, delicious! 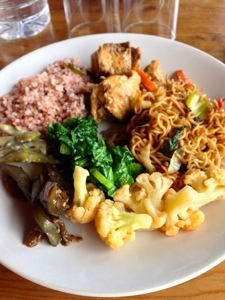 Good lunch to prepare for the hike

After the break, we continued our journey on the road that was really starting to get bumpy… 2 hours of free “massage” later, we finally arrived at our lunch destination – buffet style again, with ice cream for dessert again, which we declined many times. It’s kinda odd to expect us to have ice cream for lunch and dinner everyday, right? I think the toilet was more worthy of mention, coz it was so huge!! Haha!

From here, we hiked through the rice padi fields to visit the temple of the Divine Mad Man, Chimi Lhakhang, aka “No Dog” Temple. Well, no more rice at the moment since rice was harvested by end November, but some of the fields were growing spring onions, broccoli, corn, wheat, etc. We shared with Dorji that we were growing spring onions too, just that we had only ONE onion, and he had a good laugh!

It was a rather easy hike, since it was mostly flat land and the altitude was much lower at around 1300m above sea level, so no more breathless situation today 🙂 We also had a closer look at the traditional houses, and noticed that the roofs were held down by huge slabs of stones. Traditionally, nails were not used, and yes, the roofs do get blown away when the winds are very strong 😮 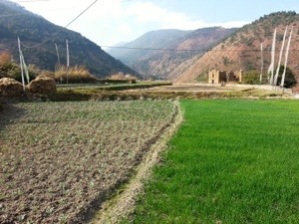 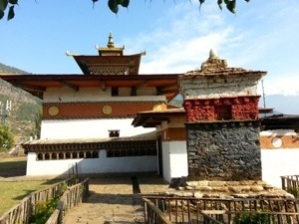 Small temple but full of stories

Dorji took the time to explain the stories found in the wall paintings, which we greatly appreciated. Chimi Lhakhang is dedicated to Lam Drukpa Kuenley, aka the Divine Mad Man, and is very popular with couples who come here to pray for children. If they do have children after the visit, the couple will need to return to the temple with their child to give thanks. Legend had it that because of the unconventional behaviour of the Divine Mad Man, no one was willing to be his student and follow his teachings. He proved that he was a worthy master after he chased and subdued a demoness, who had transformed into the form of a dog, at the site where the temple was situated. He then announced “Chi-mid” (no dog), and that was how the name of the temple came about. 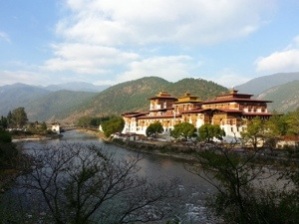 Sitting at the junction of 2 rivers

After that, we proceeded to the beautiful Punakha Dzong, sitting at the junction between the Male River and the Female River, and again, Dorji was patiently explaining all the various stuff to us. On hindsight, it would have probably been better if we had arrived earlier to do some sight-seeing prior to going to the Dochula Festival, then we would have been able to better appreciate the performances 🙂 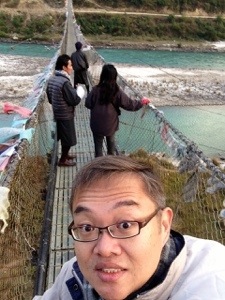 Last place we visited was the suspension bridge nearby, hanging across the Male River, which was bluish in colour as compared to the Female River which had a more greenish tone. We liked the view! It was also super windy, but still much more bearable as compared to the day before. We spotted some young monks playing inside the river (wasn’t it freezing…??) as well as love messages made up of stones laying in the sand. 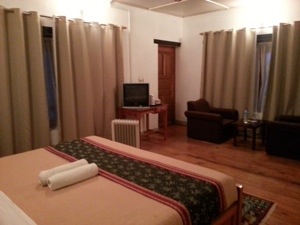 Finally, we reached Meri Puensum Resort Hotel, where we were staying for a night (thankfully). The room was much more basic as compared to our first hotel, but I guess we were somewhat mentally prepared. Well, there was still a small TV, a sitting area and a small electric heater near the bed. It was too cold to use the tiny balcony, so we did not bother.

This hotel did not seem to offer WiFi access in the rooms, so guess what? All the Singaporeans lingered in the dining area to use WiFi after dinner… hahaha! We also had the most interesting time listening to the conversations between 2 Singaporean groups. Call us anti-social… I think we really are. Haha! We had a very weak WiFi signal in our room, but our room pretty close to the dining area… And finally, dessert was no longer ice-cream, but we had bananas instead. 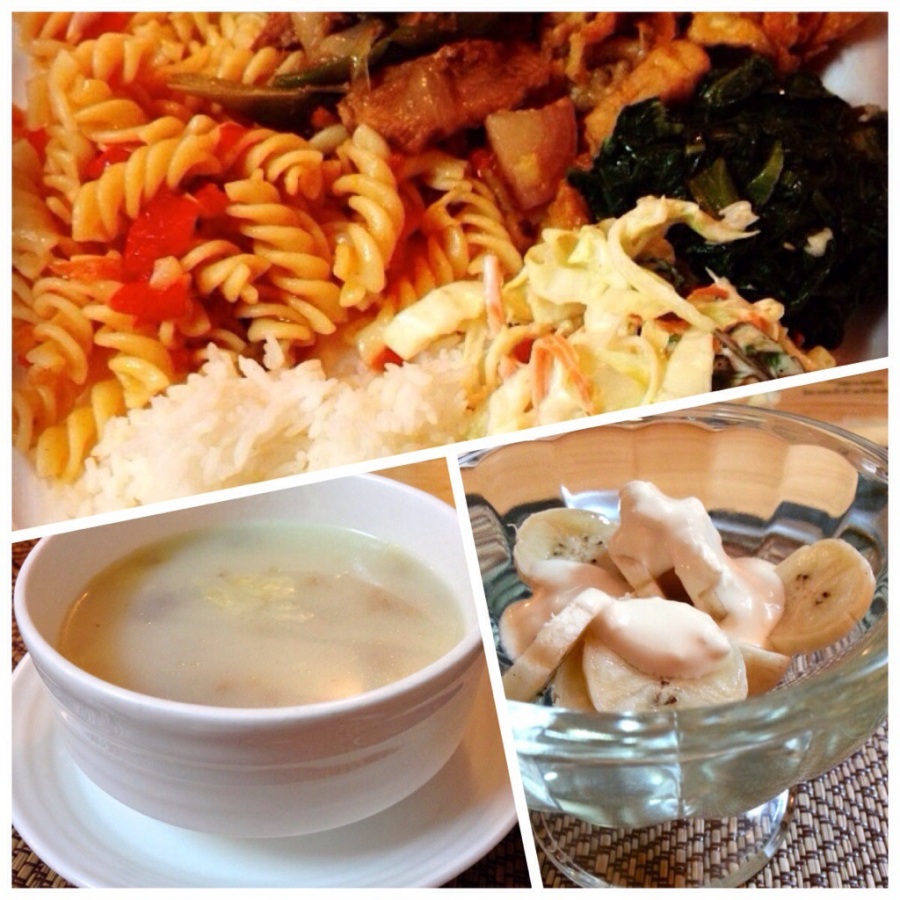 We returned to our room after dinner to freshen up and I was all ready to shower when I realized that the shower was not working properly. Water was trickling out of the shower head, and it was impossible to shower! We tried turning all the various knobs and handles before finally calling for help and the first staff that came was unable to fix the issue and had to call for additional help. Finally, after much fiddling and hitting and what-nots, there was a decent hot water flow. By then, my impression of the place had dipped really low. No water was really below basic service standards, no? And we were really quite tired after an entire day out, and I was freezing while waiting for the shower to work, so I guess I wasn’t in the best of moods. After this experience, for subsequent hotels, we would always get the staff to show us how to use the shower when they first show us to our room.