[Here is the photostream of Bhutan 2013 Day 4, for those who prefer pictures to tell a story. 🙂]

Breakfast was the usual museli and toast, with bananas by the side. We could choose how we wanted our eggs done, and the cheese and mushroom omelette that we ordered was very delicious! We had some time after breakfast, so we went around to take some pictures. There was actually a pretty good view of the valley. 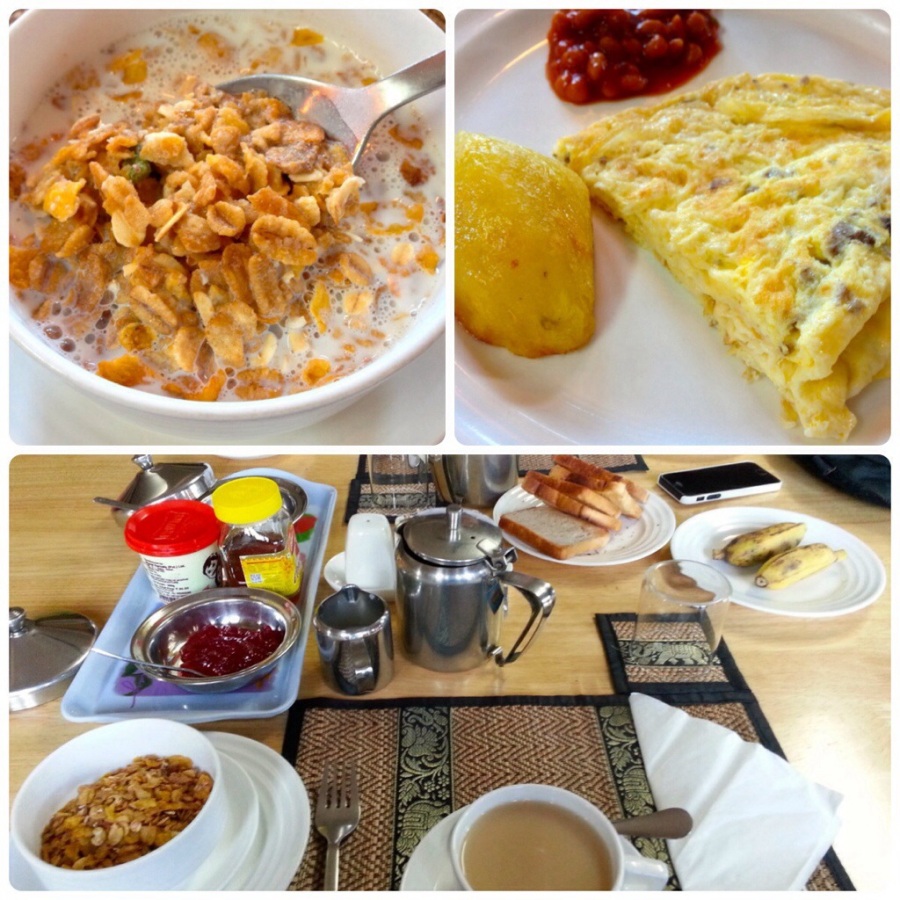 As we left our hotel and went driving into the valley, the sights were so beautiful! It does seem that the views get better as we get further away from the capital 🙂 We passed by a small local market where we stopped to get water supplies, and Dorji pointed out some local vegetables for us to see. It was a short stop for us to stretch and also, we would be visiting a larger weekend market later on, so we didn’t linger here. 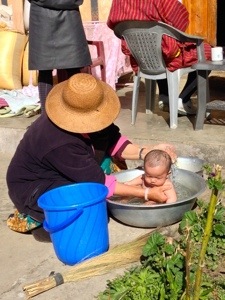 She braved the cold!

At the place where we had tea break, we spotted a blooming carla lily! Reminded us of our trip to Taipei for our pre-wedding photo shoot 🙂 We also saw a brave 3 month-old baby getting a bath outside the restaurant, in the cold! The baby did not make any fuss and just sat quietly throughout the bath, very impressed! 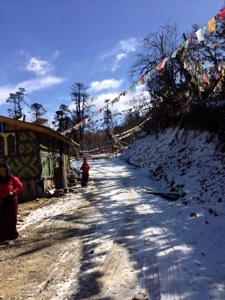 More driving after this, and we had a stop at the highest pass in Bhutan, where snow was all over the ground. I was feeling quite excited at seeing so much snow; hopefully we would get to see falling snow in this trip? Anyway, we continued our long drive and finally reached Hotel Chandbjee for a late lunch. It was deserted :p We had very tough beef! Took us a loooonnnnngggg time to chew. But the potatoes was as good as ever 🙂 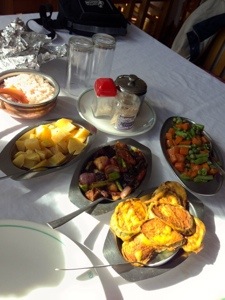 After lunch, we continued our drive to Bumthang, and spotted grey monkeys along the way. Milan tried to tease one with plastic which it thought was food… Heh… the monkey made some hissing sounds 😛 We made a couple of stops before reaching Trongsa Dzong, the longest Dzong in Bhutan, where all kings have to spend a year here before they can become kings. It has as many as 30 temples inside! Most were usually not opened, so we were quite lucky to spot one that was opened. Again, Dorji did a great job explaining the stories of the paintings. There were also quite a few grey monkeys roaming around, and they could be quite aggressive! 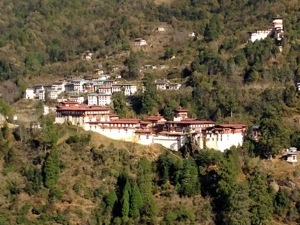 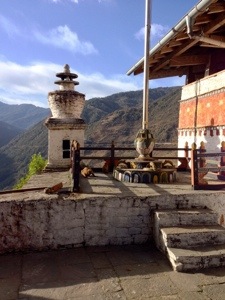 Monkeys roam around freely in the dzong

Trongsa Dzong is the largest in Bhutan

More than 25 temples on these grounds

We spent so much time in the car that our backs and bums were aching by the time we finally arrived at Rinchenling Lodge around 18:15. The sun had set almost an hour ago, so we had been driving in the dark except for headlights. To our surprise, Rinchenling Lodge was dark as well, as though deserted! If there were some eerie background music, this would really look like a scene of a horror show… Dorji even had to get out of the car to open the gates himself.

Finally, the staff appeared! We were quite stunned at the dim candlelight and realised that there was a blackout. We were quite worried as we were supposed to stay here for the next 3 nights… I know I said I was looking forward to no WiFi access for a few days… I didn’t meant that lights and hot water had to go too! *faintz*

Anyway, one of the staff led us to our room using light from her phone, and helped us set up the fire in the fireplace as well as lit up the candles. Everything was so dim and we felt quite at a loss; hubby was upset with the lack of electricity and I was concerned with lack of hot water… and then we accidentally tipped the burning candle onto the timber flooring and gave ourselves a scare… Well, Dorji was just sharing with us that the old town burnt down 4 times due to carelessness with fire and that all the houses were made of timber… I guess we were both very tired and nursing a flu, so were a bit irrational…

With the lights out, we whipped out our phones and used the torchlight app, for which I was now very grateful that I remembered to download this app the night before flying off, and made our way to the dining area. Talked to Dorji and the staff, and it turned out that there was some on-going maintenance in Bumthang today, and the entire Bumthang did not have electricity. So we couldn’t switch hotels anyway, but Dorji was willing to help us switch hotel/change itinerary if the situation were to remain the same the following day. The good news was that the water heater did not run on electricity so we would still be able get our much needed hot shower.

So we requested for extra blankets and water for the night, and Dorji went the extra mile to get us hot water bottle and also hot water for drinking in our room. I think it’s really great having a guide like him, who was very calm throughout and paid attention to details and ensuring that everything was fine for us, to the best of his abilities. Like how he offered to shift our dining table so that we could be nearer to the fireplace, staying with us when we started our dinner, making sure our room requests was carried out and even reminding us to get the staff to show us how to get hot shower.

We had a romantic candlelight dinner (Dorji made it into 2 candles… I think he felt that we couldn’t see our food) with 2 staff waiting on us, and we had the entire dining room to ourselves because we were the only guests for the night. Dinner was actually pretty good, we enjoyed the mixed vegetables (carrots with some melon thingy) very much, and the stir fry beef with ginger was much better than lunch’s. Dessert was oranges, so I think ice cream for dessert must be a Thimphu thing :p 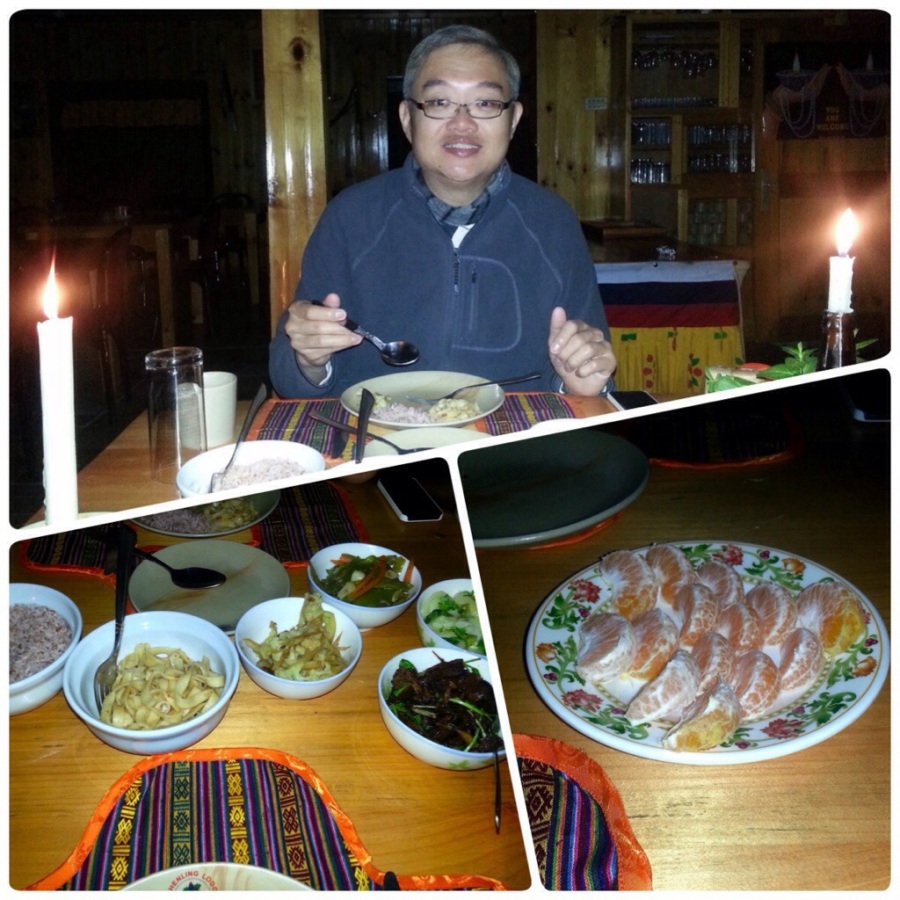 During dinner, we were trying to recount when we last had to use candles for blackout – none for me, and perhaps a couple of times for him during kampong time? I think the last time I ever had to use a match stick was during my JC years where the science laboratories did not provide those gun-shaped fire starters… and it took me a year before I could use the match stick without fear… I guess I lead a very sheltered life hor :p

After that, one of the staff accompanied us back to our room to ensure everything was in order. Halfway, the lights came on!!! We had electricity!!!! Super happy!!!! So we quickly unpacked and washed up, played with the fireplace and had a cozy night 😀 WiFi was weak and practically non-existent, but we didn’t really care at this point :p