[Here is the photostream of Bhutan 2013 Day 8, for those who prefer pictures to tell a story. 🙂]

We had a light breakfast of long beans, baked beans, barley porridge, muesli and delicious made-to-order cheese omelette (skipped the toast and cornflakes).

While waiting for our car to be ready, Dorji and us helped the old lady’s husband to pluck out pine leaves which got stuck all over his fleece jacket. Apparently he went through some bushes to try to get a good picture of the twin rivers surrounding Punakha Dzong and got all these “rewards”…

View of the valley

K5 is to commemorate the coronation of the 5th King 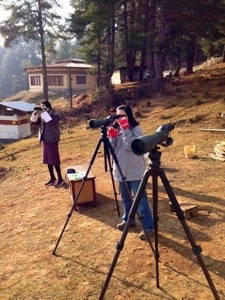 Searching for a crane

After that, it was a long ride all the way to Paro, which started around 08:30. We stopped by the binoculars to check out the black-necked cranes, as they were still quite far to see clearly by the naked eye. Later on, we saw one crane flying right above our car! So excited!! Then we zzz all the way till toilet break at a relatively new restaurant. Woo! The Marie biscuits were nice!

We requested for a later lunch so that we could drive further without break, and we ended with lunch at Dochula Pass again. 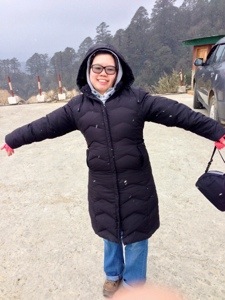 AND IT STARTED SNOWING! WOO HOO!!! Happiness! Happy that we chose not to have an earlier lunch!

It was still snowing by the time we finished lunch, so I still had a chance to enjoy the falling snow.

One of the 108 temples built overnight

After that, we drove straight to the temple in Paro, Kyichu Lhakhang,  one of the 108 temples originally built in the 7th century by the Tibetan Emperor Songsten Gampo which was supposedly built on the left knee of the demon with 108 joints.  The temple was old, but recently renovated, and had this very beautiful metal structure surrounding it.

It was too late for us to visit the Paro Dzong, so we went to check in at Gangtey Palace Hotel instead.

Gangtey Palace Hotel used to be a real palace, and it was a beautiful building! One of the staff showed us to our room, and explained the usage of shower and electric heater, etc.

The best part about Room 101 was that we could see Paro Dzong directly from our windows, and had both day and night view of it. It was very pretty!

Hubby went to toilet, and I proceeded to boil some water and suddenly… we had a black-out! Very lucky of us! I found the candle in the room, but there were no matchsticks, and so off I ran to the reception to get help. Thankfully, our room was very close to the reception area. I had thought that perhaps it was a power trip, but turned out that the entire city was suffering from the black-out, as the staff very helpfully pointed at the rest of the city, and the only place with lights was the palace with its emergency lights. Also, it turned out the the matchsticks were very precious in this place, and the staff had to call someone else to come with matchsticks to our room. I asked them to help me light up the candle, which they did, and they left with the matchsticks! Huh…

Since it was really dim with only a single candle, and there was only an electric heater in the room, which meant that we would soon freeze our butt off, we very calmly made our way to the dining area, where a huge fireplace was waiting for us. Shortly after, the lights came back, went off, came back, went off, and finally came back again. Yes, 3 consecutive black-outs! However, having prior experience with black-outs, we remained very calm this time… hahaha! Gotta say that the staff here were quite pro-active too, by the second black-out, we saw a line of them carrying hot water bags out of the kitchen, to be placed in each of the guest rooms. We spent our time chatting with a driver of another tour group.

Dinner was ala carte, so we ordered cheese momo (dumplings), pork with ginger, pork with rice vermicelli in broth and chicken fried rice. All were delicious! 🙂 We didn’t see Dorji during dinner, which he had earlier explained that they might be staying down in the valley tonight instead. WiFi access was erratic, but probably due to the black-outs, and the staff were also unsure of the password and which network to connect to.

We went back to our room to wash up and prepare to sleep earlier, as we would need sufficient rest to prepare for tomorrow’s hike up to Tiger’s Nest. We dared not wash our hair, despite borrowing the hair dryer from the reception earlier, as we did not know if there would be another black-out. Also, the electric heater was positioned far away from the bed, and did not provide much warmth. It was most useful to dry laundry, but not much else 😦 Fortunately, we could hug the hot water bag to sleep.