Working late today so we ended up at Upper Thomson area again… This time, we decided to try Cafe Etc because of its late closing time! 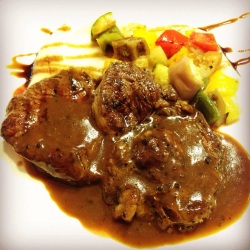 Hubby ordered a Ribeye Steak ($24.50) while I decided on the staff-recommended Drunken Chicken in Red Wine Sauce ($18). Upon seeing the amount of food on the plate, we immediately ordered another plate of Buffalo Wings ($10.50)… Haha!

The Ribeye was quite tender but had at times quite difficult to chew because of the tendons. I found the sauce slightly too salty. 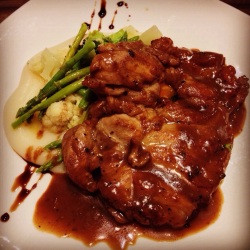 But I spoke too early, because the very tender chicken that I had, had an even saltier sauce! Not too sure if the chicken was drunken, but I was definitely drunk with salt 😮 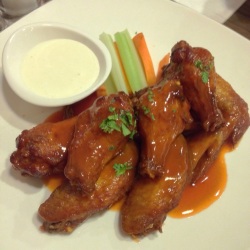 The buffalo wings was salty, tangy and spicy.. Yes, saltiness appeared to be the theme here. Thankfully, the blue cheese helped to make the taste more bearable.

The staff here was quite friendly, but not at all apologetic for the salty food or the cup of water with plastic bits… Not too sure if we want to return back here despite the affordable prices (no GST, only service charge)… But we certainly had enough salt to last the remaining week!