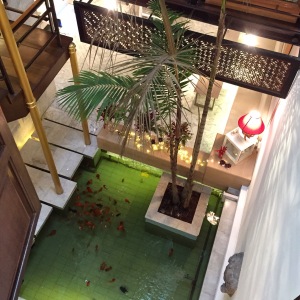 Ms J promised to take us to this secret tea place for a 3-course tea sampling course ($45 nett per pax) and we had been so looking forward to it! We were surprised to be able to find such a peaceful sanctuary right smack in the middle of town 🙂

It was a 5 to 10 minute walk from Somerset MRT, and luckily, J had sent us a picture of the door without signage so that we knew exactly where to look for!

After pressing the bell (actually, we should have pressed the button of the intercom instead), we were welcomed to the lovely tea place!

It was huge with 3 floors and mezzanine floors, with private rooms and common rooms. After removing our shoes, we walked in and were greeted huge goldfishes swimming in the indoor pond!

J had booked the “KTV” room, which could probably seat 9, or have 3 lying down comfortably :p (It was hard not to do that, given the very soft lighting, and cozy atmosphere). The “KTV” is a pure-white room, where we spent the next 3 hours enjoying tea and food and great company at a very leisurely pace 🙂 As it was the Christmas season, the sampling menu had a Christmas theme! The menu changes quite frequently, and includes both seasonal and festive changes. For example, the upcoming menu will be based on Japanese New Year.

First course consisted of the Strawberry Iced Tea with Blueberries, with chips and caramel popcorn as snacks. The salty chips and sweet popcorn were the perfect complement to the light and refreshing tea 🙂 There was a slight twist to the tea, as we got to add rum to it after our initial sips, which enhanced the flavour even more 😀

Second course was Apple Oolong Tea with Plum, German rye bread, and honey baked ham with apple sauce. The apple sauce was really light and yummy, and went well with the ham! The rye bread was dense but not hard. The plum had a coating of sugar, so it was sweet on the outside and slightly sour on the inside. The tea was really fragrant, and we were very impressed that it continued to be flavourful despite replenishing with hot water for several rounds. 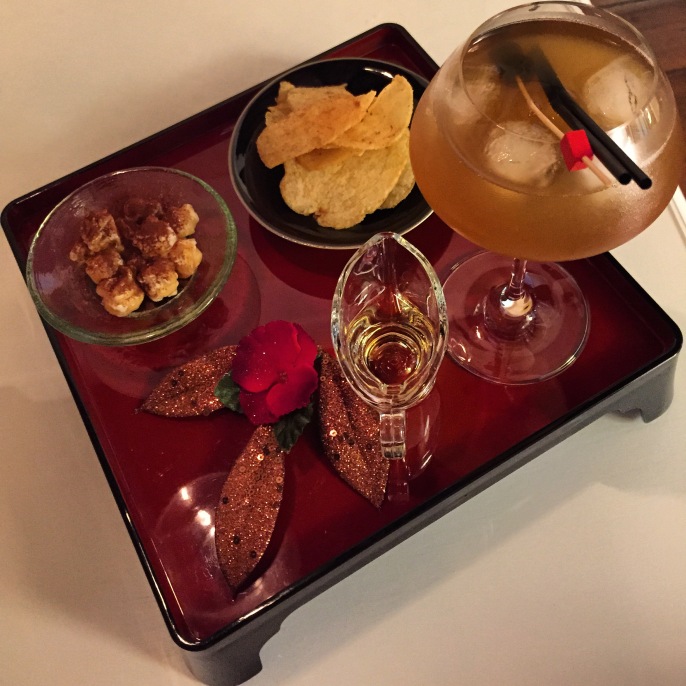 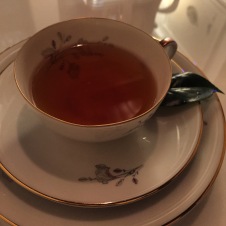 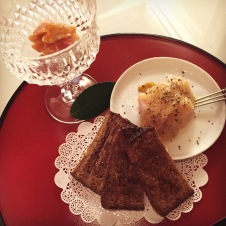 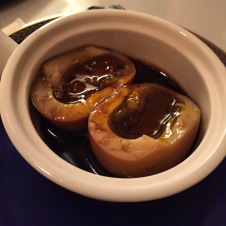 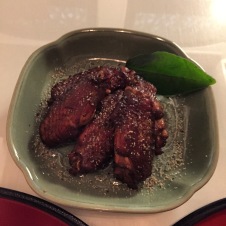 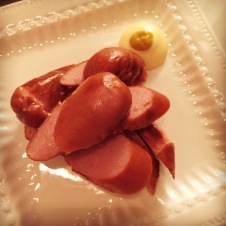 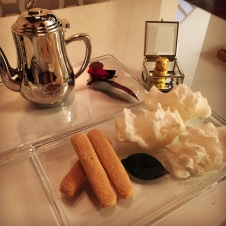 J had pre-ordered some ala-carte and items, so we were in for a treat! First to arrive was their signature Tea-infused Egg which had been soaked in Japanese sake for 3 days. Served warm, we loved the runny, gooey goodness! There was a light alcoholic and tea taste to it, gotta say this was the best 茶叶蛋 that we have ever had 🙂

The Tea-infused Mid-joints, another signature, were coated with salt and black pepper, and was slightly spicy and smokey, best eaten while hot!

The Tea-infused Cucumber Sandwich was yet another signature dish, and it was awesome! With white bread flattened but yet so soft to bite, what made the sandwich so delicious was the fillings that had lots of crunchy stuff, like white sesame, black pepper seeds and seaweed bits, and they were bursting with flavours! Your teeth would sink through the soft white bread and encounter the flavour adventures, and the whole experience was fantastic! Erm, you might want to pay a visit to the restroom at the third floor after that, to rid yourself of the little bits stuck in between your teeth, haha :p

On impulse, we asked if the Tea-infused Sausages were available, and they were!!! Ooh, eaten with wasabi and mayonnaise, it was a great combination 🙂

We used to spend quite a bit of money and time at The Cookie Museum (used to be at The Esplanade), where tea was also going for around $12-15 per pot, with lovely ambience. However, the tea standards dropped so much and the prices kept going up that we eventually stopped going. Hence we have been doing lots of cafe hopping, but there weren’t many options for tea.

We were very pleased to have been introduced to this place! We loved how the 2 staff were very precise in the setting of tea cups and food, and how time seem to remain frozen here. Sure, the service might be a bit slow with only 2 staff manning the entire place, meaning that they have to do the tea and food preparations, run up and down the building and also serve walk-in customers who come to buy tea. But hey, you do need to spend time to enjoy the tea in a quiet and peaceful environment. Thanks J for the wonderful recommendation!