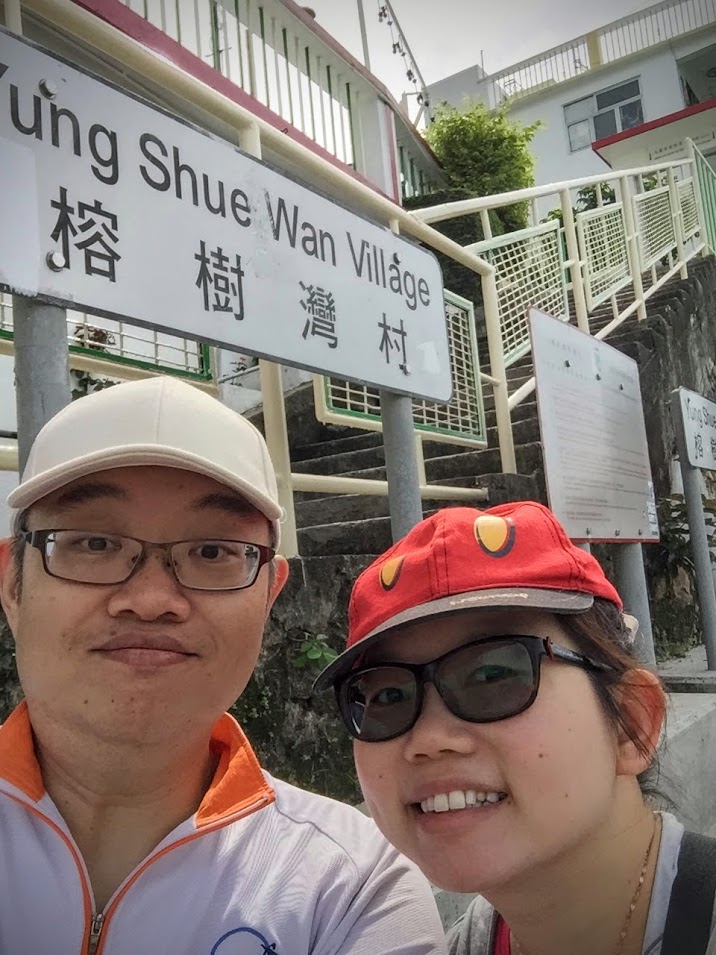 We were going on a hiking trip today at the outlying island Lamma Island 南丫島!

We took the 08:50 ferry from Star Ferry Pier 4 at Central, and it was a quick 25min ferry ride on choppy waters  to Yung Shue Wan 榕樹灣!

Being so early, most of the shops were barely opened at Yung Shue Wan Village 榕樹灣村, but we saw this Sampan Seafood Restaurant filled with people having their morning dim sum. Too bad we had already eaten at Lin Heung earlier 😛

Other than the crowd at the restaurant, the rest of the village was basically a small sleepy town! 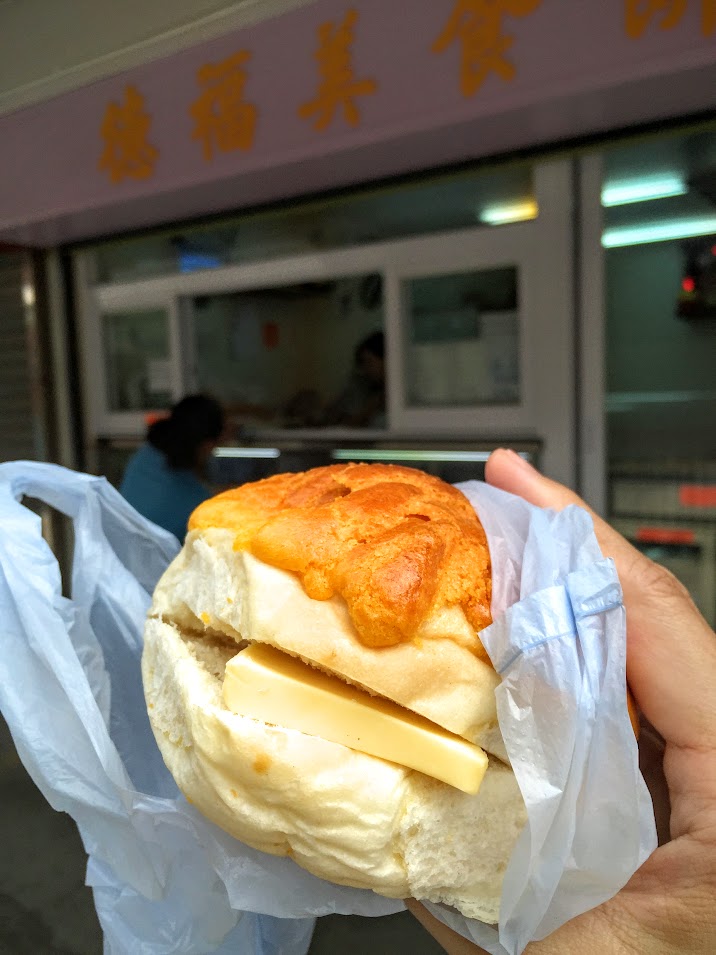 It was just ok

We popped by the 天后古廟 Tin Hau Temple, which was only a short walk from the pier. Moving along the main street, following the signboards that pointed towards Hung Shing Ye Beach 洪聖爺灣沙灘, we discovered 德福美食饼店 and had our first 菠萝油 Polo Bun with Butter (HKD 10). Wasn’t too bad, but it would have been better if the bun was warmer.

As we continued our walk, we soon reached Kin Hing Tofu Dessert 建興亞婆豆腐花, located nearby the road to the Lamma Winds. This was a popular tofu stall which was widely publicized over social media, as evident also from the many magazine cuttings pasted at the stall.

There was no old lady at the stall, but we were served by an uncle instead. We shared a Cold Tofu (HKD 11) and it was dense, but smooth, with a hint of ginger. We were the only ones at the stall, so we hung around a little under the shade, trying to recover from the super hot sun. 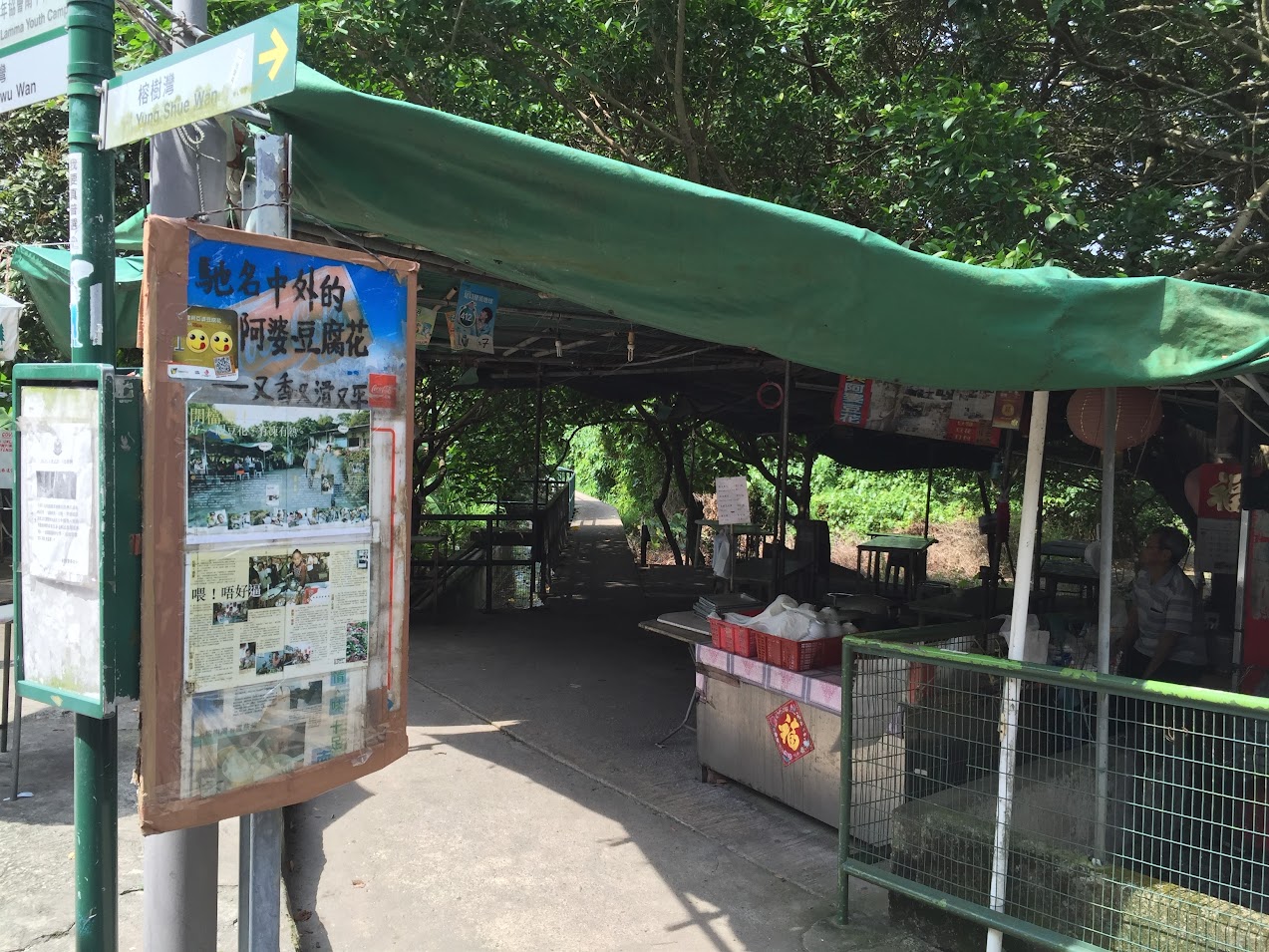 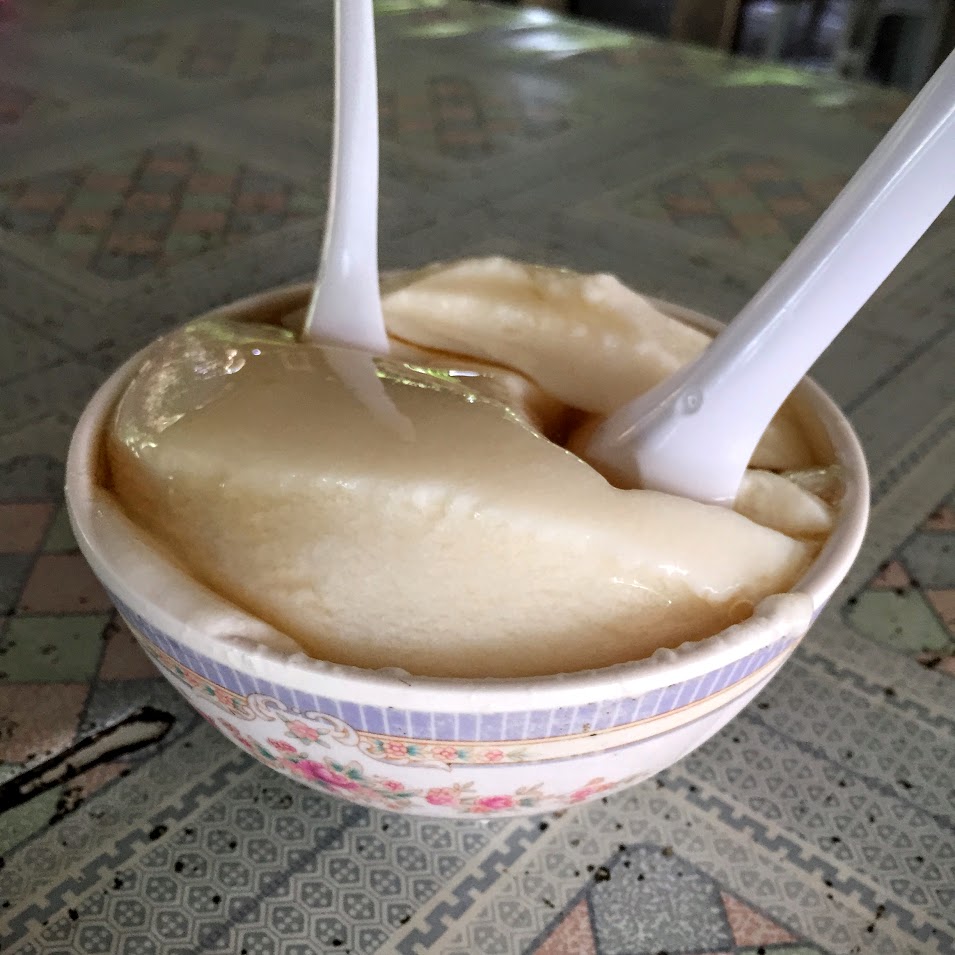 Once we were well-rested, we proceeded to take our little hike up to Lamma Wind Power Station 南丫島風車. The concrete road leading up to the power station was mostly boring, with the occasional excitement because of the sighting of beautiful flowers… and also huge spiders, un-identifiable insects, etc 😮 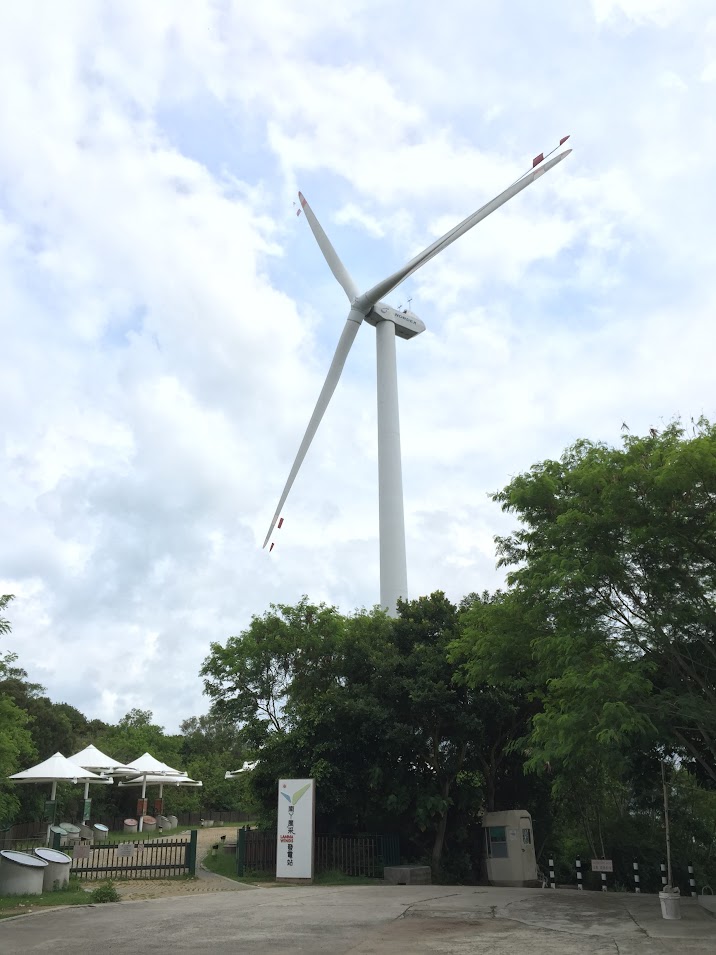 After crawling for almost 30 minutes, we finally saw the gigantic windmill! The windmill was commissioned in February 2006 after nearly 5 years of construction, to supply electricity (capacity of 800kW) generated by wind power, one of the many sources of renewable energy. The height of the tip of the blade is more than twice the height of the Big Buddha on Lantau Island!

It was also super windy here 😀 We took a break at a pavilion view point that was up a flight of steps, and the view was breathtaking!

With the shelter, strong winds, and lovely view, we were glad that we made the climb up. 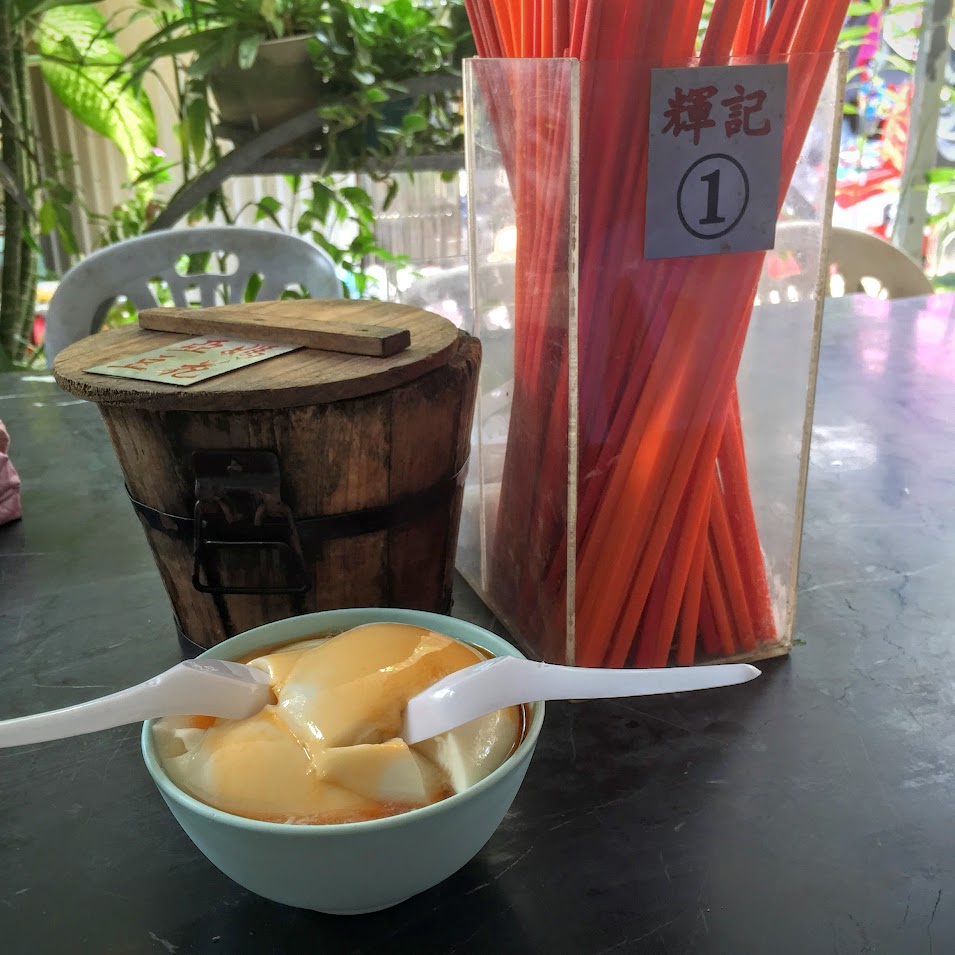 Going back down was definitely much faster, and probably took us less than 10 minutes. We continued to make our way towards Hung Shing Ye Beach 洪聖爺灣沙灘, and right at the entrance of the beach, we discovered Fai Kee Store 輝記士多, where we had our second bowl of Beancurd Tofu (HKD 10). This bowl was definitely much colder than the first one that we had, and it was a great treat for such a hot day! However, this beancurd tofu was also more dense and had a stronger beancurd taste. Word has it that this was also Actor Chow Yun Fat’s 周潤發 recommended tofu stall since he was born and grew up on Lamma Island. 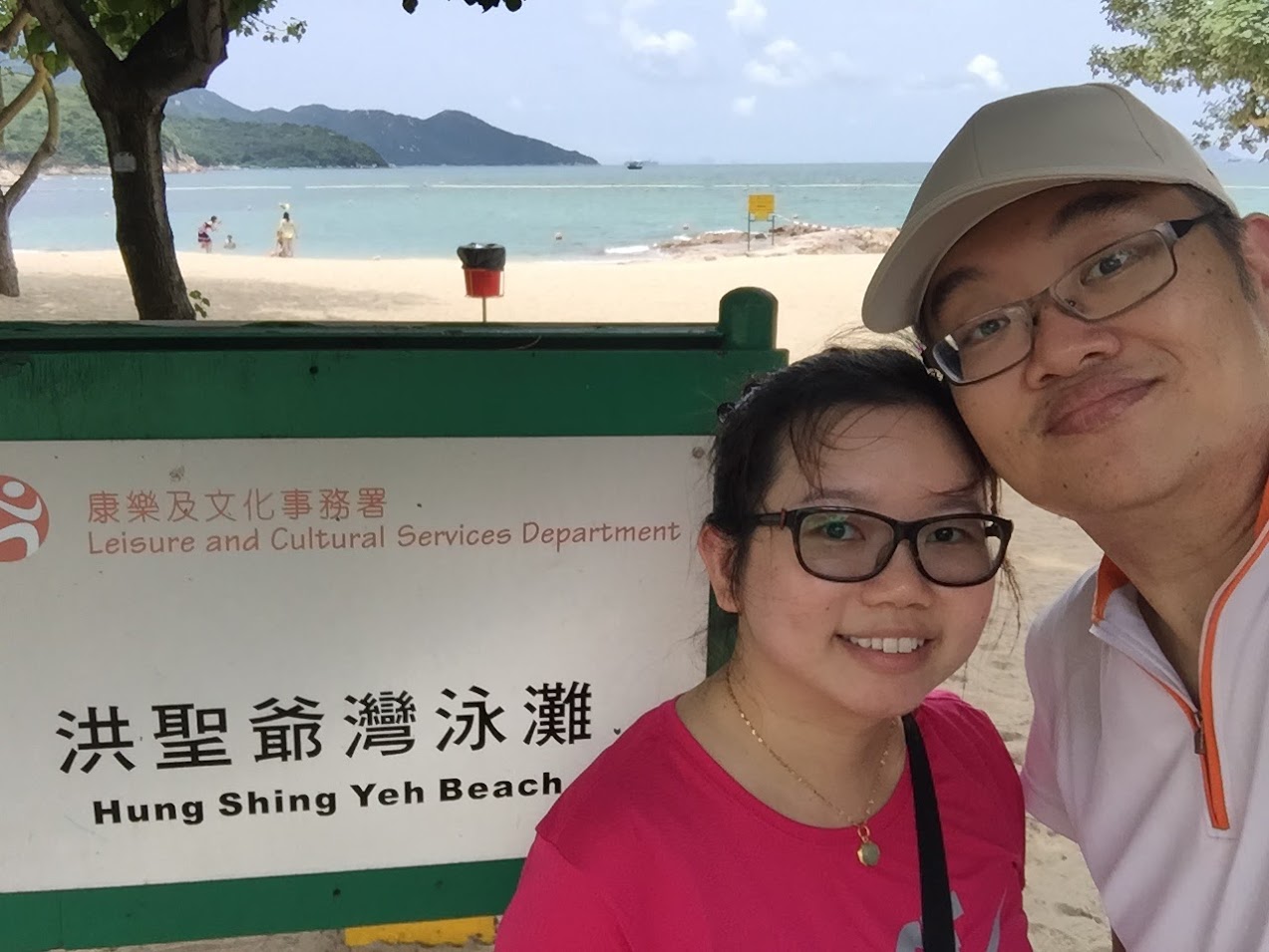 We had read and seen pictures of how clean Hung Shing Ye Beach 洪聖爺灣沙灘 was, and we were sorely disappointed when we saw a lot of rubbish floating in the waters… We definitely would not want to dip our feet in this water 😦 Walking along the beach, we took a toilet break here, as the toilets here were quite clean. It appeared that most, if not all cubicles, were of the squatting type.

Next, we continued with the trail and made our way up the hill. It was mostly all the way uphill, and we had a very good view from the pavilion view point. As we continued on, we passed by a sign pointing towards another pavilion view point 150m ahead via a side stairway leading downwards. It was a total mistake to walk in, because the overgrown foliage had practically covered whatever view that we were supposed to be able to see.. and then we had to climb up the stairs back to the main trail *faintz*

As we continued our walk, we saw a signboard pointing towards Lo So Shing Beach 盧鬚城泳灘… However, as we ventured towards this trail, we were not very sure where it was leading to, or how far away this beach might be. As it was already past noon, and we were running out of water (because we underestimated the heat and did not purchase extra water along the way), we decided to make our way back to the main trail to get to Sok Kwu Wan 索罟湾. Ten minutes later, we almost walked past the Kamikaze Cave 神風洞 without realising, as we were too excited at seeing Sok Kwu Wan village right ahead! 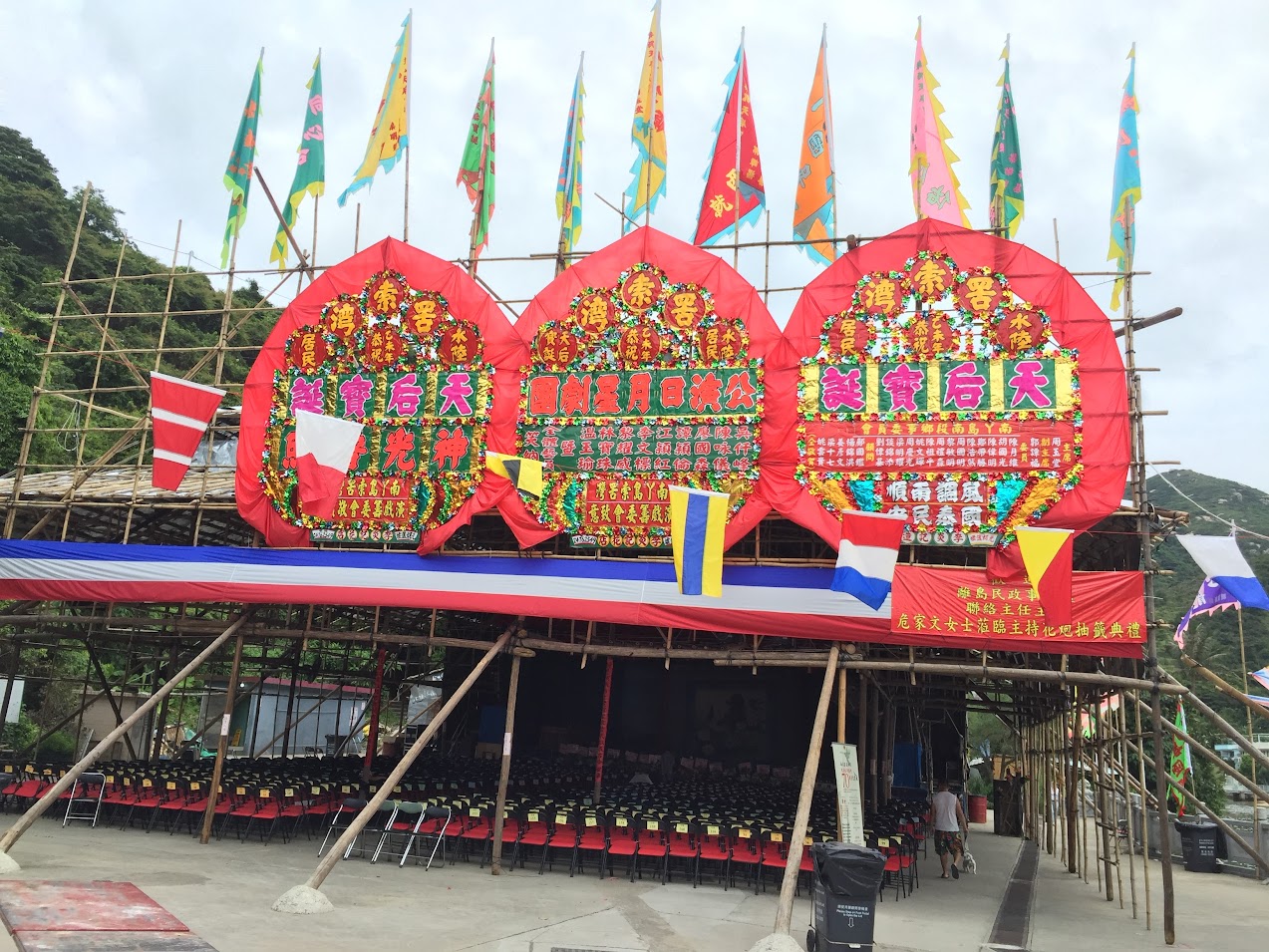 Finally, we reached the Tin Hau Temple 天后古廟 (not to be confused with the one at Yung Shue Wan Village) that marked the entrance to Sok Kwu Wan 索罟灣. A big festival must be upcoming as there was a rather large outdoor stage being set up! Beyond the temple were the stretch of restaurants, where we would finally have our lunch and took the ferry from the nearby pier.

Despite of our crawling speed and many rest stops, we felt rather accomplished that we took about 3 hours to complete the trail. Finally, we have done something other than eating non-stop in Hong Kong 😛 It could get very hot, so do bring lots of water, sunblock, hat and umbrella, if you decide to venture to Lamma Island on a sunny day.