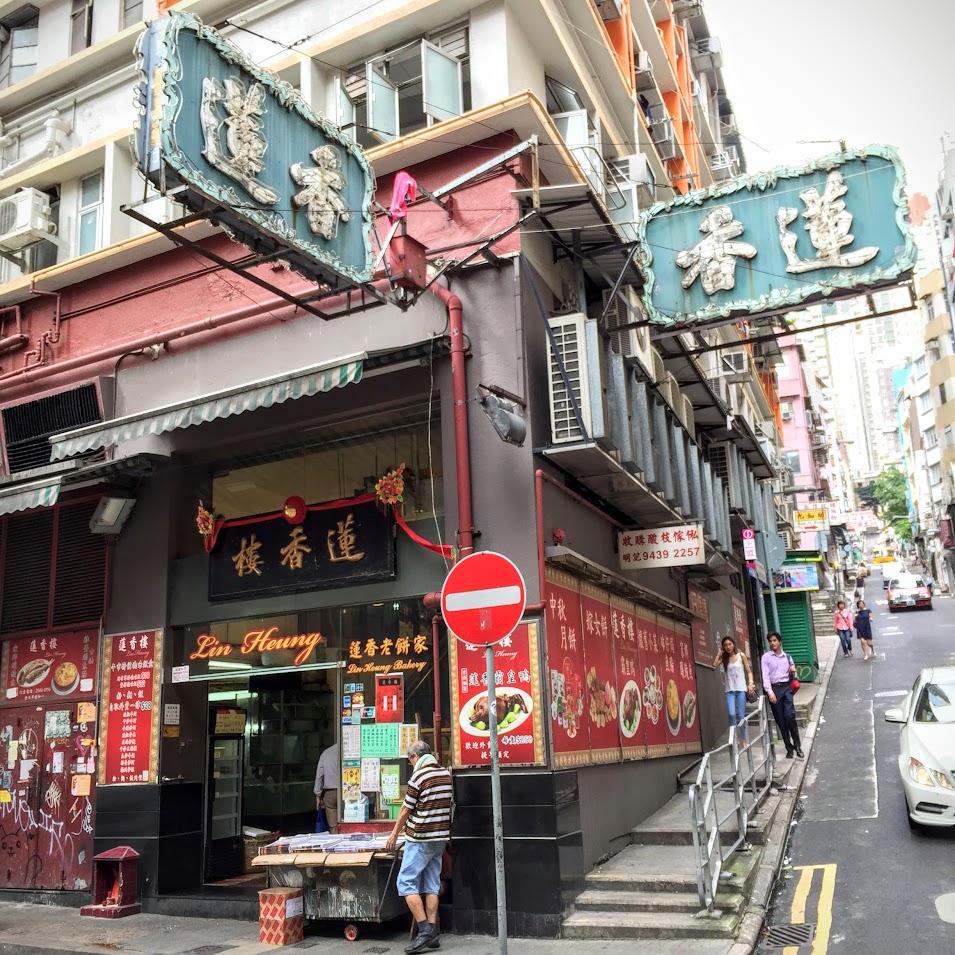 We touched down at 6am, and took no time to breeze through the custom and immigration (since we have no checked-in luggage), bought Octopus Cards, took Airport Express, and changed to MTR! By 7:16am we were already at The Mercer Hong Kong dropping our backpacks as we started off with our first day at the land of dim sums!

Lin Heung Tea House 蓮香樓 is very near the hotel, and we reached at 7:25am but the place was already packed with the morning crowd, especially when it opens it’s doors from 6am everyday!

This old traditional Cantonese tea house (茶樓) which started it’s operations on Hong Kong island from 1918 got its name from the very nice bean paste (蓮蓉) it used in its pastries. The bakery 蓮香老餅家, which is on the first floor of the tea house still sells hot and yummy pastries everyday. The patrons of Lin Heung, mostly locals, are treated to old-school round tables, wooden chairs, thick Chinese tea with real tea leaves, and of course lots of yummy dim sum carts!

Sharing tables (搭檯) here is a must (or should I call a tradition?) to fulling experience Hong Kong Yum Cha (香港飲茶). You get your own seats, cups of Pu Er tea (or maybe its Tie Guangyin) and an order slip to record your orders. The atmosphere here is full of morning, neighbourhood-ly warmness. Everyone seems to know everyone, and it looks like a great gathering place for chit-chats on the latest political, social, international or local gossips that were fished out fresh from the newspapers. It’s not so much the breakfast/food that seems to be of importance here but the camaraderie and the kampung-spirit that brings people back to this tea house over and over again. 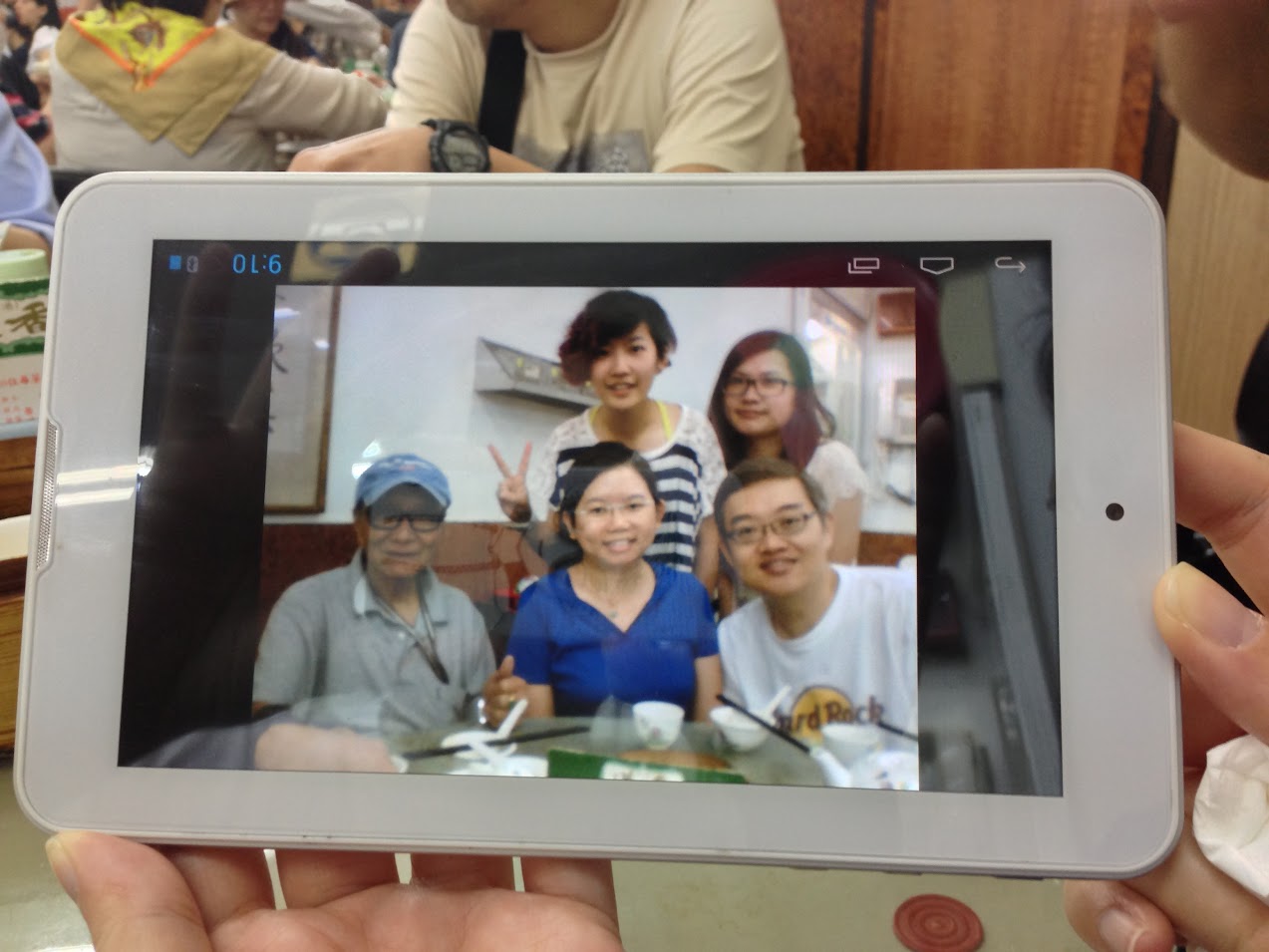 In fact we were super surprised to find an old patron whom we met in our previous trip in Jun 2013 sitting in the same corner of the tea house and chatting with his new-found friends! We still remembered his ‘advice’ when we first visited Lin Heung Tea House, and sat beside him: “Order only one plate at a time and slowly eat, do not order a whole table full and waste the food. When you are done with it, then order another plate”. Truth be told, we have seen patrons who had only one plate of dim sum in front of them and they took their time to savour and soak in the atmosphere. Such is the nostalgic charm of this old tea house. 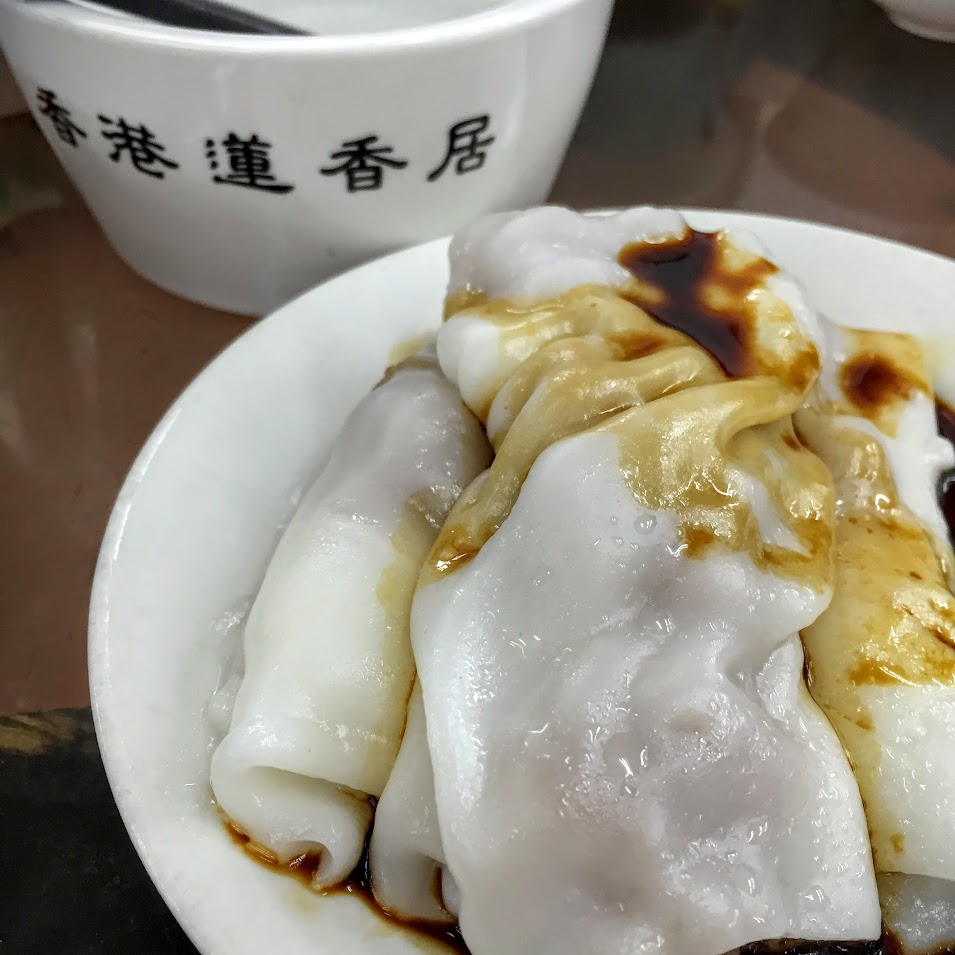 Of course there is the dim sum push carts, which we could only find in Red Star, and in limited portions in Peach Garden, back in Singapore. Dim sum here comes piping hot from the kitchen in push carts with old aunties shouting what’s on the carts. When she arrives at your table, you just need to point to any item you fancy and she will serve it to you, and stamp a chop on your order slip. When a popular item appears, the aunties didn’t had to move very far from the kitchen because patrons will flock to them instead with their order slips!

Since we were rather early in the day (we had planned to take the ferry to Lamma Island), we took our time and ordered plate by plate. First up was 豬潤腸粉 Chee Cheong Fan with Pig’s Liver (HKD18). The skin was a tad thick but the liver was crunchy and flavourful. 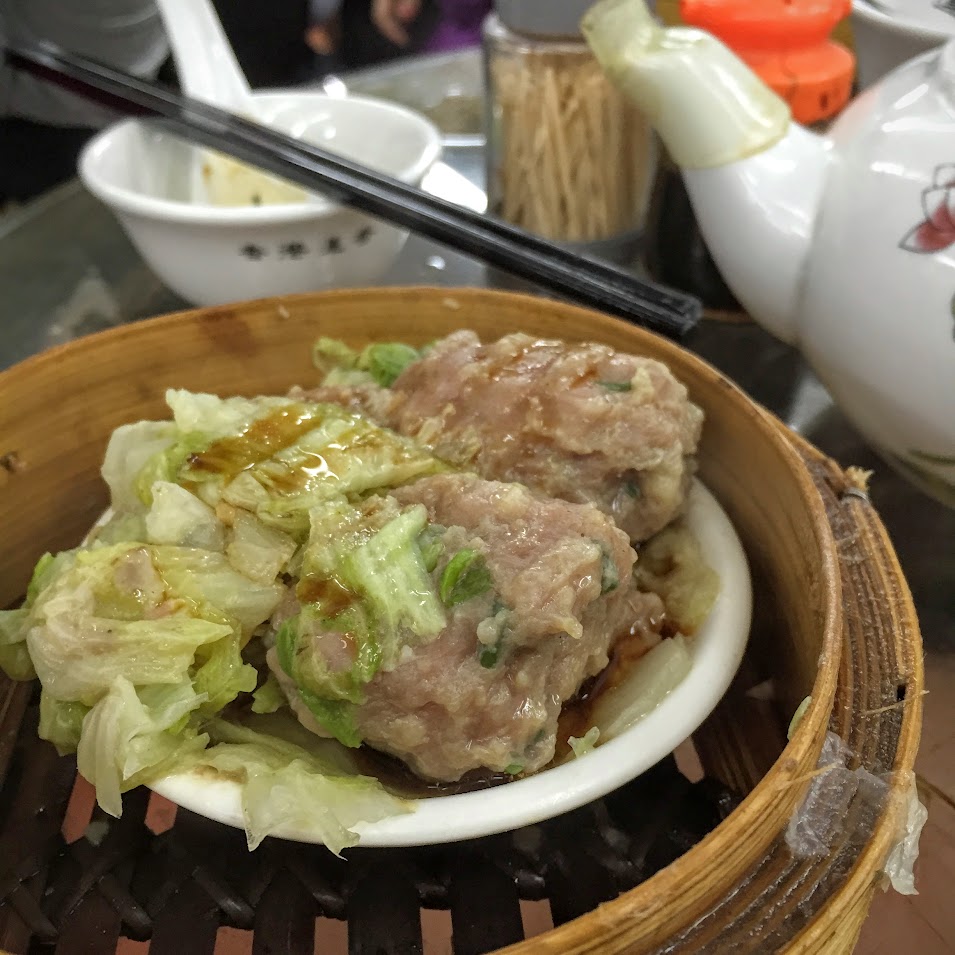 Next we ordered 牛肉丸 Beef Ball (HKD18) and 豬潤燒賣 Pig Liver Siew Mai (HKD18). The beef ball was just normal but the pig liver siew mai had such gigantic pieces of fresh pig livers over the minced meat (which represented the siew mai) which gave us such a ‘shiok’ texture!

We took a break and soaked in the atmosphere while waiting for more special dim sums to come out of the kitchen. And of course, at the same time, people-watching. 🙂

At one time, a cart of rice dumplings came out (because it was near Duanwu Festival 端午節 now) and we were very tempted to try what a rice dumpling or bak chang tasted like in Hong Kong. But we were also weary of the bloated-ness we would get since it would be predominantly glutinous rice (and that we would be on a ferry later). 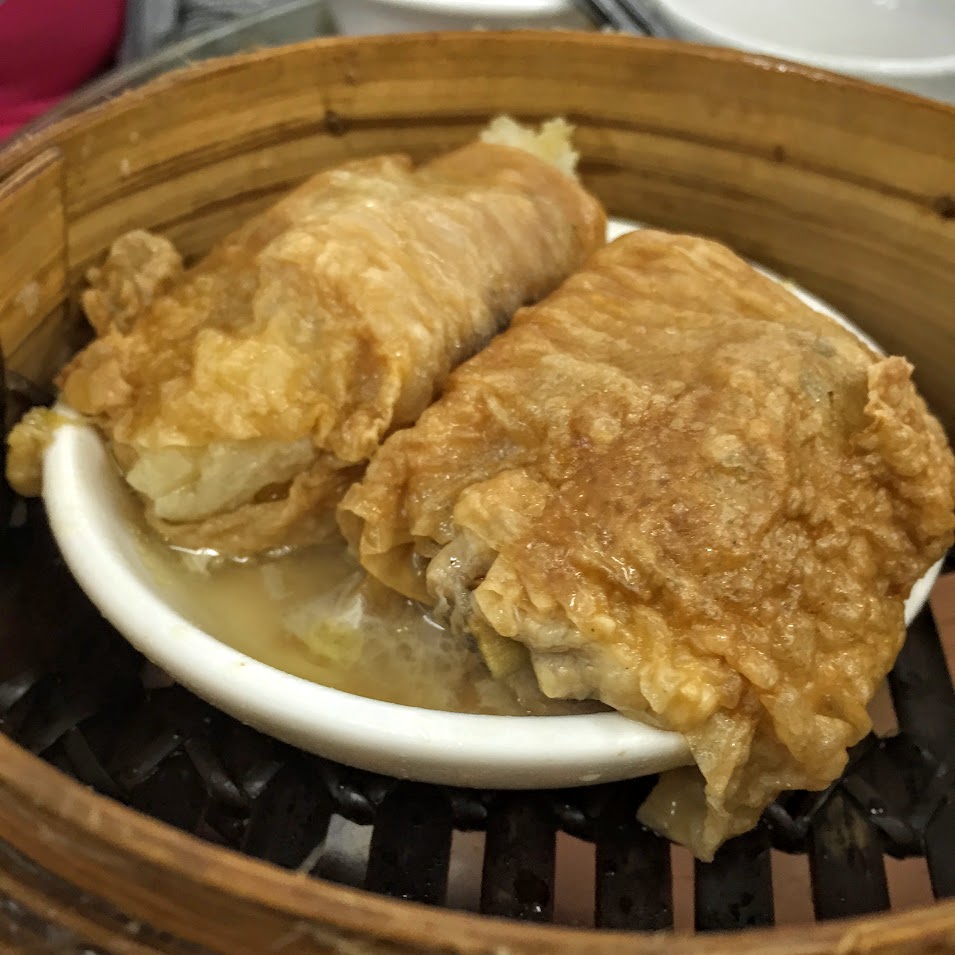 Luckily for us, an uncle sitting on our table ordered one and we got to see what a Hong Kong bak chang looked like on the inside! It was gigantic to start with. And the rice that was used was more pale in colour than what we used to see in Singapore. Possibly because the bak chang was a mix of glutinous rice and baley/corn/yellow bean of some sorts because we saw spots of yellow-ness within the pale dumpling. And the sole ingredient inside was just a salted egg yolk. Thank goodness we didn’t order or there would be two very bloated stomachs!

We finally ended our breakfast with 蠔油鴛鴦扎 Chicken Wrapped with Bamboo Sheet (HKD18). The chicken was very tender and smooth and the broth was very tasty!

There is no service charge here but everyone needs to pay HKD12 for tea. The food was ok for us (there are better dim sums everywhere in Hong Kong) but the nostalgic atmosphere was definitely a plus plus point for us that we don’t mind coming back again and again to just soak in the buzziness, the noise, the whole experience!