After our not-too-satisfying lunch, we went back to Honolulu Cafe, only to discover that not only had the queue not moved much, it had also grew longer! Resigned to our fate, we began our 1-hour queue. Luckily, JY and AN were coming to join us 🙂

AN was late, and somehow, the staff knew what her drink was, and served only 3 drinks, in succession. We noticed that the staff tend to serve one drink at a time, instead of using a tray to carry all the drinks at one go. Not too efficient. 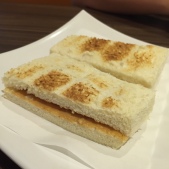 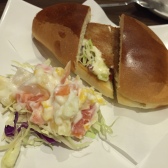 We then twiddled our fingers and chit chatted while we waited and waited and waited for our egg tarts. The polo bun that was not available had become available during our wait. There was some confusion then, as the staff taking orders for another table was still saying that polo buns were sold out, while we watched some being served…

The egg tarts were baked in very small batches! We were also the unfortunate ones who got some from the previous batch, but the staff did not want to serve them to us first, and we only got our egg tarts after the next batch was done. In our mix of freshly baked and less freshly baked, our verdict was that while the egg tarts were not bad, it was really not worth the queue and the wait. It was more crumbly than flakey; the egg custard was quite smooth, but somehow, it was missing the wow factor. Quite unlike the egg tart that we had in Penang.

We did not finish the egg tarts, and JY kindly packed the remaining back to distribute to her friends… Oh, takeaway boxes cost $0.50 each, and could pack up to 6. Some boxes had the Honolulu logo, while others were just plain boxes. They all cost the same though.

Being a fairly new cafe, we guessed the workflow really needed some tweaking. Food running out at 3+ in the afternoon was really not a good sign (we actually didn’t know exactly when it started to run out but we knew that it had ran out at 3pm). Service could be improved. Despite having so many staff, it was difficult to catch their attention.

Our advice? Wait for the hype to die down, then go tabao the egg tarts when there is no queue and enjoy! The rest, can skip… 😛