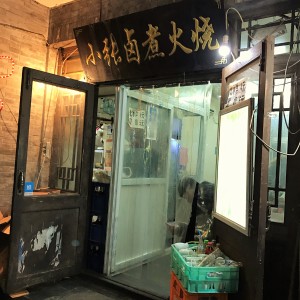 Wanting to have a taste of old Beijing, our lodging for the first 2 nights in Beijing was very near 护国寺小吃街 Huguosi Street, aka Huguosi Hutong Snack Street.

This street was first formed in the Yuan Dynasty and was named after the former 护国寺 Huguosi Temple. It was reopened on 26 October 2011, after undergoing 2 years of renovations. It starts from 新街口南大街 Xinjiekou Nandajie in the west and ends at 德胜门内大街 Deshengmennei Dajie in the east, and forms an intersection in the middle with 棉花胡同 Mianhua Hutong towards the north, and 护仓胡同 Hucang Hutong towards the south. It is a popular street known for its wide variety of snacks.

Though the hotel staff recommended that we should take a proper meal before trying out the snacks (as she was not sure if we would like the flavours) we opted to just snack our night away. Do note that most of the restaurants are not authentic local Beijing food, as we were told that most of them were opened by non-Beijing Chinese. 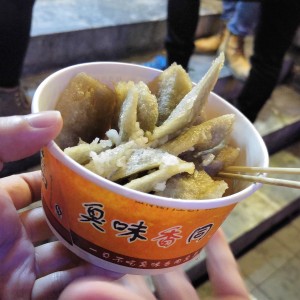 Our first stop of the evening was 长沙臭豆腐 Changsha Chou Dou Fu (北京市西城区护国寺街109号 just opposite 护国寺宾馆 Huguosi Hotel) which is supposed to be famous for smelly beancurd, but we were more interested in this 炸灌肠 Zha Guan Chang (￥5 per portion).

A traditional Beijing local snack, it is pig intestines (or maybe sausage tubings nowadays) stuffed with spiced mung bean flour and then deep fried (with lard in the old times) and served with a garlicky and salty solution (or drenched in it for this version). The skin was crispy and the mung bean inside was quite tender, not bad at all. We did not really have any pork taste though, probably overwhelmed by the garlic dip? This had to be eaten very quickly before the skin turned soggy.

Next was this small little shop, by the corner 小张卤煮火烧 店 Xiao Zhang Lu Zhu Huo Shao Dian (北京市西城区护国寺街115号) that seemed rather popular. By now, we were quite ready for something warm.

We ordered the 卤煮火烧 Lu Zhu Huo Shao (￥22) , which turned out to be something like kway chap using pig offal (intestines, lungs, liver, heart, etc) and beancurd, but more of a stew. The offals were cleaned properly without smell, and we thought that this dish was rather awesome, though a bit salty and some might find the intestines too fatty. 火烧 is some kind of 烧饼 Shao Bing (wheaten cake). I must confessed, I thought it was some kind of mochi when I took the first bite. 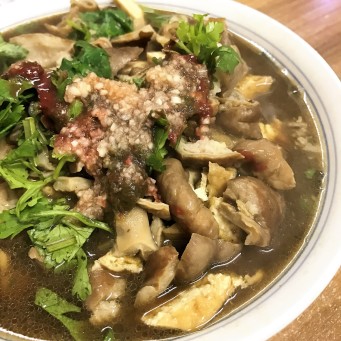 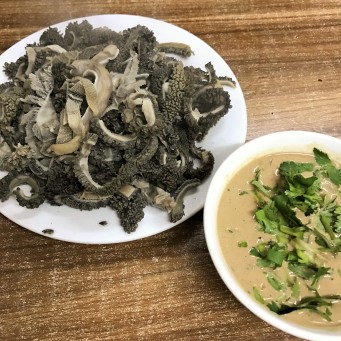 We also tried 爆肚 Bao Du (￥33), which was boiled beef tripe. There are also other versions which use certain parts of lamb intestines. By itself, it was quite bland (which also meant it was very clean), but it tasted quite good with the accompanying sesame sauce with cilantro. There were also small side dishes available for ordering, but we dared not try them, for they were just left in open trays on a side table… 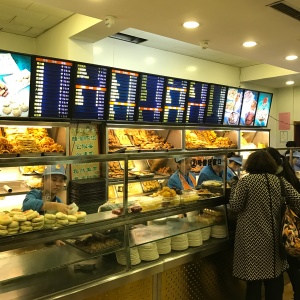 A visit to Huguosi Snack Street would not have been complete without a visit to 护国寺小吃总店 Huguosi Xiao Chi (北京市西城区护国寺街93号), the flagship store of the popular franchise, well-known for serving old Beijing snacks, some of which were Empress Dowager Cixi’s favourites.

There are also seating available upstairs if it gets too crowded on the ground floor. This place also seemed much cleaner compared to the previous shop that we were in. 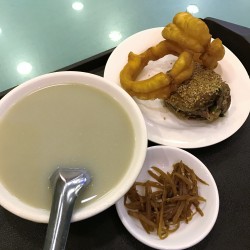 We simply had to try the 焦圈 Jiao Quan (￥1.50 each) with 豆汁 Dou Zhi (￥2). 焦圈 Jiao Quan was deep fried and tasted like a crispier and crunchier version of a doughnut. It would have tasted better if it was warmed. 豆汁 Dou Zhi was definitely not the soybean milk that we were used to in Singapore! It had this sour fermented taste to it, and this is definitely something of an acquired taste. Hubby could not stand it, but I thought it was pretty ok if I eat the 焦圈 after dipping in it, or eating it with the side pickled vegetables.

We also tried the 烧饼夹肉 Shao Bing Jia Rou (￥7), which was a baked sesame flatbread with pulled pork. This was actually not bad, but a pity it was cold, so the bread was a tad too hard. 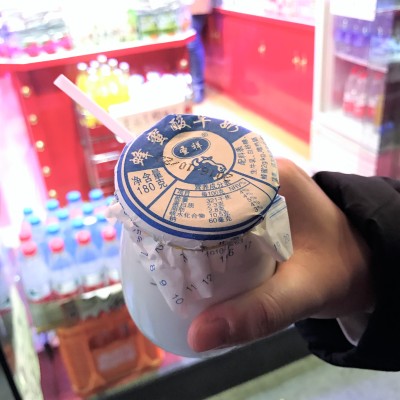 By now, we were really too stuffed to try anything else, but I wanted to make a special mention of this yogurt drink…

We first saw these little ceramic jars of 老北京酸奶 Lao Beijing Suan Nai Yogurt drink in 护国寺小吃街 Huguosi Street, but were simply too full to try it. However, after tasting it on the second night, I had this super delicious, refreshing, lightly sweet and sour treat every single night for the rest of the trip, haha!

You have to drink it on the spot and return the ceramic containers to the shop for re-use. We usually pay ￥5 for one but have seen prices go up to ￥10 at some places of interest. We did chance upon a convenience store that would charge a deposit of ￥1 if you want to take the ceramic container and get a refund when you return it back to the store.

It was ￥4 here, and we chose to buy the plastic container version to bring back to the hotel, but the ceramic version was definitely better. Apparently, there are only 2 companies remaining who still do the ceramic versions. The ones that we bought says “蜂蜜酸牛奶” (honey yogurt), and the ingredient lists indicated that both sugar and honey were used.