We had wanted to visit Tai O 大澳 for the longest time, but somehow we never made it in our past trips. This time, we made a special effort to visit!

After dropping our bags at the Regal Airport Hotel, we took its complimentary bus shuttle to 東薈城 Tung Chung Citygate, made our way past the queue for 昂坪纜車 Ngong Ping Cable Car (which will be closed for approximately 5 months from Jan 2017), before finding the other bus terminal for 新大嶼山巴士 New Lantao Bus (Tung Chung -> Tai-O, Tai-O -> Tung Chung).

The bus frequency was roughly every 15 minutes, and the queue for Bus No. 11 was rather long at noon time. Note that depending on the type of bus, not all had standing space. Hubby was the last who got up the bus but there were no longer any seats available, and he had to explain to the next bus driver that he had already tapped his Octopus card in the previous bus. Thankfully, he did not have to pay twice. We dozed off almost immediately and 55 minutes later, we reached the Tai O terminus! 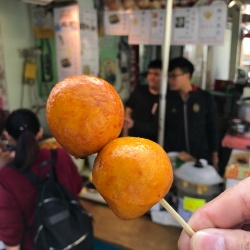 Upon entering the village, our first stop was 復興行 Fuk Hing Hong, because we were attracted by the 巨大咖哩魚蛋 Jumbo Curry Fishball (HK$14 per skewer of 2). It was very QQ and yummy!

Just next to it was the 大澳鄉事委員會歷史文化室 Tai O Rural Committee Historical and Cultural Showroom, a small museum which was worth a visit, to get a glimpse of life back in the olden days.

It was a really hot afternoon and since it was getting quite late, we opted for lunch at 大澳蓮香酒家 after overhearing from some other visitors that it was quite a good option for lunch.

We had 蝦酱油麦 Lettuce with Shrimp Paste (HK$55 + 10% service charge), as we were told that kangkong on the menu was only available during summer, and there was you mai today. This dish was quite fragrant because of the shrimp paste. 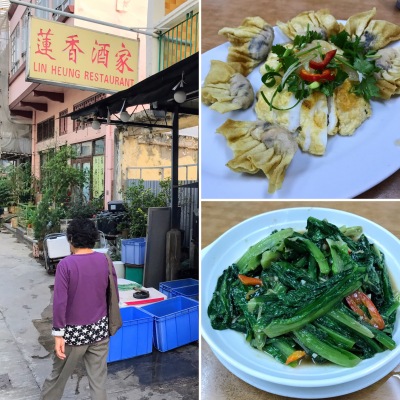 We also ordered the signature 水餃海蜇墨魚餅 Wanton, Jellyfish and Cuttlefish Platter (HK$78+ for small), and this dish was really quite awesome! The wantons were deep-fried till crispy, and the cuttlefish was tender and addictive. The jellyfish provided a refreshing feel to the deep-fried dish. Rice was available at HK$10+ per bowl, and tea was charged at HK$6+ per person.

We did not order too much for lunch, because we wanted to try out all the various street snacks 😛

First on our list was the famous 大澳炭燒雞蛋仔叔叔. Armed with his sunglasses, Uncle Egg Waffles expertly chargrilled his Egg Waffles one by one with his single waffle iron over the charcoal pit. At HK$15 per piece, this was the best egg waffle we ever had. It was crispy on the outside, and super soft and fluffy inside, and had a very lovely egg aroma. It was so good, we finished the entire thing while it was still hot! 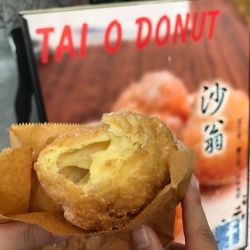 Diagonally opposite the egg waffles shop was 大澳餅店 Tai O Bakery. We could not resist getting the freshly deep-fried 沙翁 Hong Kong Style Doughnut (we waited for a fresh batch).

We preferred this to the usual doughnut though, for it has this lovely egg aroma. This 沙翁 was so fluffy inside! This is something that is best eaten freshly made, before it turned cold.

After so much food, we spent some time roaming around, and taking pictures of the famous stilt houses and drawbridge.

After that, we headed to 車站豆腐花 for a quick break of 冷豆腐花 Chilled Beancurd Jelly (HK$12), and a 热豆腐花芝麻糊 Hot Beancurd Jelly Mixed with Sesame Paste (HK$15). Both were silky smooth and delicious! 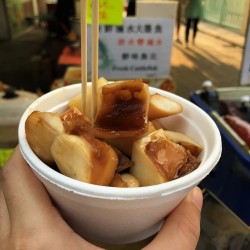 On our way back to catch the bus, we passed by 復興行 Fuk Hing Hong again, and this time, we could not resist getting the 鹵水大墨魚 Braised Cuttlefish (HK$45 for small portion). It was awesomely tender and flavourful!

Cravings satisfied, we slept through the journey back to Tung Chung, where we did some shopping (i.e. hubby let me sweep lots of 大排档 Dai Pai Dong 2-in-1 milk tea) and packed sashimi, sushi, and roasts from the supermarket back to hotel for dinner.

What a great way to end our trip 🙂