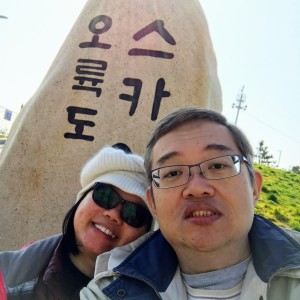 As usual, prior to the trip, we sought advice from the hotel staff, and decided that it would be much more convenient and not that expensive for 4 of us to share a cab after taking the subway to 경성대부경대 Kyungsung University–Pukyong National University Station 慶星大·釜慶大站 (Subway Line 2, Station Number 212). We boarded cab at 8:49am just outside Exit 5, and arrived at the Sky Walk 14 minutes later (₩6,700).

Being early, we had the Skywalk almost to ourselves, and took our time to enjoy the beautiful scenery. We also spotted tents where 海女 would normally be selling the seafood that they obtained on their trip out in the sea, but we were either too early, or it was their off day today, for the tents were all closed.

Walking out into the sea

Up above the sea 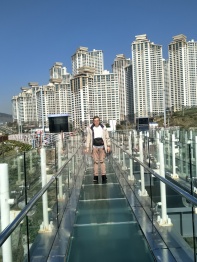 Kind of scary to walk on glass 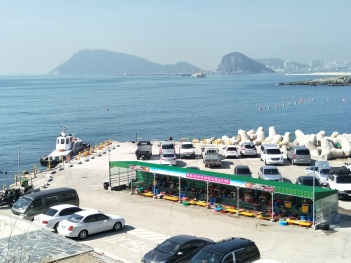 Too early for business

We decided that it might be worthwhile to do a little trekking towards 이기대 Igidae 二妓臺. The hotel staff advised that it would likely take 30 minutes, so we figured that it would take us an hour or so, based on our fitness level and buffering some time for photo-taking. Strangely, the signboard indicated that the hiking trails would take a few hours, but we assumed that we would be able to get out of the trail midway. 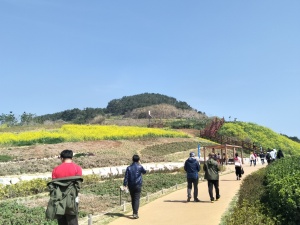 We started hiking around 10:45am, and the initial hike was a bit tough, because the trail were quite uneven with lots of stones, and sometimes without railings. There was also not much scenery till we were more than 45 minutes into the hike, and it slowly became more and more scenic. We also noticed locals fishing and/or having picnics, and even saw the 해녀 (Haenyeo) Female Divers 海女 in action, swimming in the sea with their buoys!

As we walked and walked, it suddenly dawned on us that we were definitely not able to get out of the coastal walk anytime soon… Big oops! We were definitely not prepared for a long hike without proper attire, or sufficient food and water. However, it was too late to turn back, and we soldiered on. Luckily, there were beautiful views of the sea to keep us motivated. 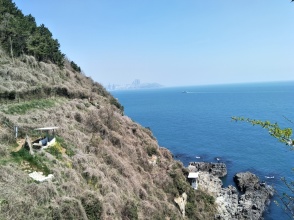 A toilet out of nowhere… 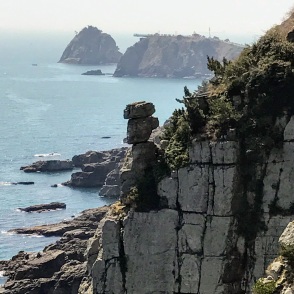 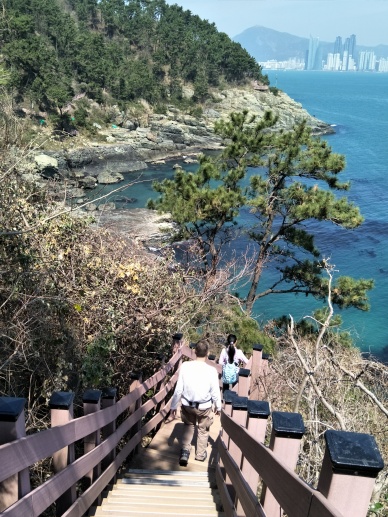 There were footpaths along the way 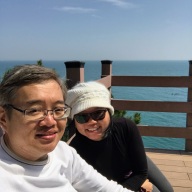 Close to 4 hours into the coastal walk, we tried to walk out to the main road, but could not see any cabs, or bus stops. Finally, we decided to turn in and continue, and we got lucky, discovering a run-down convenience store! Through much gesturing and broken English, we figured that it would take us another 30 minutes or so to reach a place with cabs. That was not too bad, for now we had a place to rest and have some food.

We all opted for instant noodles, haha! I gotta say, the instant noodles tasted really good when one was hungry, tired, and accompanied by lovely sea view and light breeze. We also spotted a few locals who were hiking in reverse direction, and were enjoying ice cream cones bought from the convenience store.

Once we had rested enough, we went to check out the map and tried to work out the directions… That was when we met a really kind ranger!

She asked if we needed help with directions in Korean, and when we tried to explain that we were trying to find our way out and wanted to get a cab, she sounded very apologetic that she did not speak much English.. But suddenly we discovered that we all knew some bits of Japanese, and were able to communicate!!! She understood what we needed, and volunteered to walk with us. 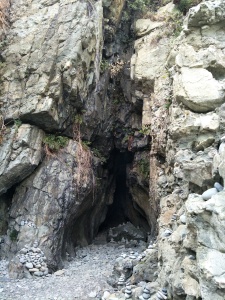 First, she brought us to a hidden hideout nearby to show us, and we had some fun taking pictures together. Next, she begun to lead us to the exit, and wow, we were most impressed by her speed and ease of walking. We were practically breathless trying to catch up. Small wonder the locals all looked like they were having a fun and leisurely hike; are Koreans all so fit??

Almost 30 minutes later, we reached the end of the trail, but there were no cabs to be seen. She suggested that we could either take a cab, or there was a direct bus back to our hotel. We opted for the bus, and she walked us to the bus stop, which was 20 minutes away. We were really touched by her actions, for she could have easily just given us directions instead of walking with us all the way. What a kind lady!

We finally got up Bus No. 24 around 3:45pm, that took us back to 서면 Seomyeon 西面. What an unexpected 5-hour hike!

Once we got off the bus, we rewarded ourselves with our favourite fishcake, before splitting up for coffee and some rest in the room (hubby and I were totally shacked and dehydrated), while Ms. V and Ms. W went on to enjoy waffles at Cafe 7gram.

Looking back, we really enjoyed the walk and the beautiful coastal scenery, but a gentle reminder to all that you do need to prepare enough water and pack some snacks for the trip 🙂