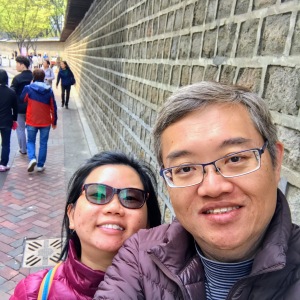 Our last day in Seoul, and we thought to just hang around near our hotel.

We wanted to check out the stone-wall road of 덕수궁 Deoksugung Palace 德壽宮, but as we were walking towards the palace, we heard drums going off…

Imagine our excitement when we saw the Changing of the Royal Guards Ceremony in front of 대한문 Daehanmun Gate 大漢門 so close to the streets (and traffic lights)!

Too bad it was nearing the end already, so we decided to go ahead with admiring the stone walls, and finding a cafe to chill, while we waited for the 15:30 Changing of the Royal Guards Ceremony to begin.

We were pleasantly surprised by the waffles here, which was soft with walnuts hidden inside 😀 Very fragrant and delicious 🙂

The coffee was not bad, and the sweet potato latte was not overly sweet (sweetness could not be adjusted, as they used a pre-mixed powder for this drink). The seats here were quite comfortable, and we had a relaxing time here 🙂

We returned back to 대한문 Daehanmun Gate 大漢門 around 15:20, as we wanted a good spot to take pictures, and the gate was very close to the roads, so there was much lesser space to stand around to watch the ceremony. 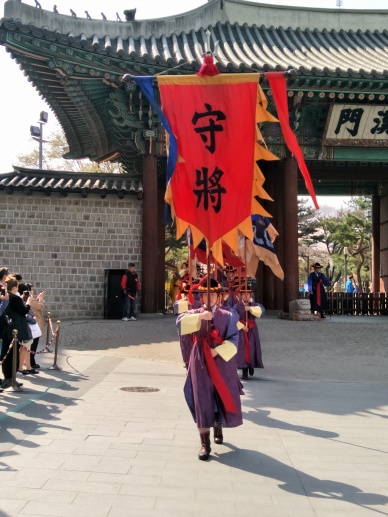 The 15:30 Changing of the Royal Guards Ceremony allowed visitors to take pictures with the guards at selected times during the ceremony (not too sure about the earlier ones at 11:00 and 14:00). With a smaller crowd compared to 경복궁 Gyeongbokgung Palace 景福宮, and the guards were literally next to us, it was definitely much more up close and personal! We really enjoyed ourselves 🙂

We had some time left before going for dinner and then head for the airport, so it was a search for more coffee nearby.

We got ourselves a 플랫화이트 Flat White (₩4,600) at Cafe Droptop, which was a first, since everywhere else appeared to sell only Cafe Latte.

Quite a decent cup of coffee, and definitely a nice place to chill 🙂