It was already past 8.30pm by the time we were done with checking into 如家精选酒店 (杭州西湖吴山广场河坊街店) Home Inn Plus (Hangzhou West Lake Wushan Plaza Hefang Street) and freshening up, so we decided to just grab something nearby.

老杭州家常菜 was still opened, so we decided our first proper meal here would be some local delights, including 东坡肉 Braised Pork Belly (¥14) (very tough!) and 西湖醋鱼 West Lake Fish in Vinegar Gravy (¥58). We also ordered 炒油麦 Stir-fried Lettuce (¥18) to balance the meal.

We thought the fish was quite fresh. It was easy to eat as there were little bones. The vegetable was pretty standard. Unfortunately, the braised pork belly was very tough, and we hoped this was just a poor rendition of the very famous dish 😮

After which, we just strolled around 河坊街 Hefang Street (aka Snack Street) and the street parallel to it. That was when we realised there were quite a few 老杭州家常菜… Not sure if they belong to the same chain?

Note: There was a ¥1 charge for cutlery.

Posted on 4 September 2018 by lendeliz 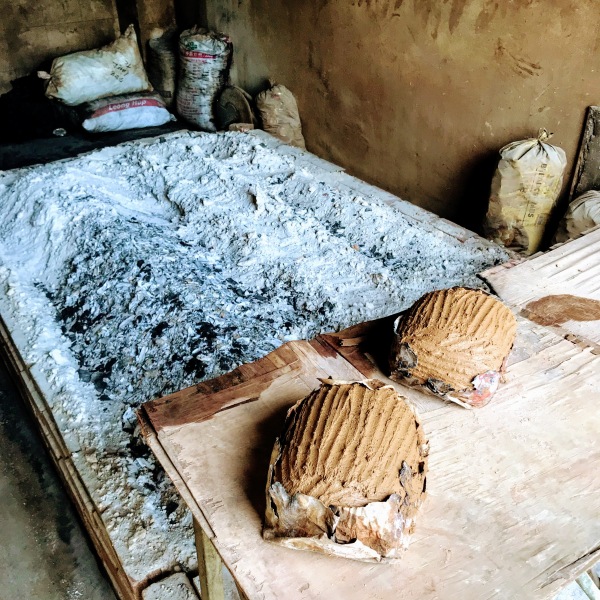 We had wanted to check out this place for the last few trips but it was always closed (because we kept picking the same day to travel 😡). This time, we especially picked a different day, and called in advance to make reservations.

We found the place slightly before 12 noon, and found the metal gates still locked 😮 However, looking through the gates, it seemed that the back door was open, and we figured that we would just take a peep, as we were not too sure if this was the correct place to be, as there were a couple of similarly-named places found in Google Maps.

Boy, were we glad that we went to the back, for we got to see how 叫化鷄 Beggar Chicken was prepared 😀 The owner was preparing the chicken, and explained to us how it was done, hehe! END_OF_DOCUMENT_TOKEN_TO_BE_REPLACED

We ventured to Johor Bahru by bus today!

Lunch was at this popular restaurant, and we made it a point to arrive before 11.30am. It was actually getting crowded already 😮 We quickly got ourselves seated and got some recommendations from the staff on what to eat 🙂 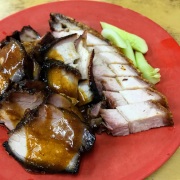 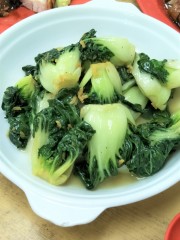 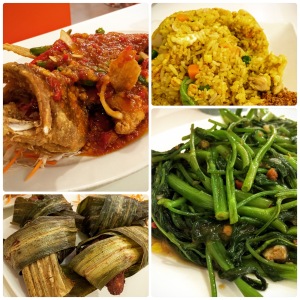 While our friends were enjoying themselves in Bangkok, we decided to console ourselves by having some Thai food 😛

We had walked past Magic Wok, a halal-certified restaurant, a few times before, and decided to give it a shot.

Without service charge, this is one of the more wallet-friendly options in Thomson Plaza.

Note: Plain water is available at 50 cents per cup.

Since we were seldom in this area, we decided to have our lunch here too… And of the many places that G suggested, we thought that Zaffron Kitchen looked pretty interesting.

We ordered a Zaffron Tandoori Platter ($39.50) and Garlic Naan ($4.50) to share… Wanted to try the Masala Tea, but had no idea how to enter it using the tablet menu… Seemed like it was not available.

It was a rather slow wait of close to 25 minutes for our food to arrive… We were hopeful that the food was worth the wait.

We were not disappointed!

The chicken items were tender and not at all dry. The lamb was just mildly gamey, and the fish was tender. The garlic naan was quite fragrant. We were happy with our lunch 🙂 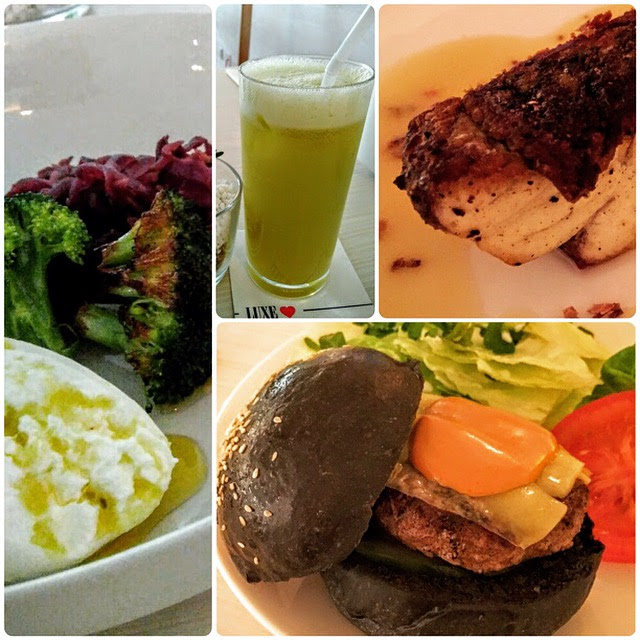 I was around this area waiting for hubby, and was looking around for dinner places. There were actually many food choices around this area, and I decided on Luxe because… The signage was appealing and the interior looked very welcoming!

Luxe originates from Sydney, Australia and this is their first overseas restaurant-bar, serving contemporary Australian cuisine with a Southeast Asian twist. 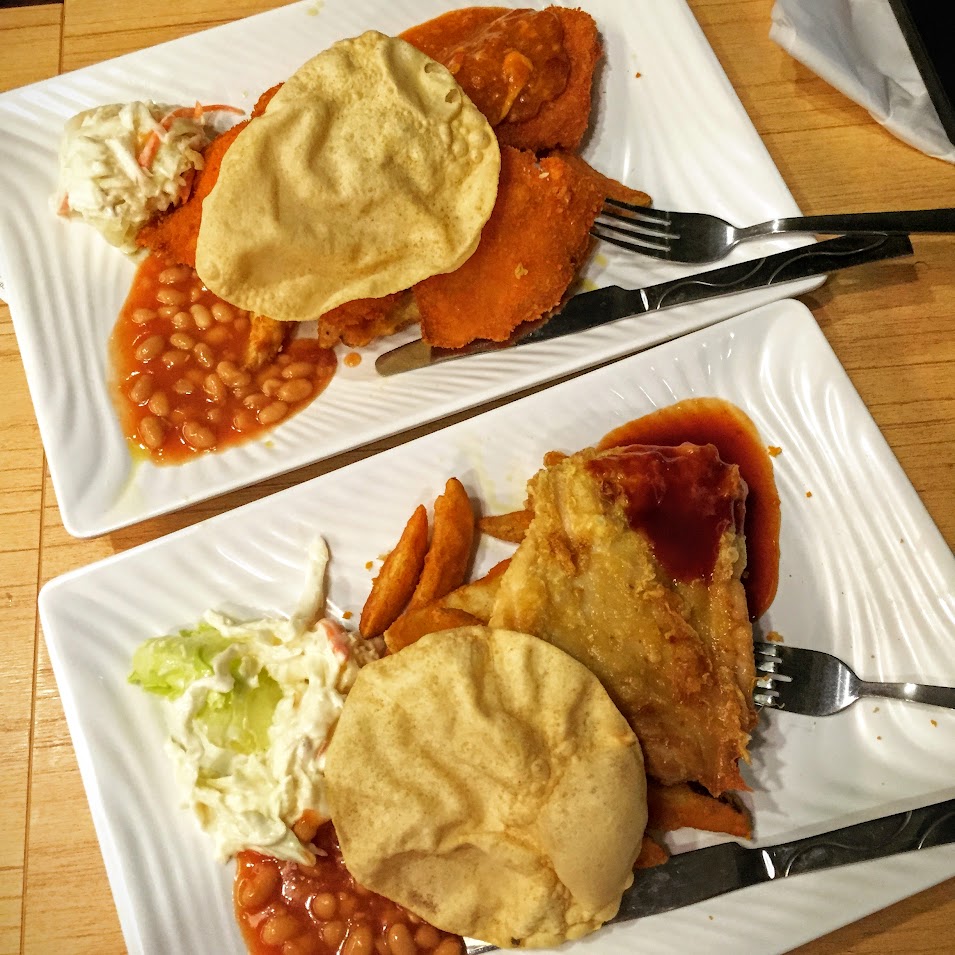 There was a 1-for-1 offer for Western food (usual price $8.90) at Mamak Culture, so we got ourselves a chicken with Hainanese sauce,  a fried fish with chilli crab sauce, and a less sweet teh tarik ($1.90).

The teh tarik was excellent! Very smooth and not too sweet or acidic, we finished the drink in no time!

We were in for a little surprise when we saw our mains. There were 3 fried fish fillets but only 1 not-too-big chicken thigh meat. The sauces were also given in rather small quantities and were barely sufficient. However, the chicken was very juicy, and we preferred it to the fish. I guess its a choice of quantity versus quality? Sides includes potato wedges, baked beans and coleslaw. Certainly value-for-money with the promotion!

We rather enjoyed the food, but the service was very slow. We had to wait for the staff to prepare the orders of the previous customers before he would take our orders. So it was a good 5 to 10 minute wait by the counter, followed by more waiting while they prepare our orders 😮 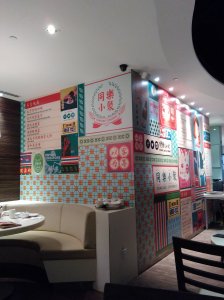 END_OF_DOCUMENT_TOKEN_TO_BE_REPLACED

After visiting British Museum, we wanted to spend the evening catching another musical or play. We tried for Matilda but it was full-house, so we settled on the hugely popular War Horse at New London Theatre.

After getting the tickets, there was still enough time for dinner so we wandered around the streets nearby and found this Great Queen Street restaurant which serves modern British food!

There are quite some tables on the ground level and there is also an alfresco area, with a cellar bar that opens till midnight (possibly for post-theatre drinks). There is a pre-theatre menu that serves quite a decent list of food, catering to the patrons of quite a good number of theatres around this area.

Some dishes on the menu were good for sharing for 2 or 3, but we didn’t had enough time, even though the description on the chalkboard looked awesomely tempting!