Note: Shin Yeh Bistro has ceased operations at this location.

There was a Deal on sale where you pay S$30 for S$60 worth at Shin Yeh Bistro in Novena so we bought the Deal and here we are again!

Have been craving for Taiwan food ever since we came back so this “sort-of” satisfy our cravings before we go Taiwan again! 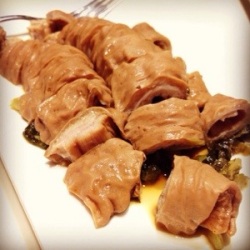 Braised small intestines: Still as good as ever! Loved the chewy texture and the intense flavour.

Toufu with century egg: Still nice but would have been better if the century egg was diced into smaller bits.

You Mai: They ran out of 豆腐乳, which was rather shocking, so we had to make do with stir fry garlic. Not too bad.

Fried vermicelli with pumpkin: This was delicious! We liked that it wasn’t too soggy or with too much gravy.

Three cup chicken: Yet another item that was not in the menu… We enjoyed this rather dry yet aromatic version!