Though the place mentioned Thong Shui, which literally meant “sugar water”, or desserts, we were actually here for the Golden Mee Hoon Kuih 黄金金面粉糕 (RM6.60 for small, RM9 for large, option of dry or soup). I seldom have good experiences with such hand torn noodles, as they tend to have different shapes and thickness, and the soup version is usually quite starchy. I had stopped eating this for years after having a rather bad experience with uncooked noodles -_-”

I gotta say this was a rather pleasing bowl of Mee Hoon Kuih (or Mee Hoon Kueh, as spelt in Singapore)! Firstly, the pumpkin dough gave the noodles a pretty colour, and the hand torn noodles were of similar thickness. The noodles were cooked just right, without being too soggy, or having parts that were uncooked. The accompanying ikan bilis (small fried anchovies) were very crispy, and the meat were tender. The noodles tasted slightly sweet, and after mixing in the sambal chilli, the entire bowl of noodles took on an extra layer of flavours 🙂 We really enjoyed this bowl of lovely Mee Hoon Kuih.

We also tried the signature <strong>Thong Shui Fried Bee Hoon with Rendang Chicken 招牌米粉和仁当鸡 (RM8), which was not bad, but paled in comparison to the noodles.,

We had a late dinner because we were really too full from this trip, and also because we waited a while for seats at this place and another 1 hour for the food to be served 😮

We had our super late dinner at 鸭肉扁 Ya Rou Bian, a rather established restaurant commonly featured in guide books. Despite having “duck” as the restaurant name, this place actually specializes in goose meat.

The restaurant underwent a facelift and definitely looked much more modern than when we first tried it in 2009.

The beehoon was the 新竹 style finely thin strands which we like, and the soup was quite flavourful. However, the goose meat was quite tough. Kind of sad that prices went up but standards went down…

We discovered our expiring Putien return voucher, and very promptly made reservations at the Kitchener Road branch, haha! Also because it just won itself a 1-Star in the 2016 Michelin Guide Singapore!

END_OF_DOCUMENT_TOKEN_TO_BE_REPLACED

So we decided to pop by afterall!

We were actually not really hungry, and thought that it would be difficult to tabao the claypot rice if we could not finish it, hence we had:

Note: Warm water is available at 20 cents per cup. We could not finish the food and ended up tabao-ing, incurring an additional 50 cents for 2 plastic boxes (not too sure if there would be additional charges if we opted for plastic bags instead). Only cash is accepted here.

Since we were going to Hoto Cafe later in the day, we figured that we should check out the area near it for lunch. There was only one small eatery nearby, but we figured it should not be too bad as there were consistently customers going in and out of the place. 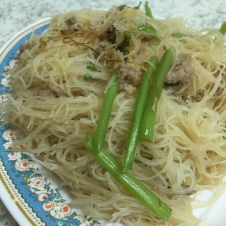 We tried the 肉丝炒米粉 Beehoon Stir-fried with Sliced Pork (NT70), and a plate of 炒花枝 Stir-fried Squid (NT150). The bee hoon tasted like 新竹米粉, which we like, and the celery with squid had a lovely wok hei to it. This was a simple, homely, and delicious meal 🙂

END_OF_DOCUMENT_TOKEN_TO_BE_REPLACED 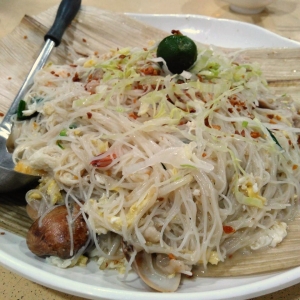 This is currently the place we go to whenever we have cravings for seafood white beehoon, especially when the queue at Sembawang is really getting far too long.

Located at i Coffee Shop just opposite AMKHub (Blk 347 to be exact), it is fairly easy to get to, and we have always managed to find seats without much hassle.

Hualong Fishhead Steamboat (華龍鱼頭爐) is the zhi char stall, and while we did enjoy the steamboat (which they are famous for), we much preferred the white beehoon! This version is of course, not quite the same as the Sembawang version, however, the $6.50 small version is delicious enough with lots of seafood, like prawns, sotong, and lala, all served on old-school banana leaf!

END_OF_DOCUMENT_TOKEN_TO_BE_REPLACED 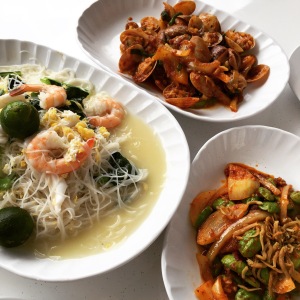 After our mini brunch (actually we had wanted to come straight from home, but alas, this place only opens from 11.30am, and we were really getting hungry), we made our way to You Huak Restaurant (友发餐室, better known as Sembawang White Beeboon! We made sure to reach slightly before 11.30am, because we were worried about the crazy crowds, especially when it was showcased in the newspapers a few weeks ago (when they announced another branch at Punggol).

We managed to reach around 11.25am and got the last table! So happy that we did not have to queue 🙂 Seems like they opened much earlier today, as some of the people were almost done with their food. We were just settling down and browsing the menu when, just like magic, at 11.30am sharp, a queue suddenly formed, stretching the entire length of the shop 😮

Food arrived rather quickly, just like the previous few times that we were here. While the beehoon was still delicious, we felt that the rich seafood gravy was too little today, and was not enough to give the beehoon a really good soak. Today’s sambal lala was alright, and I still think the version at Causarina Road is the best! The pedas was delicious as usual 🙂 I just hope that the standards will not keep sliding…

If you are thinking of trying the beehoon here, it would be best to come before 11.30am, or at odd hours like 3pm, to avoid the crazy queues. But if the queue is really too long, there are still many other food options nearby… In fact, the restaurant next door offers its own version of “wet white beehoon”, but this version is definitely not comparable.

Note: There is no GST or service charge.