[Here is the photostream of Ho Chi Minh City 2015, for those who prefer pictures to tell a story. 🙂]

We arrived at the airport around 5am in the morning for breakfast 🙂 Also, because the boarding pass indicated that we should still go to the airport early for verifications. Strange, but anyway, we did the self check-in since we did not have any check-in luggage, so we spent like 5 minutes to do all that, and went to the nearby coffee and toast for breakfast. Hubby decided on the Ham and Cheese Croissant Set ($5), while I settled for the Ham and Cheese Toast ($4.60), after observing the other customers eating not-very-appetizing-looking traditional toast.

The eggs were cracked for us, but I was not sure if it was deliberate that we each got 1 whole soft boiled egg and 1 broken egg. So we swallowed the whole egg and dipped the bread into the remaining runny egg yolk 😀 The ham and cheese were very salty and went better with the slightly buttery croissant.

After which, we breezed through security and went on to our flight without a hitch! Flight was kinda delayed in taking off, and I almost freaked out at the rather wobbly take-off, but everything went smoothly after that 🙂 My first impression of Ho Chi Minh City was that… there were a lot of buildings!

We got out of the airport and were immediately confused as to where to get a taxi. There appeared to be 2 queues, 1 for those with a taxi coupon, and 1 without. We were also mindful that we had to take taxis that are of either companies Mai Linh, or Vinasun, but none of the taxis were of these 2 companies. There was also a sign that we were not allowed to choose taxi. Finally, we decided to go in search of the taxi coupon, despite the additional cost. We went to a counter that advertised “taxi coupon”, but the staff at the counter did not understand what we wanted to buy. When we pointed at the signboard that indicated that taxi coupons were sold at his counter, he directed us to another counter instead… and it turned out to be a private car service. We were quoted VND220,000 (~S$13.50) and we decided to take it up to save us any further hassle. It was pretty good actually. We told the staff where we wanted to go, and she wrote the ticket with the hotel’s address, and we were promptly led to a spacious and clean SUV. 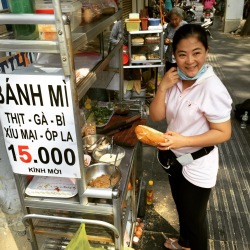 A short 20min ride later, we arrived at Liberty Central Saigon Citypoint Hotel! The hotel had a lovely lobby that I nua-ed in, while hubby deposited our bags. After which, we went in search for breakfast! The doorman gave us a great tip, and told us to try the Bánh Mì (Vietnamese style baguette) at the little stall on the left of the hotel main entrance. It was available only in the mornings, and he has eaten it countless of times. With his assurance, we got ourselves a Chicken Bánh Mì (VND15,000~S$0.90).

Wrapped in paper, it was a great combination of still-warm crispy crust and soft bread with pâté, meat floss, radish, cucumber, spring onions and mayonnaise, in fact, this was the best bánh mì we had during the trip!

Such a big bowl!

Energized, we began our 10min walk towards the Bên Thành Market, where we found Pho 2000, a chain selling Vietnamese noodles, and the former U.S President Bill Clinton had visited this branch in year 2000. Colleague G had emphasized that I must order the large bowl, because it was so worth it, and so we ordered a large Beef Pho, Spring Roll with Vermicelli, Iced Black Coffee, Coconut Drink and wet tissue set our wallets back by VND209,000 (~S$13).

The coconut drink was very refreshing, but the iced coffee was so-so. Hubby said that it was not the real Vietnamese coffee. The beef pho came in an enormous bowl, which was almost the size of our heads put together 😮 The broth was quite delicious, and there were various cuts of meats, but we actually enjoyed the spring roll with vermicelli more. Served dry, it was very addictive to eat the vermicelli with the dipping sauce, and the spring rolls were oh-so-good! 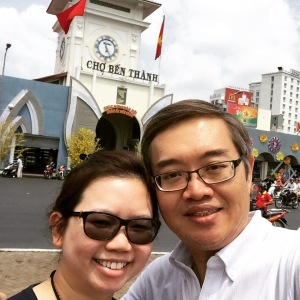 By now, we were too full and so made our way to check out the Bên Thành Market. We were first attracted by the wet market outside, and watched lots of chopping in action. Moving inwards, we were impressed by the sheer size of the market! There was actually a food section inside, and it was unfortunate that we were too full to try anything else; the prices were certainly much cheaper! We spent 45 minutes or so wandering within the market, but we were quite put off by the aggressiveness of the stall holders, who would try to block our way to get us to buy stuff. Finally, we could not take it and decided to leave.

This was when we decided to blur blur follow a lady cross a road with multiple lanes, thinking that she was going the same direction as we were… Suffice to say that it was one of the most exciting road crossing we had done for the trip! It was a circular road that was really leading to we-weren’t-sure-where.. haha! But we learnt that actually the scooters and cars did not travel all that fast, and if you stay focused, walk at the same speed and not be distracted by the honking, you would be able to cross the road pretty good 😀

Off we went to our next stop, the Fine Arts Museum of Ho Chi Minh City. With a very affordable entrance fee of VND10,000/adult, it was actually a pretty nice place to spend a couple of hours. Plenty of seats to rest our tired legs, as we walked from one exhibit to another. The museum was made up of 2 buildings, but we found the building closer to the ticket counter to be better. The second building was not completely filled up, and the art work less appealing to us. Do check out the private galleries downstairs for more art pieces to bring home. If you need a drink, instead of buying at the ticket counter, go to the Family Mart just opposite the museum and you can find more variety of drinks at cheaper prices. A large bottle of water cost only VND8,000. 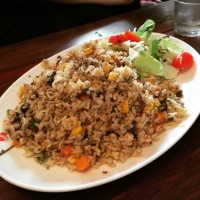 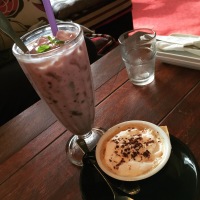 Hot and tired after the museum, we returned back to the hotel to check-in and refresh ourselves, before going to the nearby Geisha Café and Dining House for a super late lunch. Hubby wanted to sit at the second floor but they were using it for their own purpose, so we went up to the third floor instead. It was very cosy here, with plenty of books to read and board games to play!

While deciding on our orders, we were served a iced lemongrass drink that really helped to quench our thirst! We ordered a Geisha’s Special Fried Rice (VND89,000) to share. The rice was fried with pâté, Vietnamese pork roll, Vietnamese sausages and mixed vegetables was quite standard fare, but the pâté gave an interesting twist to the flavours. It was quite huge portion but I guess it was slightly on the expensive side. Hubby had a washed down Latte (VND49,000) and much preferred the iced coffee that he had at Pho 2000. My mixed fruit Yoghurt Shake (VND59,000) was quite standard, nothing very special.

As we were the only customers, we were largely left alone and had the entire floor to ourselves. Both good and bad, since we were unable to request for an additional set of cutlery… They gave us 2 sharing plates and 1 set of fork and spoon… Haha! We chilled for another 2 hours or so, browsing the books and surfing Internet, before going to hunt for a place to do some massage.

There was a Spa Nano Nature opposite the hotel that was having a week long half-price promotion due to Women’s Day (aka 三八妇女节), but they were fully booked, so we could only make a reservation for the next day. Off we went to roam around the area before making our way towards Bên Thành Market area, as we had intention to have dinner at the market. That was when we spotted Jolene Spa, and decided to try our luck. It turned out that we were very lucky indeed!

The original prices were about 60% of that in the earlier Spa place! We paid VND280,000 each (~S$17!!!) for a 60-minute ordinary oil massage, and it was extraordinary! We were led to a couple “room”, which was separated from other “rooms” by curtains. However, the area was very quiet; the therapists would lower their voices if they had to speak, and it was pretty relaxing! The massage started from the front, which was different from the usual massage that tend to start from the back. Halfway through, we could hear the therapists start peeling cucumber slices, and we even felt some of the cucumber juice splash onto us. Next thing we knew, they started putting the cucumber slices on our face. Ahhhhhhh! it was very cooling; perfect after an entire day under the very hot sun! The strength of the massage was just-right, and we could feel our aches melting away. The back massage turned out to be even better when they started applying hot stone therapy. This was totally value-for-money; there was no need to pay for the more expensive hot stone therapy, and there was a facial mask thrown in. We felt totally refreshed after the massage!

Happily, we went on to find dinner. Circling around the market, we ended up at one of the stalls to have hot pot and a Saigon beer. At VND265,000 (~S$16), it was exorbitant, given the very inadequate variety and amount of ingredients for the hot pot; totally different from the picture! It gave a new definition to “pictures are for illustration purposes only”…. Phhhhffff! Our worst experiences were all from the market 😦

Walking back to our hotel, we grabbed a 5-litre bottle of water at one of the convenience stores for VND20,000, to hydrate ourselves. The weather here was really quite hot, and the consolation was that it was less humid than Singapore. The rest of the night was spent doing water parade… Haha!