Our last meal in Beijing was 涮肉 (typically mutton shabu shabu), and we wanted to try the 老北京铜锅 which is a traditional bronze hotpot with charcoal inside and a trench of water at the rim for shabu-ing the meat.

We found one near our hotel that looked quite traditional (because it’s housed in an old traditionally-looking building which we later realized was what the name of the restaurant 四牌楼 referred to) and had a few customers and has the words 百年老店 (which meant that it was a time-tested brand and literally around for 100 years), so we figured it should not be too bad.

Of course, there were also many restaurants that claimed to be 百年老店 or 老字号 as we had found out in this trip, haha. 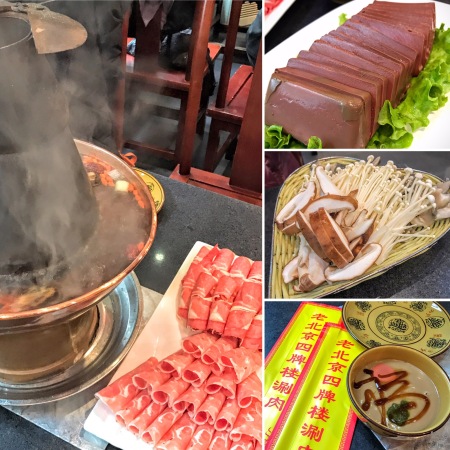 The meat platter and duck’s blood came rather fast, but we had to keep reminding the staff for the mushroom and vegetable platters. In the end, we had to cancel the vegetable platter order because it did not arrive after asking for it at least 3 times, and we were running short of time.

The soup base was just plain water with some wolfberries and mushrooms. The meats were sliced very thinly, but not much flavour. However, the mutton was not gamey.

The mushrooms were definitely very fresh. The duck’s blood was also delicious and did not have any gamey taste, which was usually evident when we try it in Taiwan.The sesame sauce was strong, flavourful and pretty with a 福 fortune symbol drawn on it with oyster sauce.

The sesame sauce was strong, flavourful and pretty with a 福 fortune symbol drawn on it with oyster sauce.

However, it was definitely more fun having the traditional charcoal hotpot, compared to the gas or induction cooker types. There is actually a much more popular 东来顺 Dong Lai Shun which is most famous for mutton hotpot, but we had gone into one branch previously at 王府井 Wangfujing, and the exorbitant prices put us off. So we were quite contented with this quick lunch.

Service-wise, the staff were pretty friendly when taking the initial orders, but they tended to avoid eye contact and it was difficult to catch their attention after that.