We haven’t been to Suntec City for a long while and boy, so many things have changed! There were also many new food options available, so after some consideration, we decided to try out Kimchi Korean Restaurant instead of the ramen restaurant 2 shops away, thinking that we might want to linger a while longer and the ramen shop is probably not so ideal for a long meal. Both had very good online reviews though!

We arrived just before 6.30pm and requested for a table of 5. The waitress responded that she had a table available but we had to clear out by 7.45pm. We declined and was offer an alternative 4-seater with an extra chair, which was fine, since the table was quite huge 🙂

We ordered 2 soups (bean paste and spicy seafood broth), 2 of the highly recommended Andong chicken and 1 fried chicken ramen for mains. For each main dish ordered, we could order 3 side appetizer dishes if we topped up $2, so 4 of us took up the option and select our top 3 favourites out of the 6 available options. We also ordered kimchi pancake, gyoza and fried chicken to share.

It was very interesting to note our appetizer options! On the table were plates of: 3 kimchi, 3 anchovies, 2 pickled radish, 2 Korean salad, 1 fried seaweed and 1 pickled spring onions. So we could see which dishes came out tops… Haha! I must confess, when I ordered the pickled radish, in my mind I was really thinking about pickled lotus roots instead 😛 The fried seaweed looked like those Japanese seaweed packets found in the supermarkets, and the pickled spring onions were SO salty. The anchovies were the bigger type, and were not that crispy. The Korean salad was interesting, but I could not figure out what was used… 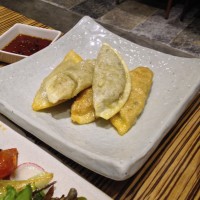 The kimchi pancake looked more like a salad, with the greens all over the very thin slices of pancakes.

Unfortunately, we all thought that the pancakes could do with a longer time in the pan; there was not even a hint of crispness to them.

Gyoza was crispy though, and the fillings were quite unique, consisting of minced meat and rice vermicelli (tang hoon).

Among the sides, I enjoyed the fried chicken the most! Crispy and coated with a delicious tangy sauce, topped with toasted almond flakes, it was good!

For the mains, both soups were quite delicious, though the seafood version was more flavorful and more spicy. The ingredients in the soups seem to be exactly the same.

The Andong chicken was deliciously flavorful! It went very well with white rice. The tang hoon absorbed all the flavours of the gravy without becoming overly soggy and I really enjoyed it too 🙂

Unfortunately, both portions must have been cooked at the same time and not properly distributed, as Ms W had plenty of chicken and little tang hoon, while hubby had a seemingly never-ending amount of tang hoon…

The most disappointing main was the ramen. Instead of fried chicken as indicated in the menu, it came with a miserable amount of shredded chicken. When we enquired, the waiter went to check and came back saying that the ramen was now served with shredded chicken. Ms V felt totally cheated!

Later during payment, hubby mentioned the change to the counter staff and then discovered that they had changed the menu 2 days ago. No apologies from any of the staff, and no one bothered to explain the change in menu when we ordered. Hubby was advised to fill in the feedback form if he wanted to -_-

It could have been a more pleasant dining experience, and left me feeling rather regretful that we didn’t go to the ramen restaurant 2 doors away instead. Will I return? Perhaps to try the BBQ selection, and probably not in the near future, as it will probably take them a while to work out the kinks in their service.