After visiting the gorgeous 해동용궁사 Haedong Yonggungsa Temple 海東龍宮寺, we decided to head to 해운대전통시장 Haeundae Traditional Market 海雲台傳統市場 for lunch. It was a 25-minute cab ride (₩9,800).

We reached before 12 noon, and the area was still quite empty. We checked out the market to see what fresh produce the locals were selling, as well as some shops selling cutesy items (socks!!!).

There were a lot of seafood eateries, and we had originally wanted to try the 곰장어 hagfish/blind eel 盲鰻, but the eateries seemed to be all empty, and we were not sure which one to choose.

Hence, we ended up at the popular eatery 상국이네 김밥 Sanggukinae Gimbap 相國家飯捲 recommended in the guidebook. Indeed, queues were forming before lunch time, and we had to go to the second storey to find seats.

There was a huge menu on the walls, and we spent some time doing Google translate to figure out the Korean words. Eventually, we decided on a Set B (₩19,000, or 19.0 as indicated on the menu),which worked out to be slightly cheaper as compared to ala-carte orders, and this would give us a chance to try out more variety. 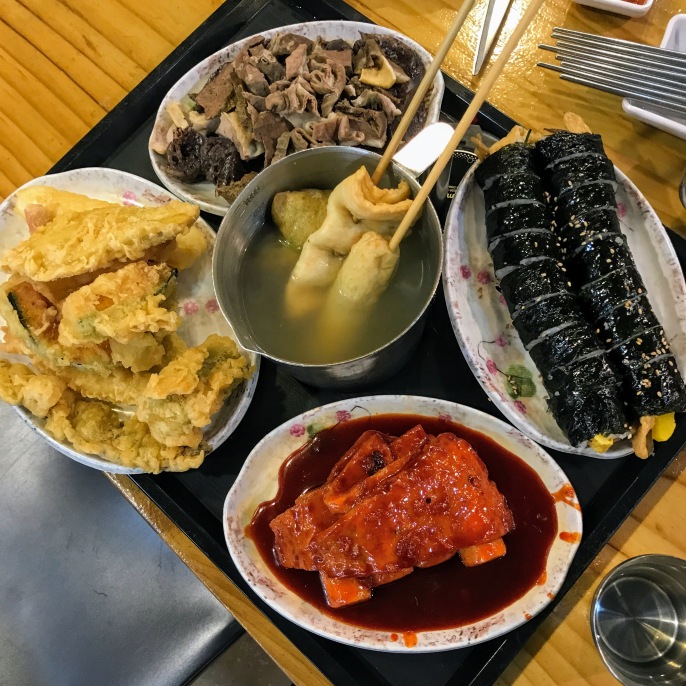 We also had a separate order of 오뎅 (Odeng) Fish Cake 黑輪 (3 pieces for ₩2,000), and it was certainly a good idea to have something hot on such a cold day. We also felt that the fish cakes had a good bite, and not very flour-ish.

Kimchi, pickled radish, sauce, etc, and cutlery were available at the self-service counter, and we really enjoyed the side dishes here 🙂

Overall, a very affordable and rather delicious meal!

After lunch, we popped over to 해운대해수욕장Haeundae Beach 海雲台海水浴場. As it was not summer, there were none of the pretty umbrellas that we have seen in the guide books 😦 So, we just took a few touristy shots and left 😛

Went to the nearby Starbucks for some much needed caffeine and very strong Wi-Fi 😛 I tried the Jeju Houji Tea Latte (₩5,800), which I thought was not bad, while hubby thought that his Americano (₩4,200) was just alright.

When we were fully recharged, we continued to stroll to 고래사 Gorensa Fish Cake Cafe 古來思魚糕. Wow, there were so many types of fish cakes 😮 Decisions, decisions! Each of us picked one, and we ended up with

There were seats available upstairs, and we could heat up the fish cakes in the microwave before eating. There was a friendly staff  who helped us heat up and cut our fish cakes. 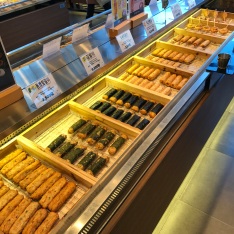 Our favourite was the cheese! We also felt that the fish cakes would taste better if they were more warmed, but since we already started eating, it would be too impolite to reheat the fish cakes :S This place also sells noodles / soup, so it is possible to have a proper meal here 🙂 This is also a tourist-friendly place, with English and Chinese instructions on how to eat 😀

In fact, this mall is listed as the world’s largest department store in the Guinness Word Records, so we definitely gotta check it out 🙂 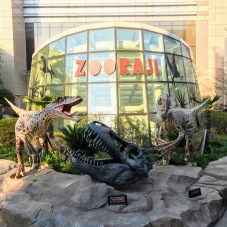 Our first stop was Zooraji on the 9th floor, where we had lots of fun at this dinosaur-themed park 😀 We could also get a lovely view of the surrounding areas 🙂

We did not really do much shopping, but of course we had to visit Basement 1 for more snacking 😀

First thing that caught our eye was the Namachoco Croissant 巧克力可頌 (₩3,500) by Royce’! Don’t think we ever saw this in Singapore, and it was worth every Korean Won 😀 It was very fragrant and despite being very chocolatey, it was not overwhelming or too sweet; simply awesome! We could not get enough of it! Next thing that we wanted to try was the 하나야끼 Hana Yaki はなやき (₩3,500 for the bacon egg flavour), which reminded us of a mix between okonomiyaki and Japanese red bean pancake.

Then, we ran out of stomach space and time, because we wanted to be early for the 광안대교 (Gwangandaegyo) Gwangan bridge 广安大桥 lights up at 광안리 해수욕장 Gwangalli Beach 廣安里海水浴場.

The sun was setting as we exited the subway station, and we managed to enjoy more cherry blossom views along the way to the beach 🙂 As we were quite early, we found a good spot to park ourselves, and watched others play with fireworks.

The lights up started shortly after 8pm local time, and while it was rather pretty, we did not think it was spectacular enough to be worth the 45-minute wait in the (very) cold weather. Oh well, I guess we were way too early

By now, we were starving, and we decided to patronise a busy-looking BBQ restaurant which we walked past earlier, 육갑 Yukgap. There was a staff who was able to speak some English, and recommended that we try the BBQ set (₩22,500), which came with 2 types of meat, soybean paste stew, steamed egg, and a bottle of soft drink. We also got ourselves a serving of mushrooms by pointing to the dish at our neighbouring table 😛 Side dishes and were available at the counter. The staff demonstrated on how to cook the meat and then left us to do it ourselves. It was pretty fun, but we wished we could read Korean to figure out what other types of meat were available.

We were so stuffed after our late dinner, and we returned to our hotel happy and filled!