We wanted brunch, and were the first customers waiting outside this hotpot restaurant 😛

For ¥160, we thought the food was not bad, and the meal became nicer because there was 猪血 Pig’s Blood.. haha!

It had been a while since we last visited 九份 Jiufen, and our main objective today was to laze our afternoon away drinking tea (just like what we did 9 years ago) 🙂

We took the train to 瑞芳火車站 Ruifang Train Station, and as it was close to noon, we figured we should grab a bite first at the 瑞芳美食街 (Ruifang Food Street) just opposite the train station.

Once again, we got ourselves a 龍鳳腿 Dragon Phoenix Leg (NT10), which was made of minced chicken and cabbage wrapped by 豬网油 (layer of pork lard which looked like spider web) and then deep fried. This was still as good as ever! We also had 貢丸湯 Meat Ball Soup (NT30) and 豬血湯 Pig’s Blood Soup (NT30) because the vampire wife needed her dosage to satisfy her bloodthirsty cravings 😛

END_OF_DOCUMENT_TOKEN_TO_BE_REPLACED

Located in the Dwaeji Gukbap Alley 豬肉湯飯街 at 서면 Seomyeon 西面, this was a popular restaurant famous for its pork soup with rice, which is a must-eat when one is in Busan. The staff were very friendly to the many tourists, and through the English mixed with Mandarin explanations, we were able to place our orders.

We got the 순대국밥 (Sundae-gukbap) Korean Blood Sausage Soup with Rice 血腸湯飯 (₩6,500 nett),  내장국밥 (Naejang-gukbap) Pork Tripe and Intestine with Rice 內臟湯飯 (₩6,500), and instead of the 돼지국밥 (Dwaeji-gukbap) Pork Soup with Rice 豬肉湯泡飯 version (₩6,500 nett) where the sliced pork, rice and soup were all mixed together, we opted for the other version 수육백반 (Suyuk Baekba) Set Menu with Pork Slices 白切肉白飯 (₩8,500). In this version, sliced pork was served separate, along with an array of mee sua (rice vermicelli), kimchi, and other condiments, such as marinated chives, green chilli, garlic, onion, shrimp paste, soybean paste, soy sauce, etc.

END_OF_DOCUMENT_TOKEN_TO_BE_REPLACED

We checked in to our hotel on Lebuh Chulia in the late afternoon, and after a good rest in the hotel, we went to check out the night market scene at Kimberley Street.

This street (Lebuh Kimberley) is a major street food venue in George Town and there were many stalls and kopitiams or coffee gardens along both sides of the street at the junction of Lebuh Cintra and Lebuh Kimberley. This street is also just a short walk from our hotel on Lebuh Chulia (part of the reason to stay at Lebuh Chulia!).

END_OF_DOCUMENT_TOKEN_TO_BE_REPLACED

Today was our last night in Taipei *sob*, and we really wanted to cover 景美夜市 Jingmei Night Market, and 公館夜市 Gongguan Night Market, as they were just 2 stations apart.

Being a Monday night, we expected that some stalls might not be open. But that was fine with us, as there were plenty of everything else to eat.

The area at 景美 Jingmei is a 市场 market place in the day with shopping and food, and as night falls, it turns into a night market as other push cart style food stalls begin their operations. We were here from late afternoon, and manage to do a little shopping before dinner. The prices here seemed to be slightly cheaper.

END_OF_DOCUMENT_TOKEN_TO_BE_REPLACED

We arrived at Taipei rather late, after our long lunch at 羅東 Luodong. We were still very full by dinner time, so we decided to swing by the nearby 寧夏夜市 Ningxia Night Market for some small bites.

We recalled in our previous visit, we tried 2 oyster omelettes. This time, we decided to try from 圓環邊蚵仔煎. In addition to 蚵仔煎 Oyster Omelette (NT65), we also ordered 蛤仔湯 Clam Soup (NT65). The oyster omelette was fluffy with some chewy but light bits. It had at least 11 fresh juicy oysters, which was definitely way more than the non-existent version that we tried previously. We also like the sauce, as it was not overly sweet, and the amount was just right. The clear clam soup was light and sweet, and filled with plump clams.

Happy with our first bites, we went to revisit an old stall for 豬血湯 Pig’s Blood Soup (NT45) and 鲁肉飯 Braised Pork Rice (NT25). There were plenty of huge pieces of pig’s blood :D. The gravy of the braised pork was very delicious, but the rice used was just alright.

Finally, we decided to pack some vegetables from 李家鄉滷味 back to our hotel to eat. The queue was slow-moving, as the lady was rather meticulous in weighing the items to ensure fairness. For NT160, we had a huge bag of 杏鲍菇, meat balls, broccoli, beancurd, white bamboo shoots. We enjoyed every bit of it and went to bed very satisfied with the entire day! 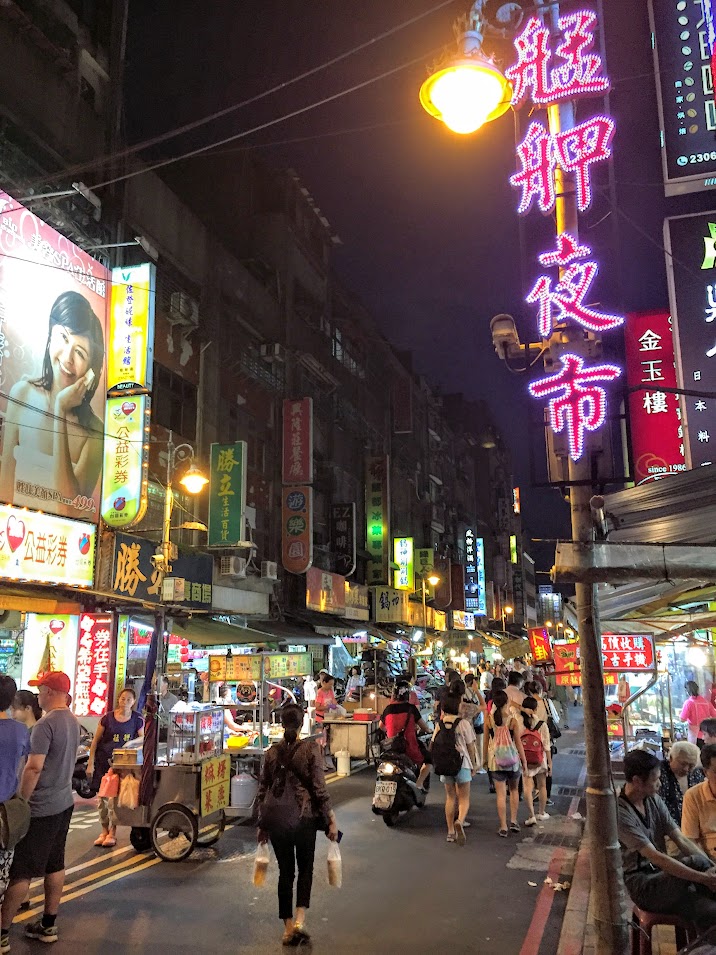 After lunch, we went back to the Pintoo shop and got what we came to Taipei for: loads and loads of puzzles! We bought so much we had to pack them into a carton box to carry it! And it had to rain just when we were about to walk back to our hotel! Totally unexpected because we read that Taipei would be hot summer the whole while! In any case, we walked back to the hotel in a small umbrella and a huge carton box of puzzles. 🙂

After checking in to our hotel and a short rest, it was time to hit the Night Market!

There are 4 night markets near Longshan Temple MRT 捷運龍山寺, 3 of which were kind of interlinked. So we did the Guangzhou Street 廣州街觀光夜市, followed by Wuzhou Street 梧洲街夜市, and Huaxi Alley 華西街觀光夜市, before walking over to Xichang Street 西昌街夜市.
END_OF_DOCUMENT_TOKEN_TO_BE_REPLACED 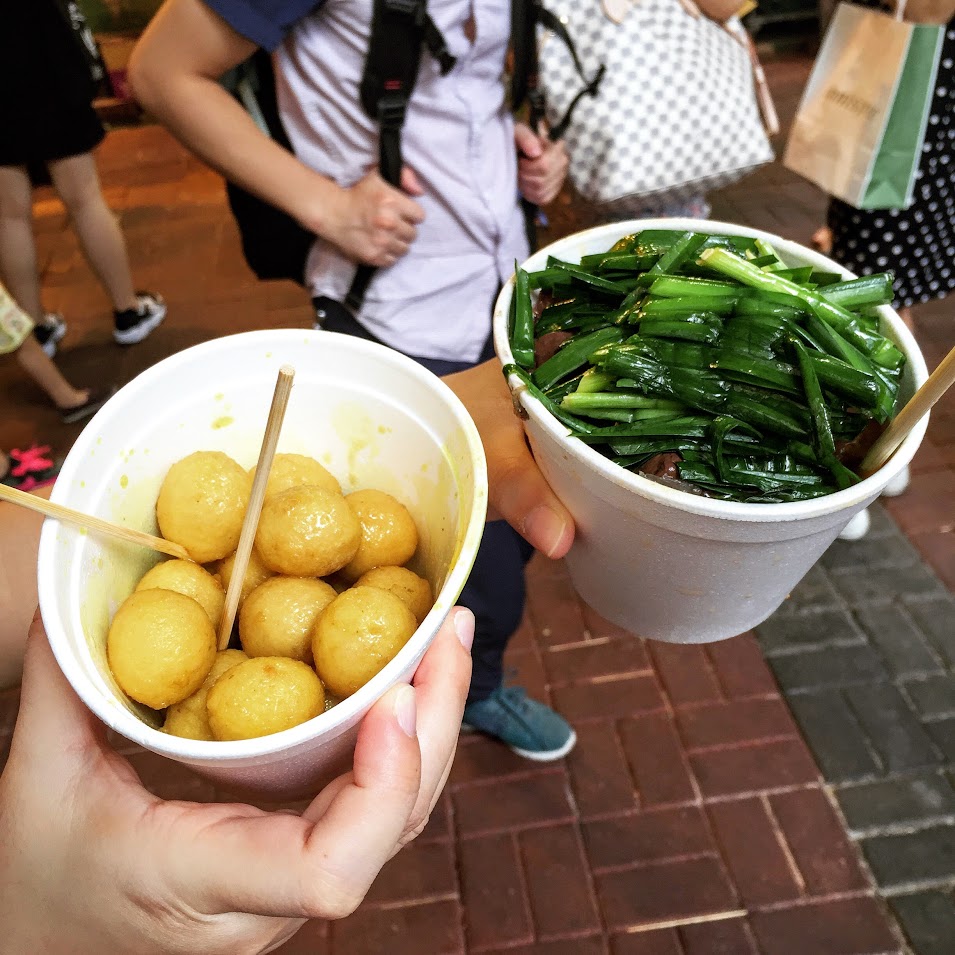 For our last few trips to Hong Kong, we would always come here for some street foods, and this time it was no exception too 🙂

Located just by the exit of the very long overhead bridge, there was always a crowd in front the this shop. We had a large bowl of 猪红 Pig’s Blood (HKD 20) and a small bowl of 鱼蛋 Fish Ball in Curry Sauce (HKD 10). There were a lot of fish balls, which hubby enjoyed very much. And of course, I totally enjoyed the smooth cubes of pig’s blood! My friends call me a vampire :X

But actually, when mummy first fed me this when I was young, I did not know that it was actually blood… It looked like dark bean curd. So many years down the road, when I finally realised what it was really made of, ah… It was kind of too late to stop 😛

Half day trip to Railway Market and Floating Market @Bangkok

Today would be our activity day!

We had breakfast with bread bought from the 7-11 store just beside the hotel when we came back last night after a long day of shopping and walking around Chinatown.

We had 8 adults and 3 children, so we managed to pre-book a half day tour in advance, and the driver-cum-tour-guide came to our hotel to pick us up in a very comfortable van.

The first stop was the Mae Klong Railway Market, and we had close to 45 minutes to wonder around the market before the scheduled train arrival.

Most tourists were at the stalls lined along the railway tracks, but there were actually many more stalls behind them, much like our local wet market.

END_OF_DOCUMENT_TOKEN_TO_BE_REPLACED

Happy Women’s Day!! Today, we left our rooms much later than planned (because it’s gonna be a long long day!), and headed straight to One Dim Sum 一點心 near the hotel, because we have read good reviews about it (and also because we didn’t had enough of dim sum)!

One Dim Sum is the other One-Star Michelin dim sum place that doesn’t break your wallet (the more famous one is of course Tim Ho Wan 添好運). It opens daily from 11am on weekdays and 10am on weekends. Right from the moment it opens (in fact probably before it opens), a long queue would be formed. Waitresses will start handing out waiting numbers and number of pax on a piece of paper, and the big wait will begin. The restaurant has big glass windows so those waiting can drool on those eating. 🙂