After movie, we went to Hong Sheng Wanton Noodles 鸿昇云吞面. It was crowded at 8.30pm and we had to wait a while for seats.

We ordered 3 small bowls of Wanton Noodles (RM5, RM5.50, RM6 for small, medium and large). There was a signage that indicated we should order first before finding seats, but we did not as we were worried it might take a while to get seats…

We later realised that a good gauge could be to see how many bowls were stacked up as orders waiting to be filled. The noodles felt traditional and homely, giving this 古早味 feel. There was a slight alkaline taste to the noodles, which could be covered by adding chili sauce.

After our morning hike, we were starving!

After some Googling, with our wobbly legs, we wobbled over to the nearby 興記雲吞麵 Xing Ji Noodle Shop.

A small eatery, the DIY menu and prices were pretty straightforward. We could choose up to 2 items, and there were 4 kinds of noodles for selection.

We quickly got ourselves a 招牌雲吞幼麵 Signature Wanton Thin Noodles (HK$17) and a 牛腩鯪魚球河粉 Beef Brisket and Dace Fish Balls Hor Fan (HK$22) to share.

The noodles was really springy, and the wantons were huge and fresh. The hor fan (rice noodles) was smooth and easy to slurp. The huge dace fish balls and beef briskets were delicious too. Unfortunately, the soup was a tad too salty for us, and we had to go in search of water after our otherwise rather delicious meal.

Posted on 4 September 2016 by lendeliz

We read that there were a lot of good food here, and indeed, there were many stalls with snaking queues on this Sunday noon time. After surveying the place, we decided to try out 2 of the stalls.

END_OF_DOCUMENT_TOKEN_TO_BE_REPLACED

We were here for a late lunch, and the queue at Honolulu Cafe was too long. So, we headed to the empty Mak’s Noodles instead.

The wantons were alright, but also reminded us of the shrimp dumplings that we used to buy at NTUC. We very much preferred the very flavourful beef brisket and tendon.

When we went to the counter for payment, the staff just responded with the total cost without even bothering to print the receipt, gosh!

Not exactly a satisfying lunch, so we decided to return to queue at Honolulu Cafe and hoped for the best… Somehow, this reminded us of our Hong Kong trip… 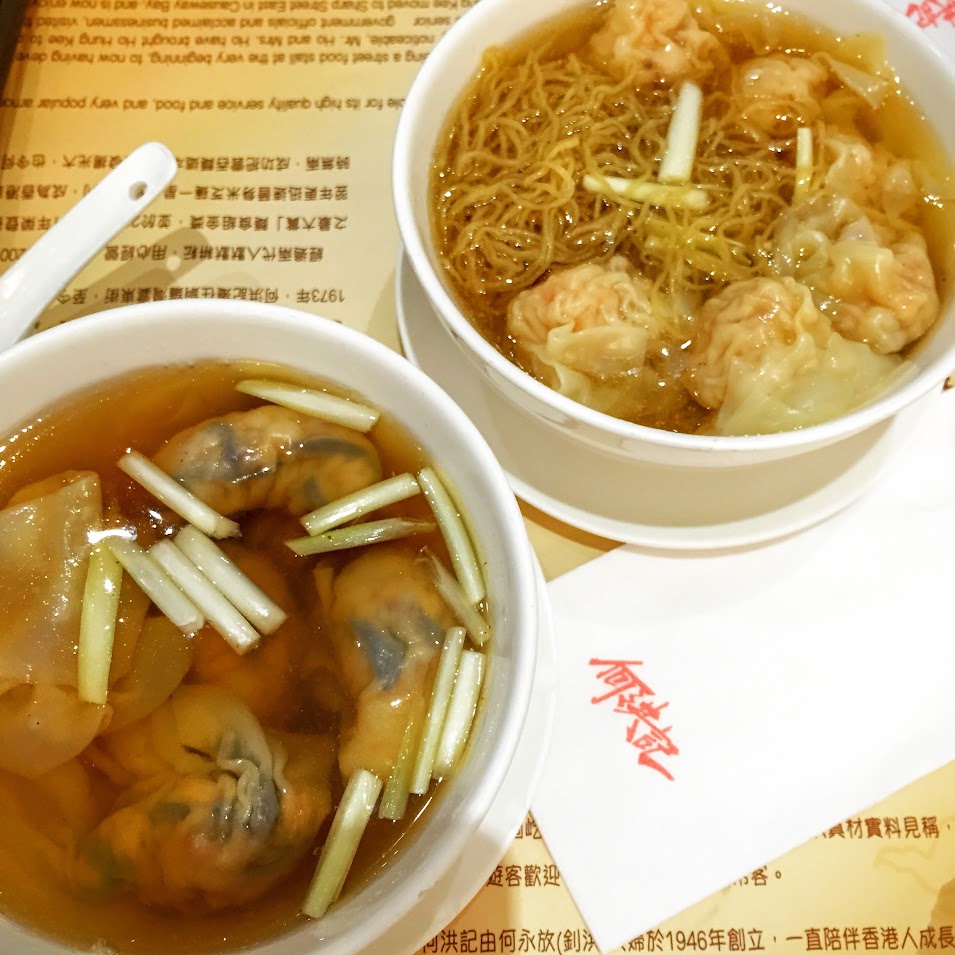 This one Michelin Star wanton restaurant 雲吞麺 has been on our list for a while, but we never quite made it here during our last couple of trips. This time, we made it here for dinner!

At 6pm on a Saturday evening, it was quite crowded but still had some empty seats, and we were seated immediately 🙂

The environment was rather posh, and so the prices were rather upscale as well, with some abalone porridge going for HKD 300+! The dim sum prices were not too cheap either. Hence, we decided to stick to the basics and ordered a large Wanton Soup with Noodles (HKD 56+) and Shrimp Dumpling Soup (HKD 58+). Tea was HKD 3+ per person, with additional 10% service charge imposed.

Our food came quickly, and we were a bit surprised at the size of the bowl… Rather tiny? Gotta say that the wantons were quite flavourful and delicious, but the shrimp dumplings were quite bland, despite all the extra ingredients 😦 The soup was not bad, just a tad too pepperish. The noodles were very disappointing, as it was not at all springy, and it fact, quite tough to bite. The only redeeming point was that the thin noodles did not grow fat after soaking in the soup for a long time.

We could not believe that this was so-called Michelin Star standard!

Anyway, posh did not mean good service as well. The girls at the table next to us found worm when they were close to finishing their plate of vegetables, and when they complained to a waitress, she was like.. “So? Change another plate for you?” We also overheard the manager saying that since they almost finished the food, they had to pay for it. But the girls also did not appear to be those that would pay without a fight, and they were saying that no way they would pay for it! Not too sure who won the battle in the end, but we didn’t hear any quarrels from the payment counter. This was also not a place to linger, for our bowls were cleared very quickly after we were done, giving us a very clear and not-so-subtle hint to leave this place.

For this price, we are definitely not coming back again!

What a flooding day today! We had to look for a place with shelter from the train station and decided that AMKHub was a better bet.

There was a not-too-big Sheng Kee at a quieter corner and we managed to get seats!

The cheong fun was unexpectedly spicy because of the minced meat 😮 The bacon chicken roll with mushroom sauce noodle was something new, but we still preferred the signature combination noodle, as it had more ingredients 😀

This is a new place along Upper Thomson, and we thought we should try it before its gone!

Ok lah, to be fair, not many restaurants along this stretch did wind up, but we have seen a few during our recent years of roaming around this stretch!

This restaurant is just beside Huay Kwang Thai and we believed it took over a Malay food stall (which we had tried once).

The interior is simple with cement floors and fixed tables. The interesting part about the tables is that the waiters can put a plank between 2 tables (there are groves along the edge of the tables to fit the plank in) and make it into a table of 4! Of course one can put more planks and turn the tables into one huge communal table. How innovative!

END_OF_DOCUMENT_TOKEN_TO_BE_REPLACED

The famous Soi 19 wanton noodles has arrived in Singapore!

Soi 19 (19 街) is apparently a very popular wanton noodles near Platinum Fashion Mall in Bangkok. But of course we didn’t know that since it was ages ago that we went to Bangkok. After hearing about this place from Ms W, we gotta come here and try it!

At around 9.15am when we arrived on a nice Sat morning, there was already a snake-long queue formed! However, the queue moved along quite fast and we managed to get our noodles after a 15 minutes wait.

We also found out later that you could order a Regular and top up a dollar for the yummily-fried lup cheong!

END_OF_DOCUMENT_TOKEN_TO_BE_REPLACED

We decided to come have some famous wanton noodles!

For $4, we got a plate of noodles with 4 fried wantons, 2 soup wantons, and some char siew. The noodles here were indeed QQ, and the fried wantons were very crispy, but we didn’t think too highly of the soup wantons or dumplings ($4), as the meat was rather bland and they were too generous with the fillings 😛 So it’s best to stick with the fried stuff!