The first night, we decided check out the Longkang Siham, loosely translated as blood cockles by the drain. This is a back alley that is famous for cheap and fresh seafood, where patrons sit on tiny stools along long steel tables, accompanied with whiffs from the drain.

There were 2 stalls here, and we opted to try out the Capitol Seafood 佳必多祖传海鲜小吃 first. We ordered Lala (RM2 per portion), Kerang (blood cockles, RM2), Bendi (lady’s fingers, RM2), and Sotong Kangkong (RM7).

While we were initially a little apprehensive, we were pleasantly surprised that the seafood tasted fresh and sweet 🙂 The seafood and lady’s fingers were just boiled with water, and came with accompanying sauces; so simple, yet so memorable. In particular, we could even choose how well cooked we want our cockles to be; normal worked well for us.

END_OF_DOCUMENT_TOKEN_TO_BE_REPLACED

Ms K brought us to a place where she used to frequent, and we were glad that she did 🙂 Here was what we tried.

Posted on 9 December 2016 by lendeliz

四季煲仔飯 Four Seasons Pot Rice was highly recommended by my cousin, and it was very near 美都餐室 Mido Cafe.

After a relaxing afternoon tea, we strolled to 四季煲仔飯 and discovered that a queue had already started forming just after 6pm. The queue moved quite quickly though, and we got our seats around 20 minutes later.

We got ourselves a 臘腸滑雞飯 Chinese Sausage and Chicken Claypot Rice (HK$53)，鴨蛋蠔餅 Duck Egg Oyster Cake (HK$20 for 2 pieces), and 通菜 Kangkong with Fermented Beancurd (HK$40). Food arrived quite quickly too!

The 鴨蛋蠔餅 Duck Egg Oyster Cake had the aromatic duck egg flavour and there was a generous amount of oysters. The batter was quite light and crispy. Overall, it was not too oily, and we really enjoyed it!

The rice in the 臘腸滑雞飯 Claypot Rice was really fragrant and soft! Really quite awesome, but the charred bits would stick and were not as crispy as the one we had at 坤記 the previous night. The Chinese sausage was yummy too! The chicken was very tender. We really liked the claypot rice here!

The vegetables was a good way to balance out the meal, and as usual, fresh and delicious 🙂

We had wanted to return to Kyushu Pancake Cafe to try French toast, but alas, it was all sold out 😦 So we went to the next most popular restaurant during this hour, Rochor Thai 🙂

Got ourselves counter seats where we could watch some chef action, but it turned out that all the dishes we ordered were prepared inside the kitchen, haha:

END_OF_DOCUMENT_TOKEN_TO_BE_REPLACED

While our friends were enjoying themselves in Bangkok, we decided to console ourselves by having some Thai food 😛

We had walked past Magic Wok, a halal-certified restaurant, a few times before, and decided to give it a shot.

Without service charge, this is one of the more wallet-friendly options in Thomson Plaza.

Note: Plain water is available at 50 cents per cup.

We took our time in the morning and had a late breakfast at the hotel.

After that, a slow stroll brought us to St Paul’s Hill, and A’ Famosa Fort.

We continued to stroll to the famous landmark of Melaka, Christ Church Melaka before making our way back for lunch at Restoran Nyonya Makko!

We had heard good reviews of Amy Heritage Nyonya Cuisine which is just behind Hatten Hotel but we were not able to get reservations (it’s very very popular!). So we settled for Makko which is also near the hotel and we had been here 5 years ago.

END_OF_DOCUMENT_TOKEN_TO_BE_REPLACED 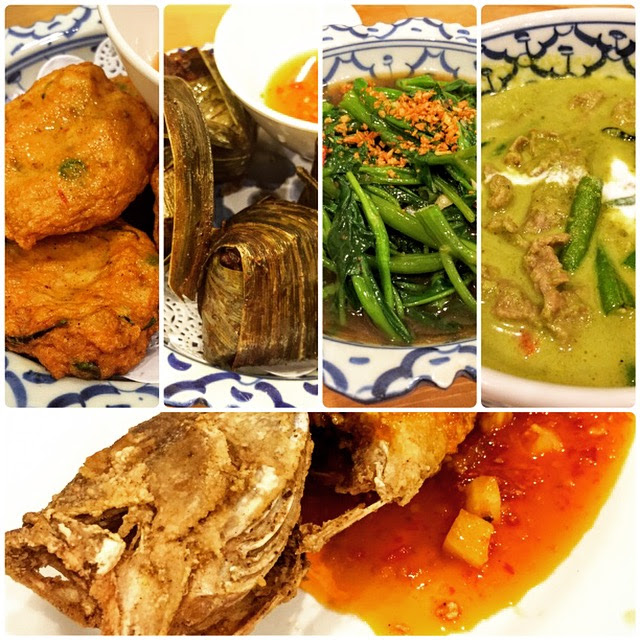 We were very impressed by the endless queue each time we walked past, and this evening, finally, there was no queue at 9pm! Very hungry, so we attacked our food with gusto!

END_OF_DOCUMENT_TOKEN_TO_BE_REPLACED

This is currently the place we go to whenever we have cravings for seafood white beehoon, especially when the queue at Sembawang is really getting far too long.

Located at i Coffee Shop just opposite AMKHub (Blk 347 to be exact), it is fairly easy to get to, and we have always managed to find seats without much hassle.

Hualong Fishhead Steamboat (華龍鱼頭爐) is the zhi char stall, and while we did enjoy the steamboat (which they are famous for), we much preferred the white beehoon! This version is of course, not quite the same as the Sembawang version, however, the $6.50 small version is delicious enough with lots of seafood, like prawns, sotong, and lala, all served on old-school banana leaf!