These two eateries were just a few steps away from each other, and since this was our last night in Shanghai, we decided to have two dinners 😮

What a perfect way to end our last night here 🙂

So we were a day too early previously for its soft launch, and we were back today to check out this place on its official launch day!

Full of Luck Club Canto Kitchen & Bao Bar is opened by the same people behind Li Bai Cantonese Restaurant and it’s signature is mini Baos 包, much like the Little Bao in Hong Kong.

On a Friday early evening on its launch day, it was more than 75% filled on the ground floor, and we were led upstairs where there were plenty of seats.

A hugggggggeeeee cat figurine welcomed us as we climbed the stairs!

Once we were comfortably seated, we were introduced to the signature dishes, and given a few minutes to think about our choices.

END_OF_DOCUMENT_TOKEN_TO_BE_REPLACED

We had originally intended to go Hai Di Lao at IMM, but upon hearing the 3-hour queue, we changed our minds 😛

Walking past the various eateries, we saw a relatively empty Huang Ting, and it was having a 1-for-1 for its $68++ 6-course set meal, which consisted of an appetiser dish of Deep-Fried Yam with Sea Perch Tossed in Mayonnaise accompanied by Black Fungus and Juliene Cucumber in Fruit Vinegar 沙律香芋鲈鱼拼果醋云耳青瓜, shark’s fin soup, Sautéed Live Prawn with Fresh Lily Bulb and Zucchini 鲜百合鲜虾炒翠绿瓜, Poached Angled Luffa with Fresh Scallop and Conpoy in Superior Soup 上海干贝带子丝浸胜瓜, Stewed Mee Pok with BBQ Pork in Hong Kong Style 港式叉烧焖面, and dessert of Cream of Sweet Potato 番薯泥.

The manager was trying to entice us with shark’s fin (which we do not wish to eat), and its chef from the apparently very famous Hua Ting in Orchard (which we have not heard of before)… But they offered a replacement of the soup, and so we decided to give it a try. We opted for the Shark Bone Cartilage Soup 鲨鱼骨汤, which turned out to be really yummy!

We thought that food in general was very fresh and of good quality, and we enjoyed every item, including the hot dessert which was not overly sweet. Of note, the mee pok was thinner than usual but cooked to our liking, not too firm and not soggy.

The wait staff were rather attentive, and refilling of the free warm water was prompt without us having to request. They would follow up with a gentle reminder to be careful of the heat. Each item was served in succession, and very well-paced. Gotta say we left with happy and filled bellies 🙂

We were all hanging around at the dining area of the minsu and the Taiwanese couple shared that they had a lovely Teppanyaki dinner nearby, which they had made reservations 2 months in advance!

The minsu owner added that this was a very popular place, and that 周董 was known to book the entire place for parties (there’s a photo of him at the restaurant) 😮

Since we were checking out the next day and had no prior plans for lunch, she offered to help us make reservations for lunch.

A quick phone call later, and there were still seats available for the 13:10 and 14:10 timings, and so we picked the earlier slot. Thank you 小蘭!

END_OF_DOCUMENT_TOKEN_TO_BE_REPLACED

There was this promotion on Amex cards for DTF so we decided to come here for dinner after running out of options (aka too lazy to think, haha…)

Food was generally ok, and DTF maintained their usual consistency in food taste and quality.

END_OF_DOCUMENT_TOKEN_TO_BE_REPLACED

After our walk from Yung Shue Wan 榕树灣 to Sok Kwu Wan 索罟灣, we deserved a good lunch!

We also missed the ferry by 15 minutes or so, and it was a good 2 hours wait for the next one. The restaurants were well aware of the schedule too, as one called out to us, telling us that it was a long wait to before the next ferry would come and so we should have lunch while waiting, and another one tried to entice us with their private ferry schedule…

We walked up and down the stretch of restaurants (and seeing the ever popular Rainbow Seafood) before finally deciding on Tai Yuen Shark’s Fin Seafood Restaurant 泰苑鱼翅海鲜酒家 and ordered the set for 2 (HKD 248). It was probably the cheapest set available across all restaurants, and the ala-carte menu also had prices listed, unlike some others, so we felt more comfortable eating here.

END_OF_DOCUMENT_TOKEN_TO_BE_REPLACED 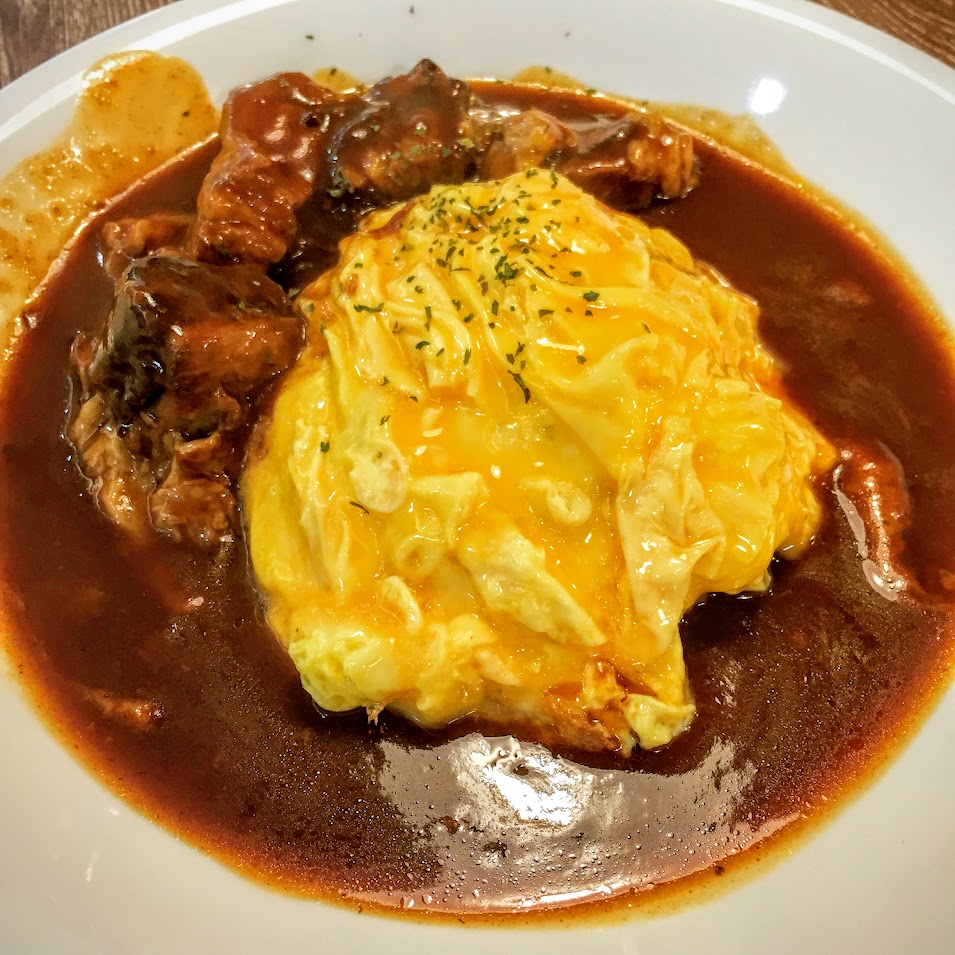 We were wandering within Liang Court and found Pecori Japanese Egg Restaurant rather appealing, with the huge omu rice menu!

The staff offered us samples of the cream, curry and mentai sauces so that we knew what we might be getting ourselves into 😛 Finally, we decided on a Gyu Suji Omu Rice ($16.80, inclusive of GST) and a Roast Demi Omu Rice ($15.80). 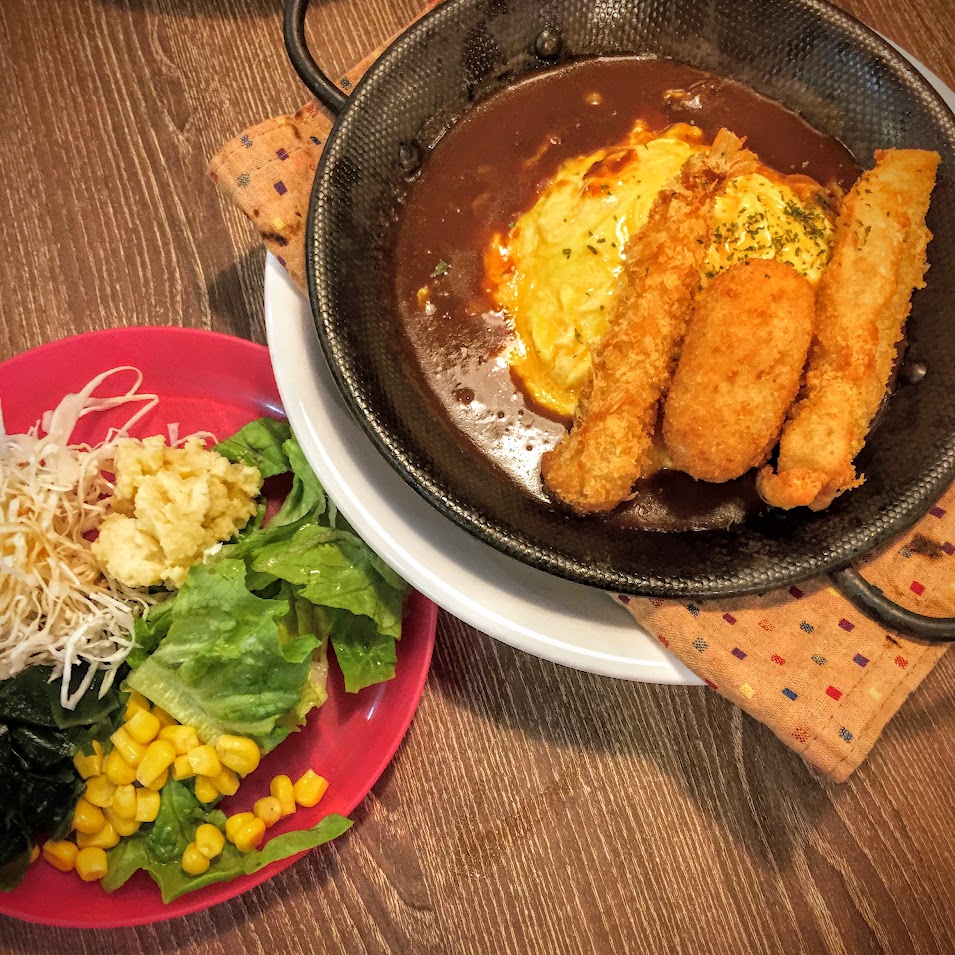 The tomato rice with the slightly undercooked omelette was quite delicious! The beef stew chunks had looked quite tough, but was much softer than it looked. The beef pieces were quite fatty though, so the meat with fats was quite a good combination for hubby, but I was not such a fan. The roast demi omu rice was 3 deep fried items – prawn, mashed potato, and fish fillet. Eaten while still hot, they were delicious!

For this price, we also had free flow salad (+$2 during lunch), soup and coffee/tea. Really quite value-for-money! The salad bar was quite simple, with lettuce, seaweed, corn, shredded cabbage and spaghetti, and today’s soup was seaweed soup. The salad was a good complement to the omu rice, and we enjoyed the meal!

Note: The shop accepts cash only.

END_OF_DOCUMENT_TOKEN_TO_BE_REPLACED

We decided to stroll around the area for something light, and then we saw the SuagrApp sticker at one of the shops.

Oh yar! We could check out the app to see if there was anything interesting nearby.

And so we used the app and found this place! We tried the tapas – Prawn Alioli with Lemongrass & Coriander ($9.80, but only $1 with the app) and Stir Fried Button Mushroom with White Wine Shallots & Kaffir Leaf ($8.50), and were happy with our food! They were really generous with the fresh prawns and the mushrooms were delicious too!

The live band (The Passerby) began their performance slightly before 8pm. We enjoyed ourselves very much with the good food and the great music, loved the ambience!

However, the staff seemed to be in a hurry to chase us away, wanting to clear our plates when we were not done with our food. The minute we finished the pasta, he swopped in to clear the pasta, the sharing plate and all the unused serviettes, so we had to end up requesting for more when we were done with our mushrooms.

Drinks seemed rather expensive here, but there was no service charge or Goods Service Tax.

It was a rather nice place to hang out, would have been better if the service had not been so zealous. Do note that the live music is available only on Fridays and Saturdays.